Of course, it wouldn’t have taken much to improve on last week, but I’m not one to look a gift horse in the mouth. I love that saying. As I type the words, I’m remembering an 18th Century painting of the London Horse Fair. A red-nosed farmer is pulling back the lip of a horse, checking its teeth. In the painting they both have “horse” teeth.

Not look too closely was pretty much what I tried to do this past week. I will admit to making unnecessary trips down to the back pasture to check on Tiny. I’m glad to report she appears to be doing very well. Maybe even unbelievably well. As far as I can tell, she never dropped her fourth lamb. She has produced a good amount of reddish goo, and did have a down day where I worried. Then her eyes brightened, her ears warmed and her nose cooled. And she never once stopped feeding her three little guys.

Mari has weathered this round of births the best of all, thus far. That’s saying a lot for the little ewe that I was advised to “put down” (that always sounds so much easier than the actual doing of it) because her father had broken a bone in her back leg. She barely limps these days, although she is slower than all the others when she runs. She been an amazing mom, which includes keeping her two lambs close. Despite being protective, Mari allowed her little boy to play with me the other night. I put out my fist, he leaned his forehead against it then pushed with all his might as he practiced his head butting. As I’ve said before, sheep have only two games: “Mount you” and “Head butts.” 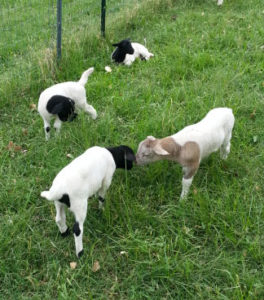 While Mari keeps a close hold on her lambikins, neither Rosie nor Tiny can manage that. For the most part, Tiny takes the disappearance of her three sons in stride. When she calls for them her bleats sound more like “You’ll regret it if I have to chase you” than “Where are you?!” Not so Rosie. She suffers from being a first time mom. This means she gets to grazing then suddenly remembers she has a baby. Her head comes up and turns frantically side-to-side as she searches the pasture for her daughter, who has, of course, disappeared. As you can see from the picture, Rosie’s girl has formed a strong attachment to the Tiny’s albino boy. That’s them, nose to nose. This is probably because he’s her size even though he’s almost a week younger. The other two lambs in the picture are his brothers. Rosie’s girl even sleeps with Tiny’s brood to be close to her special guy.

When Rosie can’t find her little girl, she begins a panicked search. Woe to anyone, or rather any puppy who gets in her way. Poor Radha ended up jammed between a fence and a tree trunk trying to escape Rosie’s “just-in-case-you-even thought-about-hurting-my-baby-while-I-wasn’t-looking” headbutt.

As for Milly, she continues to expand, making me think she’ll have two after all. But she won’t deliver for at least two more weeks. Until then, I’ll practice breathing while I watch the ducks splash and play in the pond, continue to patch my fences each time Radha finds a new hole to slither through, and marvel at how much my new chicks can eat. Being meat birds, they’re supposed to eat a lot and grow fast, and so they do. They’re downright portly and waddle worse than ducks when they walk. But they’re a happy bunch and that makes life good, at least for now.

And sometimes, just like that horse, the gift of now is enough.

← Managing Death
What a day! →