Thank goodness for tenants and my piggy girls. If not for them, my continuing spate of catastrophes would have been hard to tolerate. This last week I discovered a crack in the water pipe leading to the house. How did I discover it? I was working in my kitchen when all of a sudden I had no water pressure. This was instantly followed by a long string of really bad words and a quick walk to the pump house.

On the way I passed my new tenant, who lives in her RV near the water tanks. I said hello to Christina, then mentioned that I was looking for a water leak. “Oh,” she replies, “I noticed a wet spot right over–oh.” We stopped together to view the bubbling pond at the edge of the pump house. No need for further explanation.

Certain the break was in the pipes I had fixed the summer before last, I brought a few spades from under the porch and we launched into a cold and muddy excavation. MIracle of miracles! It wasn’t my repair, a fact for which I was very grateful. Always good to know I did a good job on something. This break was in a different pipe, the one going into the house. The walnut tree next to the pump house that the previous owner allowed to get huge had broken through a coupling.

I mentally chanted out another round of really bad words. This was at least an hour and a half of work, if I could find everything I needed to fix it in the barn, and the water was off to the house when I was supposed to be going out to dinner in half an hour. That’s when Christina won herself her place on the farm. The moment she heard about my plans for that night, she snatched my spade from me and insisted on taking care of the whole mess.

The next morning the water was back on and the pipe was fixed with two rubber couplings held fast to the pipe with metal sleeves. Wow! When did they invent those? All I can say is that whoever came up with it deserves a Nobel prize. Someday, when I have nothing else to do, I’m going to dig out all my other patches and replace the couplings with these.

After waiting a couple of days to make sure the couplings held, I waited until the afternoon when it had warmed up to rebury the pipe. The hole was about half full by the time I ran out of dirt. At that point I had two choices. Either I took the wheelbarrow down to the far pasture for more dirt or I sat on the retaining wall in the sun and watched the pigs. I chose the pigs. 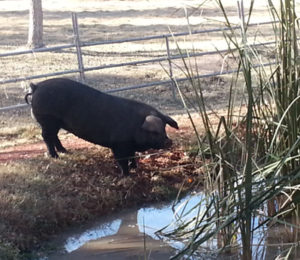 I’d only brought them back up to the orchard that morning and they were enjoying the change in scenery. Two of them were sunbathing on the grass while girl #3 had found a shallow spot at the edge of in the pond. She was flopping from side to side, doing her best to coat herself with mud. Her wrassling had disturbed the pair of ducks who have made themselves at home in my water feature. I suspect these are the same ducks that came to stay last winter. But of course, this piggy girl had never before seen swimming birds. She gave a grunt that sounded for all the world like a large question mark, and took a few tentative steps into the water toward the paddling birds. Back the ducks floated. Piggy girl retreated into her muddy spot. Out the ducks came. Before long she was pacing back and forth along the bank, driving the ducks from side to side. I swear she was giggling as she did it.

That caught the attention of the other two, who came to see why she was doing this. Grunting and barking to each other, they discussed this strange set of birds. Then one of them noticed the irrigation pipe I use to fill the pond. She backed up and used her snout to roll it toward the water’s edge. Half of it dropped into the water and the ducks disappeared into the thick stand of cattails. They waited a moment, then two of them wandered back to their chosen sunny spot.

The remaining girl started to turn away then decided the pipe would look much better if it were completely in the water. She gave it a little shove with her snout. The pipe sank, burbling loudly as it descended into water and settled into the sticky, bentonite-clay silt from which I may never retrieve it. I swear that as she heard that sound a massive exclamation point appeared above her equally massive head. She put her snout in the water and began to blow bubbles.

Just what I needed–a good giggle and a little bit of joy.