If you remember, oh plucky reader, the last time I got chicks–the Brahmas–was two Januarys ago. For their first two weeks they lived in an old cast iron tub that had dirt in the bottom and was covered with several hardware cloth-filled frames to prevent cat intrusion.  This worked really well. Not only did the cast iron tub have round corners, thus preventing chick death from all of them trying to squish into a square corner (a strange chick behavior), but the heat lamps warmed the cast iron which radiated even more heat back at the chicks. However, with thirty chicks they very quickly outgrew that small space and I soon moved them outside the barn into a thrown together pallet-and-baling-twine built coop inside a chicken run.

This year I decided to skip the tub, mostly because I don’t have it any more, and go straight to the south-facing wall of the barn. That’s right, I’m building myself an actual brooder coop. It’ll be both shed and chicken run, all of it either fenced or walled off from any and all intruders.

I love that dog, but he is a killer and of all the things he really loves to kill birds top the list. Because I have raised birds for almost all of the six years he’s lived here, we’ve come to some really hard-fought agreements.

Agreement #1: I must get all my birds into their coops before twilight. If I fail, if one escapes, he gets to kill them.

This is a hard and fast rule with him. He absolutely doesn’t touch any of my birds as long as the sun is up. But the minute darkness falls, if there’s a free bird, that bird is dead.

Agreement #2: He isn’t allowed to eat baby birds, not ever.

He hates the fact that he’s agreed to this rule, but he’s a dog of his word and he abides by it. That doesn’t mean he doesn’t TRY to eat the babies he happens across. Two years ago, just as I was expecting my first turkey hatchlings, I watched a turkey hen watching something in the grass. She studied whatever it was for a long moment, which caught my attention as that’s pretty un-turkey-like behavior. The moment she turned away, Moosie slithered close to the same spot. Because I happened to be looking I noticed him scoop something up into his mouth. Rather than chew on it, he turned and began to walk slowly and way-too-casually away from me.

The lightbulb went on over my head. “Moosie!” I called in warning.

His shoulders hunched and his walk became a definite slink.

“Drop it!” I commanded at the top of my lungs.

Without slowing, he spat out a perfectly unharmed turkey chick and continued slinking back toward the house. I gathered up the chick, who looked a little dazed, and returned it to its mother, who hadn’t realized she’d given birth.

Agreement #3  If new birds come onto the property and I don’t directly identify them as mine, he kills them.  This means each time full grown birds appear on the farm, I have to point to each one and say “This one is mine, you can’t kill it.” If I miss one, it’s dead.

That brings me to the second purpose for my brooder coop. I also need an isolation coop, a place where I can segregate sick or injured birds, or birds I intend to slaughter, as well as a place to temporarily house full grown birds, should I ever again run into a deal on Craigslist.

Moosie isn’t the only animal that will kill a bird new to the farm. No matter what you read on an egg carton, there is no such thing as a vegetarian chicken. Chickens are small tyrannosaurs and, being tyrannosaurs, they don’t like anyone trespassing on their territory. They will gang up on and kill newcomers given a chance. However, if I keep the same new birds penned in for a week in a place where the existing birds can see them but not reach them, at the end of seven days they won’t be unfamiliar any more and all death threats are lifted. Not that some of the other chickens–even their own kin– won’t turn on them at a later date. 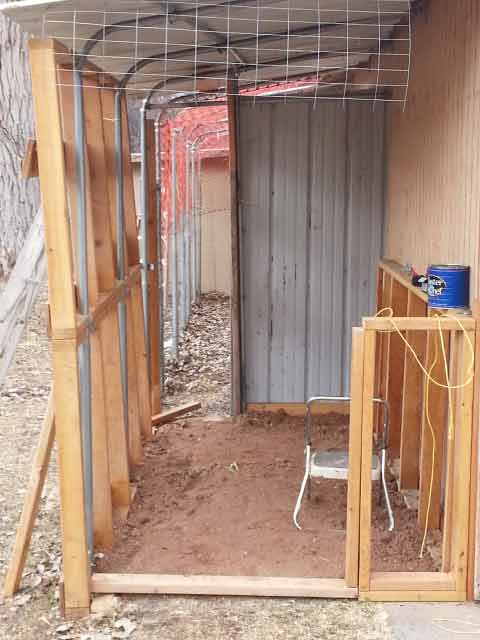 The coop is presently about two-thirds finished and coming together very nicely. I spent part of the day today hot gluing Styrofoam insulation panels for the brooder area. By next week all the brooder walls and door should be in place and ready for chicks.

By the way, I finally decided that this year it’s going to be Plymouth Barred for me, although I think I might go with the Silver Stenciled Barred because…why not?