I’m sitting at my desk, looking out the window at thick dark clouds. Rain, or even snow is predicted for Christmas day. That has me thinking about moving my truck across the road. This is because I didn’t move my truck last year when we had an unusually heavy snowstorm for New Year’s Eve. I was stuck on the property for three days because snow became ice and my driveway has a steep angle.  Not that being stuck at home is a hardship. This year, I took the prediction seriously and stocked up for everyone. Lord knows I won’t starve to death, and neither will my animals. 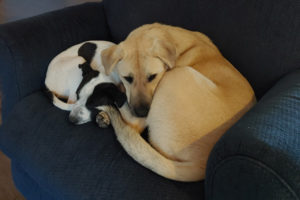 Not that little Rupert won’t assure me constantly that he’s starving. With each day he gets stronger which means he and Radha play harder, going full out until they both drop. Dropping means time to cuddle. Yes, that sign was indeed an omen and I came home with the right dog.

I’ll be interested to see how the rabbits do in their new homes during the storm. I decided that the Solstice was the perfect day to put the girls with Buddy and let him “do the deed.”  Let me say I think it’s a good things rabbits are small and furry. If they were large and covered with scales, watching their mating “dance” would be pretty darn scary.  You do not want to mess with an irate and/or excited female rabbit!  Both girls grunted, scratched, pounding their back feet as they played hard to get. Buddy, however, remained undaunted by their aggression. When they finally agreed that he was their guy, he proved to be seriously confused about how to get it done. I had to lift him off Babs’ back and turn him 180 so he was facing the right direction.

After about 15 minutes they’d done this mating ritual three times, which included him falling off Babs three times. That was what the book said to watch for. And yes, he literally fell off her back, sliding down to lay on the ground as if stunned. (Insert your own pithy comment about this here. Lord knows I did.)

Bitsy fought a much longer battle but she finally gave in and presented her tail to him. Buddy went through the motions, but he never fell off. Thinking I may have expected too much of Buddy for one 24 hour period, I decided to put her in with him again the next day. This time, they more or less ignored each other. Since there’s no way for me to tell if she’s pregnant for a few weeks, I’ll do what the book says and put her back in with him in a week.

However, if Buddy did manage to make babies, both of the does should deliver on the 19th or 20th of January. That means it’s time to start building the bigger rabbit tractor, the one where the young rabbits will spend their days, eating grass and growing fat in the sunshine until, well, you know.  Being trapped here by a winter storm would give me time to finish cleaning up the barn. I need to get the screws and smaller things put into drawers and generally making space so I can work on the pile of recycled wood I’ve claimed from the remodel. Once the nails are pulled and screws removed, there’ll be plenty of wood for new coops and garden gates and things I never dreamed I’d dream of making.

Huh, it’s beginning to feel a lot like Christmas around here. I’ve already gotten some really great presents–the perfect puppy for Radha, pregnant rabbits living in homes they enjoy, and a pile of wood. I think maybe snow on Christmas day might turn out to be the icing on the farm, especially since I brought home milk for hot chocolate.

Happy Holidays to all!