For the past almost three years I’ve wanted one thing: a clean barn. A barn organized the way it works for me. One that isn’t cluttered with stuff that, should the Apocalypse happen, might come in handy. It was slaughtering season that made it happen. Unlike previous seasons, this year I have at least 4 pigs, 2 (more) sheep, and a dozen turkeys to put away before December. I needed dedicated space in the barn in which to work.

Knowing what was ahead of me, I started working toward this moment the day Miss Piggy left us. Back then the barn was so cluttered we were tripping over this and sliding over that while we tried to work. Since that day, great banks of little gray organizer boxes filled with screws, nuts, bolts and washers that never ever got used departed. So did a garbage can full of used/recycled PVC–you know, that valve that still works but you had to cut it out of the pipe so you could save it and now realize that the ends you left on it are really too short to do anything with. Old fencing got donated to the Coalition for Compassion and Justice in Prescott. (Great charity, by the way.) Restore (Habit for Humanity–another great charity) got saved wooden doors and power tools that didn’t make any sense to me and I knew I would never use.

Back in early summer my sister and brother-in-law visited and I put them to work. They tore down shelves, dumped cute little metal boxes filled with saved (bent/rusted) nails, screws, bolts and other strange bits. Then they organized my gardening tools on the walls they cleared. We didn’t have to buy any screws to do this job. Both my ex-husband and my dear neighbor are addicted to screws that come with their own drill bit. LORD KNOWS you don’t want buy screws for which you already have a working drill bit. If I see a screw with a star-shaped opening in its head, I toss it.

Once my accommodating relatives finished organizing the tools, I brought down both garbage cans and asked them to empty the various boxes of plumbing bits, fencing bits, and more of those cute little decorative boxes. It took two garbage truck cycles to haul away all of that. (By the way, my garbage company does their own recycling so I like to believe what could have been recycled was.)

Over the past months I’ve done more emptying and organization. I now have a PVC area where all the different sizes of pipe, valves and fittings have their own boxes, although I’m still sorting those. I also made myself a set of buckets. One contains everything I need to fix PVC/plumbing. I should really just keep that one in the pump house. It’s always up there. The next contains the socket wrench, clamps and bolts I need to fix the gates the piggy girls keep taking down. The third contains fencing repair items–wire cutters, wire, zip ties (hey, sometimes they work) and baling twine (that definitely works). Rather than having to find everything each time I want to do a job, I just grab a the bucket.

Last summer I took apart several home-built items left from the previous regime. The wood was good so I wanted to save what I could. It was almost impossible–it took four different drill bits because…well, see above about screws that need their own special bit. I did manage to get a nice pile of 2 x 4’s, some of them either redwood or cedar. However, not all the screws came out and I refused to stack the pieces until they were clean.

That meant they stayed in the center of the barn until yesterday. Once again armed with two drills and four freaking bits, I set to taking out what remained. I’m sure there are folks out there that can tell me the quick and easy way to do this. I just figured I’d cut out what the drill couldn’t remove. I’m pretty good with a sawsall. That got old quickly.

When yet one more refused to come out, I cursed profusely (I’m pretty good at that, too) in frustration, then noticed my trusty hand sledgehammer behind me. Grabbing it, (and singing the Peter Gabriel song at the same time), I beat the heck out of the stuck screw. Lo and behold! It broke at the wood! All of a sudden a boring chore became fun and I beat out screw after screw. Sledgehammer! 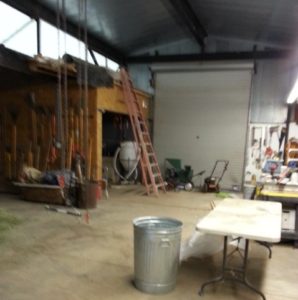 By noon the center of the barn was almost clean. After that, I mucked out the room where seeds were once sprouted for winter cow fodder. That required taking down the plastic doorway strips–the kind they use on coolers–installed to keep that room cool and moist. Hoky Smokes! They were heavy. Even scarier, several very large and, thankfully, very dead wolf spiders came down with them. But the minute they were gone, the whole barn felt better. That room produced two useless heaters, about four dozen empty plastic bottles of Hydrogen Peroxide and vinegar, and one unexpected bag of seeds–intermountain pasture mix! Cool!

Then I moved the flooring that’s stored in there, rearranged the disassembled sliding glass door that I think might one day appear in my bedroom, and found more boxes of unhappy bent and rusted screws. This box may have belonged to my father. I think that was his writing on the top. But when I was done there was room in there for my compost tea brewer, which is where it belongs. Now it’s back in place, ready for next spring. That made space for me to store my mower, small shredder, and my cute little electric roto-tiller against the barn’s back door. They’ll stay there until slaughtering season is over.

Although there’s still more to swamp out and reorganize before the space is truly mine, it is a joy to be able to now see what I need. My barn!