First, an apology for missing last week. I expected to be late with my post because I spent a good part of the previous week immersed in a grand experience. It was my first ever Indian wedding, and the celebration included everything but the elephant. There was incense, chanting priests, blue-faced gods, gorgeous saris, amazing vegetarian food and even Bollywood dancing. However, as my return flight landed in Phoenix Monday night, I discovered that my mother had suffered a serious stroke earlier in the day. Fortunately, she’s made a miraculous recovery although she still has a long way to go. 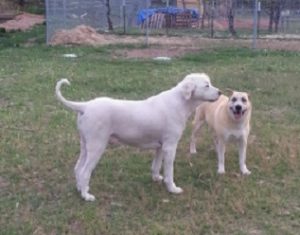 Now onto my de-furred dog.That’s right. It’s that time of year, the season in which Bear loses his fur. I sent him to the groomer on Friday and he returned at least 10 pounds lighter, in need of sunscreen for our sunny days and a thick blanket for our still chilly nighttime temperatures. But boy oh boy, does he look clean!

As usual everyone on the farm has had a different reaction to the annual appearance of the naked Bear. Moosie is annoyed. He’s gotten used to having their doghouse all to himself. Since the big shave, he’s been sleeping outside on the dog couch while his otherwise buddy takes shelter from the cold on the comfy pillows and mattresses in the dog house.

Tom doesn’t recognize the new and improved Bear, which is sort of a relief. From his first day on the farm, Bear has made a habit of running through a flock of chickens or turkeys at least once a day. I think he believes the birds think it’s as funny as he does. Tom has turned frustrated umbrage into his own habit, and makes it a point of charging Bear at least once a day, just to remind the dog not to misbehave.

My ewes have been completely freaked out by the appearance of this strange new creature. The moment Bear made his entrance onto the pastures the sheep came running toward him. They stopped in a protective knot a short distance away. Then, as one, they brought their ears forward (something I don’t usually see them do) and fixed their gazes on him. They watched closely as Bear, who clearly enjoys feeling so much lighter, encouraged Moosie into a game of “Bite Your Tail.” I could see it on the sheep’s faces. Although they recognized his voice and his movements, they couldn’t make those compute with the fur-less creature in front of them. Where was their familiar Yeti?

It’s now day four since the big shave and the ewes remain cautious, Tom is still ignoring Bear, and Moosie has begun to enjoy sleeping on the couch. As for me, I’m thrilled to see the form that was hidden under that heavy coat. About a year ago I took Bear to the vet and was warned most stringently that my now elderly dog weighed too much. I returned home and reluctantly removed all the emergency backup dry dog food that I kept out, just in case. (I have a problem with the idea of anything on the farm going hungry.) This left Bear no choice but to eat his official meal. He and Moosie are on the BARF–bones and raw food–diet. There are days when one or the other, or both dogs turn their noses up at what’s being served. “Really? We have to have pasture-raised pork again?! Yuck. Why can’t we have store-bought chicken?”

Until the fur was off I wasn’t sure how his diet was progressing. I can now happily report that forcing Bear to eat what he’s given has worked. The naked Bear is one sleek looking dog. Not bad for an old man, not bad at all.

2 Responses to A Naked Bear