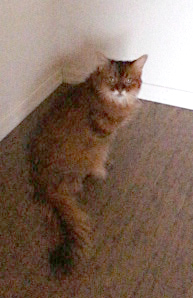 I once again have seven cats living on the farm, courtesy of the new guy in my life. Molly is a Somali Cat, which means she looks more like a fox than a cat. She’s an old girl, about thirteen, and when I first met her, she wasn’t in the best of health. Of course, I couldn’t resist the challenge of restoring her health, but before her rehabilitation could begin I needed her on the farm. More than that, I had to find a way to integrate her into the existing cat hierarchy.

The pyramid of feline power, at least in the house, is fairly simple. My piss-and-vinegar calico Waku Oni (very bad Japanese for “Crazy Devil”) has always been queen mainly because she says so. She’s held her crown by keeping the other two house cats — Wendy, a black tortie, and Shy Girl, a gray tortie– off balance. Her strategy is to ambush them as often as possible to the point that they creep carefully down hallways and always slow down before rounding corners.

How in the world was I going to protect poor, frail Molly from Waku?

I started the acclimation by locking Molly in my spare bedroom along with her familiar paraphernalia. That included her special chair, the one she shares with her guy. And there is no doubt about it…he is HER guy. She very grudgingly allows me time with him.  I’m pretty certain she might actually have challenged me to a duel over him except that I’m now feeding her and she loves her new diet.  What’s not to love? She eats anchovies every day. They’re so good that she almost doesn’t mind the fact that I also smear raw milk yogurt onto her paws and back once a day. Almost.

After a week closed in the bedroom, we began opening the door so she could see what awaited her in the rest of the house. That brought the other cats into the hallway, wanting to see what was hiding in that room. Much hissing ensued and Molly would retreat.

At two weeks, Molly apparently got tired of being a coward. She ventured boldly out of the bedroom and went straight to the living room where the other cats usually spend their day, moving from chair to floor as they follow the sunlight. I followed, ready to referee if necessary.

As Shy Girl saw the intruder, she headed for the door. (She’s “Shy Girl” for a reason.) Wendy looked up, then tucked her head into her body, unwilling to lose her floor cushion and shaft of sunlight. Waku charged, bent on defending her throne. Much to her surprise–and mine–Molly took a warrior’s stance.

That brought Waku up short. She crouched and glared at the Invader. Molly growled. Waku hissed.  Wendy decided it was a good time to visit the outside food bowl.

Waku blinked first and retreated, jumping onto the big green ottoman. Then as Waku watched from above, Molly circled the hassock, her growls growing steadily louder.  Not so much as a tuft of fur flew, but when Molly finished circling that ottoman and made her way back to her room, it was clear that one dynasty had fallen and another had begun. There’s a new queen on the farm, and it isn’t Waku. 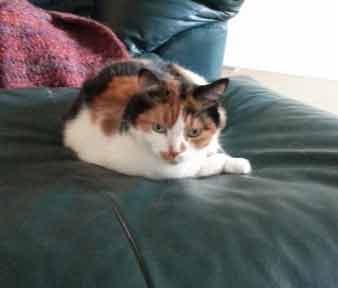 We are now into week four and detente has been achieved. Waku has claimed her last-stand hassock and spends her days sleeping on it, but my bedroom remains hers. Molly still owns the spare bedroom, but now shares the living room with her former nemesis. That’s because her guy’s chair has been moved in there and she hasn’t really got a choice. The other two cats find it expedient to avoid both their old queen and their new one as much as possible.

However, I’m still worried about Molly. Having conquered one queen-dom, she’s got delusions of grandeur. She met Moosie for the first time the other day. Moosie, being the happy creature that he is, instantly grinned in welcome and started forward to introduce himself, tail wagging. Faster than I thought possible for an old cat, Molly shot toward him, howling in threat. He froze in startled disbelief. Heart pounding, I snatched her up before she could reach him. Although I warned her that threatening Moosie is sheer insanity, I don’t think she was listening. Give her a few more weeks and I think Molly will be queen of the farm.

← Turkeys in the Truck
A Brooder Coop →

5 Responses to A New Queen