Well this has certainly been a bad year for my chickens. First the bald eagle harvested a few. Then Radha has taken (she got another one today while I wasn’t looking) a few more. But the other evening I ran into the strangest thing I’ve ever seen since I started keeping chickens.

She was one of the Barred (black and white) chickens. I first noticed her mid-morning. She was sitting on the floor of the coop panting a little. That’s was reasonable enough, considering it was pushing a hundred degrees. But I always check these days, so I picked her up.

In previous years I would have expected even an ailing or injured chicken to try and escape me when I head for them. But that’s not the way these new girls of mine operate. Like all of these Barreds, she let me pick her up, then tucked her head into my elbow.

Uh-oh. That’s a very bad sign. I lifted wings and ruffled her feathers, looking for blood or punctures. There weren’t any. She was a little thin, but not so much that she seemed sickly. These Barreds seem to stay on the more slender side while their cousins, the Partridge Rocks, prefer to carry a little more weight. Then I put my hand on her neck and looked for her crop.

In case you don’t know, a crop is a chicken’s pre-stomach. It’s a balloon-like sac that the chicken can absolutely stuff with food and tiny stones. “Food” for a chicken includes everything from grass, seeds, bugs, mice, lizards, another hen’s eggs, the meat of dead creatures of all sorts and kinds, chicken food, and, always, those tiny stones. The crop then spends the rest of the day slowly sending its contents down to her gizzard, where it’s ground into mush by the gizzard using those tiny stones.

An interesting aside: the stones cause the surface of gizzard to become leathery. That layer of leather has to be removed before a gizzard is edible. I know this, because I’ve been removing that leather for eight years now.

By mid-morning a chicken’s crop should be pretty full. From the moment the coop door opens at dawn, my birds are eating. In this poor girl’s case, as far as I could tell there was nothing in her crop. That had me wondering if she’d been like this the night before and I’d missed her, or if she simply hadn’t left the coop when I opened it in the morning. Just in case, I then felt her abdomen, this time looking for an undelivered egg. Becoming egg-bound is certain to make a healthy hen sickly. She’ll usually die if she can’t move that egg out of her body. Then again, none of my Brahmas died from being egg-bound. They simply stopped producing eggs and kept on consuming expensive organic chicken food.

Another interesting aside (garnered after eight years of slaughtering chickens): Before the eggs become shelled, the yolks cluster in her ovary. So a laying hen can have one fully shelled egg in process and a bunch of yolks in all different sizes from tiny circles to full-sized yellow yolks, waiting in the wings as it were.

I couldn’t feel an egg, so not egg-bound. Not certain what to do with her, I set her back down in a quiet corner of the coop and promised her I’d be back. I returned at 4:00 pm, feeding time. She was where I’d left her, looking weak but not really worse after those few hours. I walked away to hunt for eggs in another portion of the coop, then came back. In that short time, she’d started seizing. I watched as her head shook uncontrollably, and her wings and feet jerked. Then she went completely rigid, her legs stretched straight out and wings clamped close to her body. All except her head, which flopped a little to the side, her eyelids tightly closed.

I snatched her up, certain that I’d just watched her die. Weirdly, she felt like she was already in rigor. I couldn’t bend her legs or move her wings. This is simply not possible. A chicken (and everything else I presume) doesn’t go into rigor mortis instantly. Instead, the body relaxes once the death throes have ended. In a chicken, this means the feathers all drop close to her body if held by the head and fall away from the body if held by the feet.

On this bird even her feathers felt stiff. Not certain what else to look for, I pried open one eyelid. Much to my astonishment, although her pupil was dilated, she was definitely not dead. In fact, I’m pretty sure she was looking at me. Given her strange state, I felt the kindest thing to do was put her out of her misery. But I kept wondering what in the world had happened to her. A stroke? Maybe. Chickens can have strokes, and heart attacks, but that wouldn’t explain the weird rigidity.

Then I remembered the two chicks I lost out of my new batch of meat birds. They both died within the twenty-four hours of arrival, and both of them had a hole eaten out of the side of their beaks. I finally decided these two bold chicks had eaten a bug that had bitten back, and then died from whatever venom or poison was in the bug. 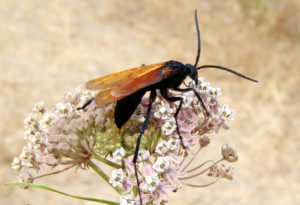 And that brought me to the two most venomous bugs on the property, centipedes and tarantula wasps or hawks, as they’re often called. I’ve seen a hen take on a centipede and she handled it like a pro, picking it up by the head and throwing it over and over until it was stunned enough that she could split its head open with her beak. But that wasp would be a different deal altogether.

Those big, beautiful girls –dark blue with transparent orange wings– deliver a terrible sting, one capable of paralyzing a tarantula (into which they lay their eggs ala Alien) and making a grown man cry. I’ve either seen a dozen of those wasps this year, or maybe the same wasp a dozen times. Either way, the wasp is big enough to look like a moth or a dragonfly to a chicken.

I offered the dead bird to the coyotes, just in case whatever killed her was in her flesh. But oh my goodness, that’s yet another chicken gone! If only I’d known that I was going to lose another one. You see, I stopped at Tractor supply the other day because they’d been advertising ducklings and I decided I needed more ducks.

My present eight ducks, six Pekin (white) ducks and two Rouens (not white), are definitely laying eggs. Although I never see them, not since the puppies discovered that duck eggs are tasty. But if I get to fencing the pups out of the pond, there’s a chance that those duck hens might nest. The emergency backup drake stepped into his predecessor’s webbed feet after that one’s untimely death, and has been making the rounds of all the hens, including the Rouens. And since the puppies don’t bother the ducks (much), I’m thinking I might have ducklings someday. 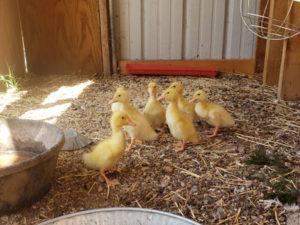 It was my lucky day at Tractor Supply. They had their baby birds on sale for 50% off so I grabbed all seven of their remaining ducklings. They’re loving their new life in the brooder coop, paddling away in a shallow pan filled with pond water and that grass that my first set of ducks loved and still eat, now that they live in the pond. It must be really tasty grass, because these little guys haven’t touched their processed food yet.

But after I put the chicken out beyond the fence, I found myself wishing I’d known this was going to happen. If I had, I would have bought out all Tractor Supply’s chicks as well. At the rate my girls are expiring, I may have to fight the puppies for the duck eggs before much longer.