My apologies to everyone for skipping a week on the posts.  The delay was the result of a perfect storm of events.

First, spring fever hit with a vengeance.  The temperatures soared into the 80s (very unusual) and everything bolted.  Dang.  It looks like I can forget about planting lettuce and go straight for beans and tomatoes.  And that means broad forking or rototilling, raking and furrowing when I’m supposed to be writing.

Next came a trip to my homeopath in Phoenix, which resulted in a detox program.  If you’ve ever done a homeopathic detox, then you know the cure is almost as bad as the original ailment.  Yuck.

Then came the spring allergies.  Everyone, literally everyone I know is suffering from histamine reactions.  We’re all blaming the Junipers, which has a nasty pollen and are blooming like crazy because of the huge amount of winter rain.  My neighbors to the east are bed-ridden and Elana’s whole face is swollen.  My stepdaughter Amberly’s eyes won’t stop running.  Other folks are sneezing or congested or itchy.  Me, my eyes itched some but what felled me was brain fog.  I tried to write–not just this belated post but on the synopses for the upcoming books–but the best I could do was open the files and stare at the existing words.  It might as well have been written in Chinese.

Of course, when I couldn’t write I had no other option but to go outside and catch up on chores. Hey, I have ADHD and no television.  You don’t want to be around me when I don’t have anything to do–the pacing, the compulsive talking, the complete inability to channel all that energy into housecleaning.  Since I didn’t want my face in my blooming garden in case my mild (by my standard of allergic reaction) reaction to Juniper became something a lot worse–anything from constant sneezing to my hips freezing up so I can’t walk. So, what to do instead of gardening?  Why, raise fences of course.  I’m putting in alleyways so I can mob graze the sheep and soon-to-appear piglets.

The worst of the incidents that felled me was Tom.  A week ago Tom’s sons turned on him.  Working together the two younger birds had their father bleeding, somewhat plucked and cowering.  I rescued him, and am now cycling the boys.  Tom is out in the morning and the other two are out in the afternoon.  TommyTwo and Little Tom are staying in the isolation pen at night.  Much to my surprise, they aren’t turning on each other.  Then again, that isolation pen has a bad rep with the flock; it’s where I keep the birds I intend to slaughter the next day.  What made me saddest is that I now this means Tom is on the decline.  I really can’t imagine what this farm will be like without him.

And lastly, there’s is my biggest time drag at the moment:  Peanut.

OMG, he is the cutest little thing ever!  He’s completely bonded to his dogs–especially Moosie–and has even won over the cats.  Waku Oni, my calico, was thrilled to discover that Peanut gets the “night crazies” just like she does.  At about 9:00 PM Peanut starts to bounce and no bounce is quite the same as the last.  Some are straight up, some to the side, some to the back.  After the bouncing comes the rapid tippy-tappying of racing hooves as he tears after Waku, then turns so she can chase him.  Finally, he’ll leap onto the fainting couch to turn circles. Yes, that’s what it’s called.  The couch has a long base for stretching out your legs and a gently angled back just in case some Victorian beauty wants to drape herself over it should Waterhouse decide to paint her portrait.   Shy Girl has come to terms with having a lamb in her space, choosing to watch the other cat play with the alien beast, while Fat Girl has claimed Peanut as “hers” just as she’s done with the dogs.  This means she cuddles with him on his towel and tries to clean his ears.
At almost a month old, Peanut has more than doubled in size and is almost as big as his siblings.  I think this is because he has no competition for his meals where as the other two have to share Mama’s milk.  That he’s thriving so well let me reconnect him with his family.  To do that I confined all five sheep in my orchard and the area between the orchard and the front barn.  Tiny is NOT happy.  She’s accustomed to wandering anywhere she wants on the property and eating exactly what she wants, which means the stuff she likes and not necessarily the stuff that’s good for her but isn’t that tasty.  Now that she and Cinco have cleaned up the tasty grass, Tiny can’t stop complaining. 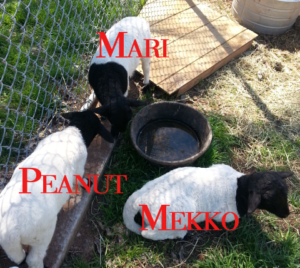 It’s worth the noise.  Peanut is in heaven.  He has completely bonded with his brother Mekko and is slowly winning over Mari.  The three of them practice grazing for a while, then give up “work” for play.  They bounce, run, dash, nap and, when they want to be daring, climb my new hugel, which I have fortunately not yet planted. In their play they’ve kicked off some of the dirt to reveal a chunk of the buried log at its core.  They’re using this protrusion to play “Ram of the Mountain”.  This is the lamb version of “King of the Mountain” but includes headbutting the winner off the wood so that he or she falls to certain death about a foot below.

I show up about every couple of hours with a bottle for Peanut.  Both his siblings find this odd but intriguing at the same time. They’ve both put their mouths on the nipple only to make that face any breast-fed baby makes when confronting plastic instead of flesh.  I thought I might be able to let Peanut sleep outside with his family, but like any toddler as dark fell that first night he began to call for Mama.  So our routine is now that he spends the day with his own kind then cuddles with the cats at night.

As much as I’ll miss his chipper presence in the house (but not the piddling), I’ll be happier when he’s weaned and grazing.  For me, writing means hours of deep concentration with no interruptions. More times than not, I’ll start working only to raise my head from the computer six hours later with no awareness of what’s happened while I was “gone” and no sense that so much time has passed.

I’m taking this post as a good sign.  It means the tide of that storm is turning.  This wave of allergies has passed and one day Peanut will be all grown up.  Yep, Spring has sprung.