I might have written this post once before, but it bears repeating.  My name is Denise, and I’m an addict.  And what, you might ask, am I addicted to?

This time of year is the worst for managing my addiction.  How can I resist when the peach trees are blooming, the plums are coming out all over the place, and the grass is greening up?  No matter that I’ve been arguing with myself about how much work putting in plants requires and that I may be moving in the future. I told myself that I wasn’t putting in a garden this year, that I’d  just take it easy for once. It isn’t working. I NEED to get my hands dirty.

I’ve managed to resist until today, when I was returning from Sedona and grocery shopping. My route home takes me on 89A going toward Cottonwood. As I reached the turnoff for Page Springs Road, I could almost see the nursery. That’s when the voice in my head started whispering.

You don’t have to buy anything. You can just look. Only 5 short miles or so.  Not so far. (That is, if you don’t count the extra miles it takes to backtrack to home.)

I admit it.  I took a fall. Instead of turning, I drove straight on to the nursery, arguing with myself all the way.  No more trees!  Absolutely no more trees.  Flowers maybe, but, really, veggies would be best. They’re easy. That is, if the gophers don’t get them all.

By the time I reached the nursery I’d made a pact with myself. Whatever I bought had to be on sale and obviously healthy. Much to my relief they had veggie six packs on sale for $.99.  Not only were they on sale, but all the plants were over-grown, which was why they were on sale, and there were at least two plants in each of the six cups of the pack. I chose chard, kale, mesclun lettuce mix, and one other lettuce mix that includes an oak leaf variety that always does well here.

Whew. I got out of there having spent only seven dollars and change. That was enough to satisfy my craving and give me the strength to avoid turning toward Cottonwood and Home Depot. This time of year, Home Depot almost always has bare root roses on sale for a dollar or two. Double whew. 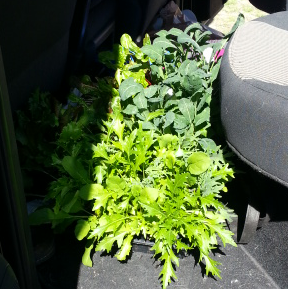 I have to admit an addiction to plants is much better than my original addiction, which was to fabric. I grew up sewing and for many years made much of my own clothing. However, that did not mean I saved any money in doing so. You see, I was completely incapable of ignoring a “good bargain” when it came to fabric.  Each yard offered up endless possibilities, and each possibility fed my deep-seated craving to do something creative with my hands. At last, I realized I would never recover from that addiction, so I gave up my sewing machine and immediately formed a new habit around plants.

At least I can eat the results of this habit, or so I tell myself each time I come home with seedlings. So as of now the clock in running. Unlike the fabric, this addiction is around living things. Because of that I have a rule that I must get these plants into the ground within 24 hours of purchase.

Time to go turn some earth.