First, I apologize for never managing to write a post last week, but, at least for me, finishing a book is like running a marathon.  Everything but breathing and typing are optional.  If it weren’t for the turkeys, I wouldn’t have been outside at all.  And, of course, once the book was done all I wanted was to crawl into bed for a week.  But farming doesn’t allow for that kind of indulgence.  So instead, I settled for crawling out to the barns, opening the doors, then crawling back to the house and pretending to sleep for a few hours while the (supposed) house cats held me down.  That lasted for a day.  By ten on the second day, I gave up and indulged in a third pot of tea.  That’s when I remembered that although the WORDS of the book had gone to the editors, I’d forgotten a few things.  Like filing for my copyright, formatting for the print version, creating the cover for both the digital and print versions.  Ah, the life of an independent author. For all of you out there who would like to be published by a New York house, it’s not what it’s cracked up to be.  Take it from me.  I’d much rather do my own covers, PR, marketing, technical stuff and earn $2.99 per book, then go back to earning  40 cents per book  while having absolutely NO say on what happens to my work.

As for the farm, what can I say?  There’s always something new and different going on here. The surprises started happening after that third pot of tea.  That’s when I discovered one of my black Australorpes had laid a dozen eggs in a tub and was happily sitting on them.  What a quandary! I killed my last rooster two weeks ago because I caught him trying to batter one of the hens to death, just like his father and brother had done before him.  That simply doesn’t wash with me and he breathed his last.  So, had that hen laid those eggs before or after the rooster went the way of the dodo?  The answer came on Friday when she began to hatch out the cutest little black and yellow chicks.  Pop, pop, pop, suddenly there were 8 with 4 more eggs to go.  I couldn’t leave them in the tub, not when the babies could slide through the layers of plastic chicken wire and die.  So I grabbed my trusty blue bucket, gathered up the babies and took the little family into the turkey barn.  Mama settled in happily and by this morning she had two more chicks and had left the last two eggs to show her shiny new babies a shiny new world.   I quickly carried those eggs into the brooder barn and tucked them under the poor pathetic turkey hen who has lost every chick or poult she’s hatched to some other marauding mother, whether chicken or turkey.

Then on Saturday evening I went to check on Gabby Gray.  After abandoning the eggs I’d transported from the blackberries into the brooder barn, she’d returned to the blackberries to lay a second batch.  At least she chose a better spot this time, so close to the fence the dogs could press their noses against any predator that tried to go after her.  But, because I’d stolen her from her last spot, she’d dug into the thorns even more deeply.  Worse, every time I tried to leave her a little can of water, she shoved them to where I could reach them without losing skin.  So, the best I could do was throw the occasional handful of black oil sunflower seeds at her.  That’s where I was Saturday night, getting ready to launch seeds over the fence at her, when three little heads popped out from underneath her!  I returned Sunday morning with yet another can of water and a pile of food.   There were a dozen little guys under her by that point with two eggs yet to hatch.  By that time I was biting my nails worrying, about what might happen overnight.  I really need those babies!  I was sleeping with half an ear tuned to the outside when, sure enough, at about 2 AM I heard the coyotes.  So out the dogs and I went to patrol the fence for an hour or so.  By 7 AM this morning, she and her brood were in the brooder barn with those two unhatched eggs shoved under that pitiful broody girl.  (Do turkeys suffer from postpartum depression?  You bet they do!) 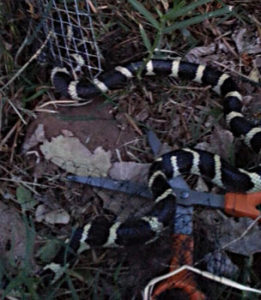 Meanwhile, last night as I was walking back from closing up the chicken coop, Moosie stopped to investigate something.  My first thought was that it was a poult left behind by its mama.  It wasn’t.  It was a king snake that had somehow managed to shove itself through the layers of bird netting and hardware cloth I’d wrapped around the trunk of my ditch-side peach tree.  Beaver protection.  Now, I haven’t seen a beaver since the creek changed course, sending most of the water around the opposite side of the island.  I armored that trunk after that beaver took 1 nectarine and 2 peaches and forgotten it.  Since I love King Snakes–not only are they beautiful but also hard workers–I wasn’t about to let it die, I got my gloves, scissors and wire snips and went to work.  It took almost a half an hour to free the poor thing.  He/she wrapped him/herself into a knot as I carried it into the fenced garden where Moosie couldn’t play with it.  It was gone this morning, so I’m choosing to assume it went under its own power. 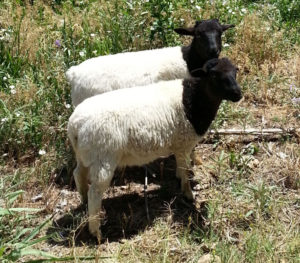 Then this morning, the urge couldn’t be resisted a moment longer.  I got into the car and drove to Mayer where I bought myself three Dorper sheep.  Tobey and Tiny are both 3 months old, born in February.  At 20 pounds each, they came home in the back of my little Focus in a dog crate, baaing the whole way.  Tobey definitely has a boy voice while Tiny’s voice is all sweet little girl.  Little Cinco (born on Cinco de Mayo), the ram who will hopefully make more sheep via Tiny, will stay with his mom until July when he’s weaned.  This time the surprise was on the dogs.  They aren’t quite sure what those little creatures locked in the orchard garden are.  Just in case Moosie gets any ideas (he’s creeping over to the orchard fence as I type this to have yet another look at them), I spent an hour telling him that these creatures are MINE!  I’m hoping he’ll do with them what he did with the calves, figure they’re some sort of odd-looking dog, then adopt them as his own.  It’s nice to see the little guys finally moving around the overgrown orchard and taste a bit of this and that.

I’m hoping that’s the last of the surprises for the week.  It wouldn’t do to discover that the twins are able to eat a small apricot tree overnight  It’s time to start stringing that electric fencing again.  Yep, it’s always something.

One Response to Always something new