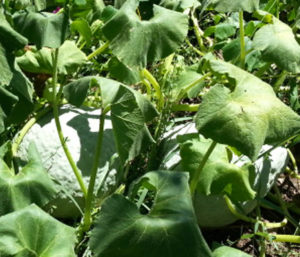 It’s been an interesting year for squash here on the farm. Early in the season I planted Hubbard squash from a three-year-old package and spaghetti squash seeds from a package that was even older. Much to my surprise, they went crazy.  I have three huge Hubbard squash ready for me to take …where? Where the heck do you keep a squash that big and can I even lift it? The spaghetti squash is producing like crazy, which is nice. This is one squash I really enjoy, having learned to love it back when I had to be gluten-free.

These squash are planted in the orchard garden and when they began to take over the world, I guided their tendrils up the chain link of the orchard fence. I was mistaken in thinking none of my critters would eat squash vines. I mean, seriously? Who eats something covered with stinging little hairs? Obviously, I was wrong. For the past two months, right around the new moon and the full moon, the sheep and June the cow make their way to the exposed vines and eat them until they’re gone. Hmm. Pumpkin seeds are recommended for de-worming.  I wonder if squash vines work as well as the seeds?

My summer squash has completely betrayed me. I planted six zucchinis. When I mentioned that to someone, that person laughed and asked what I was going to do when I was knee-deep in zucchini. I wish!

It’s official. I’m the only person on the planet who can grow a healthy zucchini plant yet not get enough squash to make vegetable lasagna. This was another innovation of mine from back in my wheat-free days.  I would thinly slice zucchinis, eggplant, and portabello mushrooms then grill them. After that, I layered them with fresh basil, mozzarella, and ricotta cheeses, and some sort of red sauce and baked for about 20 minutes, until the cheese was nice and gooey.

I’m not entirely certain my squash is infertile. I suspect there may be a pesky family of squirrels that are coming by for their daily nibble of baby squash.  The plants are so big and healthy that no one, not even Moosie, sees them.

As for my lack of crookneck yellow squash, I blame myself. Silly me. I was trying to avoid squash pollen contamination and put these guys in the garden right below the road. With all the rain, I’m thinking they’ve been poisoned by cadmium wash off.I guess it’s okay that they didn’t produce. I don’t think I’m deficient in cadmium.

But what I miss most this summer is cucumbers. Like the other curcurbits, I emptied an old seed package. Out of ten seeds I got three healthy plants. Not bad for a seven-year-old packet. When it came time to transplant, I again searched for a spot that wouldn’t allow them to cross with any of the other squashes. I ended up planting them right next to my entryway stairs then installing a couple of handy panels for them to climb.

I immediately lost two of the plants to something. Snails, most likely.  I really need ducks, especially this year. The third plant went crazy. It was healthy beyond healthy, with leaves at least twice the size of any cucumber I’ve ever grown. I harvested one gorgeous and delicious cuke, admired the dozen other babies that were setting on…sigh. Then the farmer ants appeared.

Lordy, how I hate those critters. It’s bad enough that aphids show up on their own. It’s far worse when they have swarms of tiny little protectors armed with stinging bites. The ants and I are presently engaged in an epic battle. I have spent time squishing the aphids and spreading their guts all over their home leaf. There’s good scientific evidence that bugs won’t repopulate an area where their brothers have died. However, this isn’t something I do every day. Not only is it time-consuming, I don’t really like getting aphid slime all over my fingers. I sprayed the plant with the hose, knocking off a good bunch of those little sapsuckers. The ants redoubled their efforts. So did I, adding soap to the sprayer. That dropped the number of aphids, but a few days later the ants had regrown their livestock numbers to overwhelming. 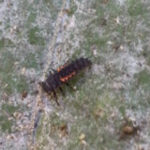 That’s when I pulled out my big guns. I covered the stair rails, the leaves, and the ground around the plant with diatomaceous earth.  Of course, it immediately rained and washed away much of that fine powder, so I started round two. While I was spreading it the second time, I turned over a leaf. Standing tall on their delicate stems was a line of green lacewing eggs. I quickly flipped over another leaf and found tiny ladybug larvae. On yet another leaf was a clutch of golden Assassin bug eggs. Reinforcements have arrived!

That sidelines me and my heavy-handed interventions. What kills aphids also kills the aphid eaters. I checked again this morning and found the backs of a few leaves populated with nothing but three ladybug larvae. I can’t say I’m hopeful that my plant will produce any more cucumbers this summer, but at least I’m not in this fight by myself anymore.

I’m finding it hard to be patient, which means I’m still considering the nuclear solution. I’m thinking about mixing up 50%-50% batch of boric acid and sugar, and piling that all along the ant line. Feed that to your babies, you little cucumber decimaters!

2 Responses to An Epic Battle