This is it. The thirty-first day after Babs and Bitsy spent “quality” time with Buddy. Today, Day Thirty-one, is the day that the girls should kindle. That is, give birth to baby bunnies.

Needless to say, I’m waiting with bated breath, watching, wondering, and, well, worrying that they aren’t actually pregnant.  This time, it’s Bitsy who’s giving me hope. She’s putting on quite the maternal show.

Just as I did back in January, by Day Twenty-seven they had their baby boxes in their hutches. Babs’ box was still filled with her careful layers of straw and fur. The minute I set down the box, she began adding more fur. But she did that last time and never gave birth. 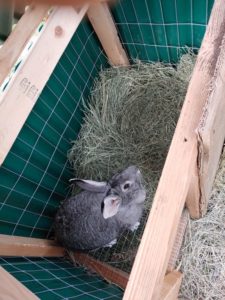 Last time, Bitsy, whose personality is anything but bitsy, tore the cardboard out of her box. She immediately did the same thing this time. Disheartened, I opened the lid of the hutch to remove her box only to discover she was building her own straw nest behind her box. I figured she had the right to decide what she wanted to use for a nest. I removed the box and gave her more straw. She made quick work of filling her whole private area with an awesome nest.

It’s her unexpected nest building activity that’s keeping my hopes up this time even though there was no sign of labor yet today. I’m telling myself that, because rabbits are generally nocturnal, perhaps the babies will be born tonight. And if there aren’t any babies in the morning? Well, that would definitely be the end of Buddy. It may also be the end of my attempt at rabbit raising. 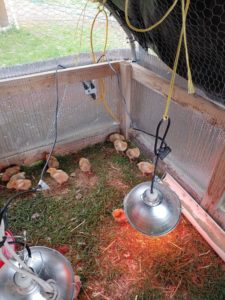 However, there are new babies on the farm. Once again, I’m raising chickens for meat, and once again I chose to order the birds that I know as Red Rangers but have been re-branded by the hatchery I use as Big Reds. Not only do they fare much better on grass than the Cornish Cross, they’re so much prettier.  I’m thinking about upping the number I order this year, which would mean building another chicken tractor.

Before I do that, I’m going to chew my nails for another twenty-four hours, waiting to see if I’m also building a baby bunny tractor. Come on, bunny girls! You can do it!