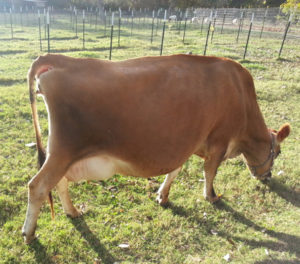 So here I am, another week older and I still don’t have a new calf (or milk) and I haven’t finished that #$%^@ book! That said, the book is much closer to being finished than it was a week ago because I finally figured out whodunit. (Praise be! I had myself completely fooled.)

June is also much closer to delivering.  Poor thing is completely miserable. She spends most of her day lying down. Yesterday I watched her try to stand up. She rocked on her front legs three times before that back end even left the ground. The size of her udder suggests she’d going to be a four-gallon-a-day girl. That’s good for me and cheese making.

However, this is another expectant mother on the property who did complete her mission. That Lynx spider now has hundreds of little babies popping out of her egg sack, which you may recall she moved onto my parsley plant. I can’t say they’re adorable, but they are certainly welcome additions to my garden. Speaking of spiders, I ran into another impressive specimen the other day. I think she was a very large yellow garden spider, which Wikipedia named Agriope Aurantia. Her web was almost two feet across and had a very distinctive zigzag line near the center. I’m sorry I didn’t get her picture, because her legs were covered in the most cheerful yellow and green stripes. Before I got to my phone her web was accidentally destroyed during a rush of yard work.

Speaking of plants (we weren’t but let’s do), several years ago I got dinged in a review for one of my mysteries by someone who said unequivocally that flowers that bloom in the spring won’t sprout or re-bloom later in the year.  For the record, I once again protest that this simply isn’t true. This year proves my point. The combination of lots of rain and a string of warm days after a longer string of cold days has resulted in a huge sprout-out of plants in my 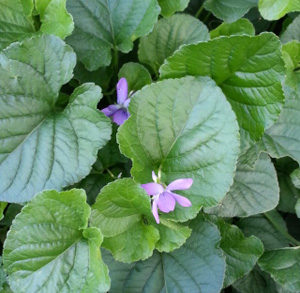 pastures that don’t usually grow this time of year. That includes cow peas and chicory. My violets, usually spring-only bloomers, are putting on a beautifully scented show. The scarlet runner beans were on death’s door, but are now regrowing and offering up their pretty red blossoms. I’ve got to figure out why those things bloom so well but never give me any beans. My squash plants, which should be giving up the ghost, are instead setting on new squash like crazy. (Yes, I know the new squash won’t make it to ripe.) So are the tomatoes. Even my fig trees have suddenly exploded with a  new batch of figs.

This warm spell has been a bonus for my piggy girls. I brought them back up to the orchard pasture so they can again swim in the pond. Look out, you tasty little green froggies with golden eyes!  The pigs aren’t the only ones interested in those frogs. Shy Girl, my remaining Gray Torty, has taken to sitting on a log out in the water to chase those little frogs. She came in wet the other day. I’m guessing that log isn’t as stable as she thought and she was swimming with pigs. She did not appreciate my laughter.

And, there you go. Yet another disappointing, calf-less week on the farm. The only positive is that coyotes circle the property every night hoping to get lucky and that keeps the dogs busy. All that running has been good for Bear’s middle-aged spread. I might have to join him in running the fence line if I don’t finish that book soon. But the way I’ve got it figured is that somehow June and I are inextricably tied, each of us waiting for the other to deliver the goods. So, it’s back to Chapter Nineteen for me.

← Nothing ever changes here
Sadness →

2 Responses to Another disappointing week