I missed my Monday deadline because a HUGE storm blew in.  The winds were so strong that my grill went skidding across the porch until it hit the table.  Cushions were flying.  Taking an cautious approach, I turned everything off for the duration.  And then I didn’t even lose power.  Go figure.

So right now, I’m typing as fast as I can as yet another storm makes its way in my direction.  The wind is picking up, so wish me luck. The first thing is to let all of you who have offered explanations regarding Boinker’s name, yes, I know that the British use the word Boink as a euphemism for something that Boinker will never do in her short life.  I don’t care.  If you could see these two little shoats play, bashing snouts against each other, the American version of “boink” is very apropos. 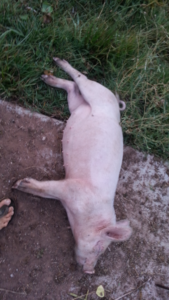 As for Boinker, she is definitely “Sum Pig”.  What a character! She loves getting scratched.  This is because she’s a little white pig in Arizona.  Rather she would be a little white pig except this is Arizona.  That makes her a little PINK pig.  The poor thing sunburns. Next time I’m getting black pigs under the assumption that they won’t sunburn as easily.  But you know that thing about “Assume-ing”. However, I feel I have gathered some evidence in support of my assumption.  Oinker, who has large black spots doesn’t seem to burn as easily.

Anyway, because Boinker is always peeling, she is far more open to being scratched than Oinker, who remains shy.  And Boinker does love her scratches.  As I work my fingers along her spine, her eyes close.  Her back arches.  If I keep it up, she begins to list.  Then, as I continue scratching, she crumples, falling onto her side.  Her little piggy legs go stiff and straight, her eyes close, her mouth partly opens.  At this point I can scratch her belly, her legs, her sides.  She doesn’t care.  In fact, for all the world, she looks as if she’s gone into some sort of catatonic (pig-atonic?) state.  As you can see from the photo, she pretty much looks dead.  Or exceedingly happy.

And two of them do seem happy in their new home.  I mean, what could be better than an airy little house that protects you from the sun while you root happily in rich soil full of worms, grubs and other subterranean life?  When you’re tired of doing that, you can run out into the pasture and chase the sheep.  B & O have discovered that they’re just tall enough to reach the stray hunks of wool that are presently peeling off the sheep.  This causes the sheep to startle but it doesn’t seem to scare them much, because after the pigs are done nibbling at the loose fiber they all go off and graze together.

A number of people have asked me about allowing my turkeys and sheep near the pigs.  They usually follow the question with a horrendous story about somebody’s hogs killing a chicken or dog or cat or whatever. Allowing my turkeys? Like I have a choice?

It may be that such murderous events await in my future. (Yes, those are my toes in the picture with Boinker and, yes, I’m reconsidering entering the orchard with my toes available for nibbling–Oinker tends to eye them with more interest than Boinker.)  But at the moment, this is one big happy family here on the farm. 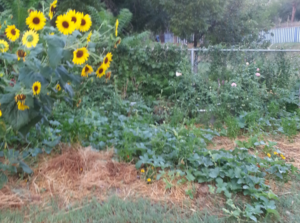 As for the storm, it’s circling and I’m hoping.  I still don’t have A/C and the storms always make the temperature drop.  They also bring the rains that have turned this place into a veritable jungle. For example, here’s a picture of that lasagna garden I started back in March.  Today, the straw almost completely covered with Crenshaw melons, tomatoes and peppers.  The sunflowers I transplanted and the roses I put in the tubs are going great guns despite the heat.

On the whole, everything’s out of control.  The pastures are so thick that the turkeys have carved paths through the foliage.  I’ll bet it looks like a crazy map from above. The pathways are disappearing under grass and the…wait!  Who is that masked man operating that new wheeled weed whacker?  Okay, it’s not a mask, it’s an orange helmet with a mesh face guard, worn by my renter Derek.

That’s right, I’ve been tool shopping again.  I not only bought myself an electric hedge trimmer (works on Quack grass), I got its sister the electric weedwhacker (good for tight spaces) AND the new wheeled weed trimmer.  It’s Derek’s new toy at the moment.  It pushes like a lawnmower but has a string cutter instead of blades.  This means the machine can go over rocks, tree branches, piles of who-knows-what and still be cutting grass.  My neighbors Al and Elena got one first and I fell in love.  If I don’t have to work first thing tomorrow morning, and if it doesn’t rain tonight, I’m taking it out into the pasture for a test drive.  Whoot!

← Elsie
Yet more storms and catsup →

One Response to Another storm’s on the way