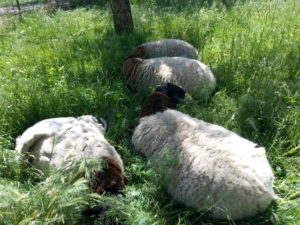 Back when I first starting writing historical novels, I fell in love with a folk group with the odd name of Steely Eye Span. Their music set the mood for my first few books. On one of their albums (I had cassette tapes back then, but graduated to disks, then put them on my computer where they’ve been ever since) was a song called “A Rosebud in June.” It’s definitely a spring song, starting with the line: It’s a rosebud in June and the violets in full bloom, and the small birds are singing love songs on each spray.

Of course, here in Arizona, the violets have already bloomed, as have the roses. But I definitely have small birds singing love songs. Wait. Those aren’t love songs. Instead, those sweet bird calls are actually songs of war, declarations that “Sweetie, mate with me because if anything gets close to my nesting territory, I will employ all my might to kill it–or at least drive it off.”  The Cardinals and Western Tanagers are already at war again, chasing each other out of the fruiting mulberry tree. At least their battles are beautiful, what with the tanagers being yellow, black and orange while the pursing cardinal is a brilliant red.

The point of introducing the song was because of this verse: We’ll pipe and we’ll sing love, We’ll dance in a ring love, When each lad takes his lass all on the green grass, And it’s oh to plough where the fat oxen graze low, And the lads and the lasses do sheep shearing go.

That right. My pregnant ewes were sheared yesterday, and thank heavens for that! One of the promises of Dorper Sheep is that they lose their hair–they are called hair sheep because their “wool” isn’t usable wool. As my faithful readers may recall, last year Tiny, my matriarch, lost all but a patch of wool on her back which she managed to turn into felt. Also last year, I finally had Mari sheared, because she didn’t drop so much as a strand. This year, both Rosie and Petunia lost some but not all and ended up looking like Rastafarians on acid. Mari again lost nothing, and her daughter Millie clearly takes after her. As for Tiny, she was so uncomfortable that she was willing to stand still and let me tug tufts of hair off of her.

So Jason the Shearer came. I thought I was ready for him. I had the girls locked in the orchard, trapped where they might be easier to catch. I thought that because they’re pregnant they might be slower.

You can guess where this is going, can’t you?

The girls knew without even being chased that whatever was happening here wasn’t something in which they wished to participate. Even three months pregnant they were unbelievable fast. And agile. At once point, Rosie vaulted four feet in the air to escape the shepherd’s hook. Even Tiny, who is the largest of them despite her name, managed a good number of leaps, pirouettes, and vaults. I started out in the corner of the orchard, to be available if help was needed, but quickly retreated out of the danger zone after Petunia slammed into me.

Kudos to Jason and his assistant! Shearing is as dangerous as herding irate dairy cows. Jason said, as he did when he came to shear my former (and very tasty) ram Cinco, “Man, have you got athletic sheep!” I guess that’s the problem with not keeping them confined to a small space. The more they walk, the stronger they get.

It took about an hour before all five were once again healthy-looking (as in not as fat as I thought) black-and-white sheep. Once they calmed down, it was clear they were all very much more comfortable, especially Petunia who was no longer being followed by a long tail of knotted wool/hair. And here I’d been giving myself grief, thinking I’d let Tiny get fat. It was only her wool/hair. Although she’s clearly bigger than her daughters–even Rosie who was made pregnant on the same day as her mother, and granddaughter. But then, Tiny likes to produce big babies. Fingers crossed that she doesn’t do that three lamb thing again. If she does, I know what she’ll do. She’ll once again send me the look that says, “I’ll take these two, you, strange-looking-two-legged sheep, can have that one.”

I’ll deal with that in July. All I care about is that after Jason left, Tiny lifted her head to me, wanting me to press my nose to hers as she accepted my apology. Boy, has she got me figured out.