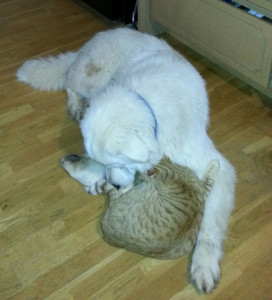 I’ve been trying to catch this photo for more than a year now.  This morning I turned around in the kitchen and there they were, doing what they do.

Bear and “Adventure Boy”, as the orange tabby is called when he’s not called “Little Orange Thing” or “Hey you! Get out of that!”, bonded almost as quickly as Moosie and Bear did.  And it was clear from the beginning that Bear thought about Adventure Boy as his pet.   Bear cleans him, nibbling at burrs and such, and wraps his paw around him to keep him safe. They sleep together outside on cold winter nights.  The poor little orange thing doesn’t have a choice if he wants to sleep with his “owner”.  Bear, being a Kuvasz, is “almost impervious to inclement weather”.  This means that throughout the last rainstorm Bear was sleeping in the middle of the parking area enjoying the cold and wet.  That pretty much makes him a brown dog and results in him being banished from the house.

At least he’s got the cat to keep him company.