For the record it turned out that six sheep is better than simply sufficient. Having just the new moms and their babies has been both peaceful and easy.  Tiny only calls now when one of her babies is lost (this usually means on the wrong side of a fence) or she wants me to open a gate. She’s even stopped bawling for breakfast, although this may be because my grass has finally come in.

It’s beautiful here on the farm just now!  Although last year’s pig attack on my Dutch irises have set back their bloom for this year, the water irises are literally bursting out. The air is perfumed with the scent of violets–that’s how many are blooming at the moment. My Cottonwoods have leafed out in a glorious green-gold color and the apple trees are beginning to bloom. The peaches, plums, and apricots have all set on, and so are my new cherry trees! Whoot! 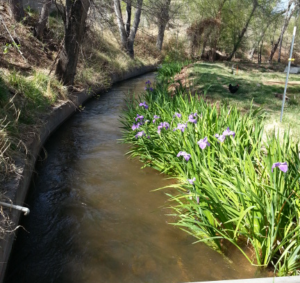 Oh, wait. I’m moving. What if some of the blossoms actually get pollinated and the trees bear fruit, and I’m not here to harvest them? That would be sad. I love cherries.

Such is life and starting over is just what I do.

Now, onto Bear. For about half my life I’ve been a cat owner, believing I preferred felines over canines. This is because I write, which requires many hours of unbroken quiet. Cats on the whole don’t want or need much interaction. Dogs, on the other hand–at least judged by my experience with dogs prior to Moosie and Bear–were a lot more needy than cats. Then these two dogs came along.

Maybe it’s because of their personalities, or that they work all night and have to sleep all day. Or maybe it’s because they have lots of room to run and a job to do. Whatever it is, they simply don’t ask for much input on my part, which it turns out is good and bad. I haven’t been paying quite enough attention to Bear.

Most of the dogs I’ve owned have been adult rescues. While this spares me having to housebreak, older dogs come with a past. (Don’t we all?) In Bear’s case his past includes having either been dumped or gotten lost from his original home, then nearly starving to death before someone took pity on him. While being lost he was shot in the hind quarter. Although the wound didn’t cause serious damage and he healed without issue, it left an emotional scar. He hates having his back legs touched. Hates, as in puts his teeth on your hand to warn you away. Despite his sweet-nature, he regularly gets fired from groomers because of this. Combine that with the fact that he has dewclaws and you’ll begin to see where I’m going.

Sigh. Maybe if I were a more experienced dog person, I would have noticed that the nails on those vestigial toes needed to be trimmed. I only realized there was a problem because he started chewing on his back paw. Because he does see a groomer, I assumed (and you know what that means) she was clipping them. Silly me. See above about what he does when someone touches his back legs.

I tried clipping them myself. Impossible. No amount of reassurance could convince him to allow me near his paw.I recruited a friend who’s really good with trimming animals’ hooves and such. Suffice it to say that our best efforts didn’t last more than five seconds. So today I took him to the vet.

Minutes later he was muzzled and, snip-snip, his nails were clipped. While they made it look easy, the vet’s suggestion for me, should I want to do it myself, was to either build a dog stanchion with a head lock or a small squeeze chute, the sort they use for cattle. The third option was to bring him back every few months and have them do it. That’s the most likely option. 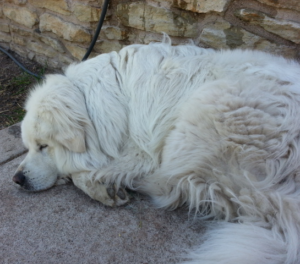 But that means Bear, who weighed 130 pounds last year and tipped the scales at 145 pounds today, will have to get on the scales again in just two months. Bear is four going on five now. For a dog his size that puts him around 45 to 50 in human years. He already suffers from arthritis, no doubt because he’s a purebred. Although CBD oil and fish oil have made his life better, losing weight can only help.

That’s right. My dog needs to go on a *gasp* diet. Those necessities are indeed getting bare for him…

← Eight is Enough
Into the Drink →