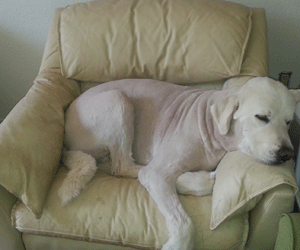 So Bear gave me a scare last week. It was my fault because somehow I managed to leave two creekside gates open overnight. I swear the heat pickles my brain, but I’m unwilling to give up garden time just because it’s 104 degrees.

At any rate, the gates were open overnight and, to the best of my knowledge which is based on listening to Bear and Rupert barking at night, no one went on walkabout in the dark. In fact, all three dogs were on the porch in their favorite chairs when I got up at 4:00 AM. I went out to greet them as I usually do, then made tea and started my morning.

They were still on the porch when I left the house to do chores. It wasn’t until I was making my way back to the turkey barn that I noticed neither Radha nor Bear were following me the way they usually do. Rupert was, of course, right beside me because that’s where Rupert is when we’re doing chores. I assume this is because he knows he gets fed after all the other critters and he’s making sure I don’t forget that.

Since the absence of the two big dogs doesn’t really mean anything in general, I finished up my chores then went up to the house. I stopped on the porch, surprised that they weren’t waiting on the porch. Let me say, no one ever misses breakfast here. I went inside and brought out two metal dog food bowls and banged them together a couple of times. “Dogs!” I called. “Breakfast!” Then I went back inside to fill those bowls.

Radha appeared a moment later. She offered her usual comment regarding breakfast, which is “Roo-roo-roo-rah.” She’s quite the talker. When all three bowls were full, I returned to the porch. No sign of Bear, who moves at about the same pace as a glacier. I called for him a few times. Concern deepened when there was no response. I fed the other two and went down to walk the property.

That’s when I discovered I’d left the gates open. That also told me where both Radha and Bear had gone while Rupert was helping me do chores. But if Radha came back to eat, where was Bear?

Concern became worry. The old boy is closing in on the end of his life. What if he’d seen the open gate as a chance to go die in peace?

I closed the gates, certain that Bear would be home soon. He never misses a meal, and if he didn’t want to wait outside the gates, he knows his way around our very large neighborhood pretty well. In their misspent youth, he and Moosie exploited every opportunity to escape the farm and everyone in the neighborhood got to know them, whether they liked it or not. (Moosie had a habit of bringing dead skunks as a welcome gift to newcomers.) More importantly, all my dogs are micro-chipped and I knew I’d put a tag on Bear’s collar inscribed with my phone number. I also knew that Bear would walk up to anyone he met and beg for pats. It wouldn’t be long before I got the call to come pick up my dog.

Only I didn’t get that call. By noon, I was really beginning to worry. Putting his leash around my neck, I took off across the creek to see if I could find him. As I walked the island I ran into a couple of laborers. They hadn’t seen a big dog, but promised to return him if they found him. On the other side of the island I met new neighbors who have a spectacular garden. We chatted about that, and they also promised to let me know if they found him. At Grace Groves, the retreat center that is my most direct across the water neighbor, they remembered Bear well. I got another promise of a call.

By then, I was sure Bear had found that private spot and left me. Dispirited, I took the long way home, calling for him. I didn’t find him, but I did scare up a barn owl, which thrilled me, and I had to swim the creek in the wildest area. That wasn’t exactly a hardship on a hot day.  Once I was home, I waited. If he’d been found, someone would call.

No one did and Bear didn’t show up for dinner. I just knew he was gone for sure.

The next morning while picking green beans (two and a half pounds worth), I realized I’d forgotten that we have an on-line community bulletin board. I resolved to put his picture on it as soon as I was done, just in case. At almost that same instant, my partner called down to me from the porch. “They found Bear! He’s at the Humane Society!”

Off he went to claim our lost dog while I wondered why no one had called me. As it turned out, Bear’s tag had disappeared from his collar and the rescue organization that installed Bear’s chip had not done as they said, and updated his information with my name and number. That’s changing this week.

As for Bear, he’s very glad to be home. I asked him what he thought he was doing at his age, wandering the neighborhood like that. Here’s what he told me.

“The gates were closed so I had to walk the long way around the property. When I met them, they asked me if I was lost. I told them no, that I was just late for breakfast and could they give me a ride home? They let me get in their car, but they didn’t take me home. Instead, they took me to this strange hotel where the staff was amazing, so friendly and loving. But the food! No meat at all! I didn’t eat anything the whole time I was there. Can I please have a second breakfast?”

Then he went out to greet the new llamas, but that’s a story for next week.