Over the past eight years (and this month it’s officially eight years that I’ve been a co-owner of this property), I’ve only once seen a beaver. That was about five years ago in July, no less.  I was standing on the porch when all of sudden Moosie, then just a pup, went racing down to the Mason ditch. I watched as he walked along the ditch bank his attention on something in the water.

That brought me to the porch railing. It was a four-foot-long beaver, making his or her way lazy way upstream, grazing on the water grass that gets so thick in the warm months. For the record, I considered that scary big. So did Moosie after the beaver brought his head out of the water. As Moosie retreated, the beaver went on his way upstream.

Little did I know what that critter was really doing was scoping out my place. Two weeks later, the beaver returned to harvest a half-grown nectarine tree that I had planted along the bank the previous year.  He came back again after I planted three little Elberta Peaches near the ditch and took two and half of them, much to my frustration. I wrapped what was left of the surviving peach tree with black bird netting and it survives today, despite frequent sheep pruning. That seemed to put an end to beaver foraging along the ditch bank, but over these past years I have noticed that along the creek bank there are many small tree trunks chewed into the beaver’s signature arrow point.

I think I’ve mentioned that the creek has been moving at barely a trickle this summer. Until last week I put that up to the flood two years ago. Almost immediately after it receded, there was less water in my side of Oak Creek. The creek splits in two a few properties above me then comes back together about four properties below me. I figured the flood had redirected the water to the other side of the island.

This, I have only just this week learned, is untrue. It turns out that there’s a large and very active beaver dam above my friend Jacquie’s house. She mentioned it the other day when I complained about having so little water in the creek. She said the dam has gotten so large the creek above her is turning into a lake.

If not for her warning, I’d have been even more stunned Sunday morning when I awoke to find Moosie had a cute little plush toy in his mouth. It took me a moment or two to wake up enough to remember that Moosie never plays with toys unless its one of those massive inflatable balls you can sit on. He’s a circus dog wannabe, pushing that ball around in circles with his front paws as if he’s trying to get up on it and do an act. When he can’t, he bites the ball and watches in disappointment as it deflates. 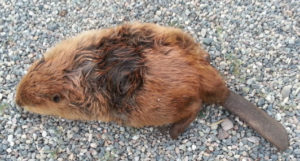 What he carries around with him are the critters he..kills!  I stared at the small, lush, brown-furred thing in his mouth. What the heck was that?

Just then he dropped it as if to show me. A baby beaver! It was less than a foot long and chubby, with tiny ears, cute little eyes, and that distinctive tail. She looked so much like a toy that I had to touch her to assure myself she was real.

Now, how in the world did a baby beaver get to where Moosie could catch her? Since he can’t get to the creek at night, there’s only one way. Just as I’ve seen Momma Otter do, Momma Beaver had taken her babies on an excursion up the Mason ditch. She was showing her little ones where to find food and building materials.

That instantly sent me to the ditch bank. My solitary peach was still there. Whew!

Then I looked back at Moosie. He was also still here, and miraculously uninjured.

I cannot imagine that this little beaver was in the ditch by herself, nor can I envision a mother beaver not challenging Moosie as he snapped up her baby. But then Moosie is so fast that he catches fish. Maybe he simply snatched the little one before Momma noticed. Or maybe it was arrogance on her part–that she trusted her size and her teeth to scare off a mere, landlubber dog. Having looked at the little beaver, I’m also certain that she was dead in an instant. Moosie’s got that neck-breaking shake down pat. My guess is that Mother Beaver also knew that, that she gathered up her surviving brood and swam for safety.

Here’s hoping she doesn’t come back loaded for Moose, as it were.  Man, even on a baby beaver those teeth are seriously big.