First, a turkey update since the black hawk just interrupted my blogging by trying to take a baby turkey. Tom’s girls laid about three dozen eggs and settled down to brood at the beginning of May. It was bad from the beginning. Rather than stay on their nests full timethe first two weeks, they got up daily to help themselves to water and nibbles. I knew from their very bad maternal behavior there was no chance I’d get many hatchlings and a good chance I wouldn’t have any. 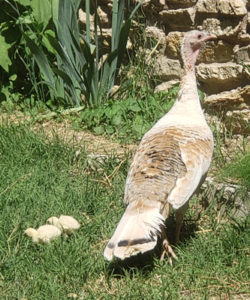 And, indeed, only five babies hatched. Considering I had expected none, this was a miracle. However, as everyone else was celebrating the adorable newborns, I predicted that most of the babies would die. That’s because Tom is nine and he’s mating with hens who are both his daughters and his granddaughters, or in the case of one hen, possibly his great-granddaughter. Last year, I had a half dozen poults die from what I suspect is an intestinal malformation.

I’m not ashamed to admit that I was a little off on that prediction. Two of the five have survived the really dangerous first week. Now all they have to do is avoid being eaten by the ravens and the black hawk. And maybe Moosie, although he’s been surprisingly good about the turkeys nesting not far from his porch. Or maybe the fact that they’re up here by the house is why he hasn’t bothered them. This isn’t his usual hunting grounds.

As for the ravens, this year I have a new and unexpected assistant in the raven-chasing business. A pair of red-winged blackbirds are nesting in the gigantic ash tree that’s across the ditch from my pond. For a point of reference, that’s about a hundred feet from where the turkeys have their nests.

The blackbirds had considered nesting on one of the small cottonwoods that have their feet in the pond but that’s where the puppies play. When I no longer saw the male hanging on the cattails, I thought they’d moved on, looking for a safer and larger body of water. Then shortly before the turkey eggs began to hatch, I watched as a raven began to swoop in toward the area where the turkeys were sitting. I grumbled and started to clap my hands, which sometimes works to drive them off. At the same time I heard the metallic cry of the male blackbird. He came streaking out of that ash tree to dive-bomb at the raven’s head. Never mind that he’s about a third of the raven’s size. Yay for brave and determined birds!

Deterring the black hawk is a different matter, since that bird personifies patience. (Can birds personify anything?) I’ve mentioned before that the black hawks have a nest across the creek from the back of my property. Their hunting strategy is to sit in one spot for so long that all their potential prey forgets they’re there. Then down they drop to snatch whatever it is they’ve had their eye on. Beware the heron who refuses to give up that fish or crawdad it just caught. Last year, one of the hawks snapped a blue heron’s neck when it noisily resisted.

Today, the hawk failed. As it dropped, Tom sounded the alarm, the dogs came running while the turkey hens flew across the ditch. As for the babies, they went to ground. One of the hens landed inside the fence around the pond, where the puppies were playing. Although I know very well that she could have held her own against the pups– ask my cats what it’s like to challenge a turkey hen; they know better– I went in and “encouraged” her (chased her until she decided she needed to fly out) to leave. Now I’m back at the computer and onto today’s belated bean planting.
When I first moved to Cornville I searched online for a planting schedule for this area. Over the decade or so that I’d spent cultivating my Scottsdale backyard until it was a year-round production organic garden supplying almost all my veggie needs, I’d learned to value knowing what to plant when. Coming to northern Arizona meant throwing away years of data since Phoenix is lower, hotter, and drier. This was actually just a brain dump, since I’d never really gotten around to writing it down. Hey, if you do something long enough, it’s rote and I’d done it long enough to end up with two-year-old, five foot tall broccoli plants that in their second year gave sprigs the size of heads of broccoli.

If you’re curious how I achieved that miracle, it was through composting the usual greens and browns (pulled plants and dried leaves) with Starbucks coffee grounds, the shredded Arizona Republic and the also shredded contents of my deceased father’s filing cabinets. He’d saved every single tax return he ever filed, from 1949 until dementia made it impossible for him to write. Occasionally, I’d add fuel to the fire by dumping on a bottle of wine that I didn’t care for.

That formula worked for my Scottsdale garden. I’ve yet to find the perfect formula for this area. I may be closer to my goal this year because the Mason Ditch folks cleaned a section of ditch beneath my house this winter. As the ditch deepened, piles of mussel-shell laden, dead-crawdad filled dirt appeared. I was practically salivating over them. Once the work was finished, I went to work. I covered one stretch of my orchard garden with paper sacks (thank you, Modesto Milling for using paper for your feed sacks!), because paper sacks, as well as cardboard, attract worms. I put ditch bottom dirt on top of the sacking and let that sit for a few months. A few weeks ago that new guy and I finally got around to buying some plants. So far the squash, eggplant, tomatoes, and peppers, plus one tomatillo, are doing well.

But I wanted green beans. I love fresh green beans. No, I love fresh Blue Lake green beans. My mother never saw a canned vegetable she didn’t like, and maybe my love for Blue Lake green beans is because that’s the brand she bought when I was growing up. But I knew from the the planting schedule I found on the internet my first year here that I was way behind schedule for planting beans. Although the schedule says you can plant beans until July 15th, my experience here has been that if they’re not in by mid-May they don’t do well.
I tried rationalizing. After all, I don’t really have time this year to garden, at least not at the level I’d like. It didn’t work. Then it happened. I went grocery shopping yesterday and there was the seed rack, calling to me. I gave it a little push to turn it. When it stopped it was with the packets of Blue Lake Green Beans facing me. I was sure it was a sign. This year’s weather has been so strange. Surely, that means there’s still time.

I bought three packages, which is two packages too many, but they were less than $2 a piece. Today, I went down to my ditch bottom garden and chose a spot between the eggplants and the tomatoes and dragged out a trough. As I dropped the beautiful white bean seeds into the trough I assured myself these beans were going to do just fine. Then in case they don’t, I also seeded in some cantaloupe, watermelon, pumpkin, marigolds and Mexican sunflowers, because…why not?

I just went back online, to see if there’s a link to that schedule I found. Much to my surprise, there’s a new and improved version from the county extension office. It arranges the info by both date and elevation, but lacks charm. In my older version of the schedule, it lists no seeds or plants to be planted during the month, but says instead: “Hot. Keep weeds pulled!” Good advice. In case you are looking for the schedule, here’s the link.

← All Grown Up
Creekside →