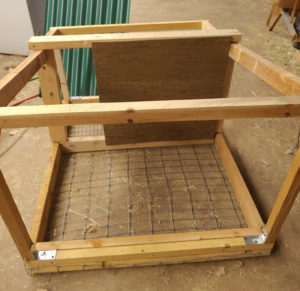 First, an update on the plans to build a rabbit tractor. I have the frame assembled! Not too shabby, considering how often I stopped, took things apart, re-measured, decided the iteration wasn’t going to work, and started over. This first one will be done in a day or so, then I’ll start the other two. It is now three feet wide and 2.5 feet tall at its tallest point. There will be an enclosed back end for a “burrow.” The others are going to be so much easier!  As for the rabbits, I’ve begun bringing them a good handful of greens every day. So far they’ve turned their noses up at cabbage, but they love mulberry leaves–even the frost-bitten ones, honeysuckle leaves, kale stems, and have begun to develop a taste for comfrey leaves, which I’m excited about. My research into raising rabbits says you can replace about half of their processed foods with comfrey leaves, and comfrey grows like a weed here on the farm.

Now, onto Radha and her best bud in the whole world, Mr. Headbutts. It’s a miracle! Radha is growing up. It’s been like someone flipping a light switch. She’s gone from impulsive overreactions to considered reactions. The other day she startled a chicken and it flew into her face. Not only did her mouth not open in response, her ears didn’t even rise. She just walked on by. She’s done the same with the turkeys, ignoring them rather than chasing. I’ll say it once again. You can train a dog that has killed chickens not to kill chickens. This is my second success doing it, and if I can do it, anyone can.

Her new calm behavior has not quite translated to how she treats the sheep. She’s much better, but given a chance, she just can’t stop herself. She has to run after them. I’ve decided this must be because Anatolian Shepherds are not just a livestock guardian breed, but also shepherds. Hence the name, duh. Clearly, Radha is herding when she puts the ewes and ewe lambs into a corner. Then, she’ll cut out the one she wants to chase, usually Milly because Milly is foolish enough to panic while everyone else holds tight to the herd.

Radha would do the same thing with the ram lambs, except for Mr. Headbutts. The minute she starts to chase the little boys, he breaks from the herd and comes dashing for her. With one swing of his head, he tags her, then turns and races away as fast as he can run. She chases him, often running wild and incredibly fast circles around him, then slows up long enough to give him another chance to headbutt her and run away.

The other day they were playing in the middle pasture. The other ram lambs went to the farthest corner, where they huddled, watching the wild running and chasing in serious disapproval. Bear mistakenly got involved when Mr. Headbutts “tagged” him. It was a PTSD moment for Bear, as he’s had a number of bad experiences with head-butting farm animals. Not only had Cinco, my previous ram, hit him a number of times, so had Dixie, one of my Jersey cows. She took great pleasure in sneaking up on Bear and swinging her massive head into him to send him tumbling. One touch from Mr. Headbutts and Bear yelped then escaped to the front pasture. 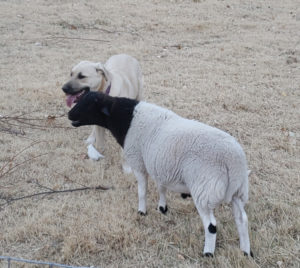 That left Radha running in circles around her best bud. Mr. Headbutts broke for the big white chicken coop, which I have adapted into a winter doghouse. He dashed up the ramp and into the big square structure. I could hear his hooves tippy-tapping on the floor.  Radha followed. Now I could hear some serious sliding and wrestling. Mr. Headbutts leapt out of the coop, ignoring the ramp, and started that ecstatic jumping that all lambs do. Radha followed. He gave another swing of his head and –Tag!– she was it again.

I love this! Not only is Radha growing up into a wonderful, well-behaved and very sweet dog, but Mr. Headbutts is making sure she is forever bonded to the very species I expect her to protect. All this because youngsters need to play, no matter their species.