Any remaining doubts I had about Tiny, my oldest ewe, being pregnant (not just fat) were answered last week. Not that I had many doubts remaining, not after her udder swelled to the size of a volleyball. That’s the big giveaway when it comes to pregnant sheep. Just days before delivering, a ewe’s udder gets so swollen that she walks like, well, like she has a volleyball tucked between her thighs. Then you wait and watch until the ewe wanders away from the flock to be by herself as she gives birth.

I had already written my blog post last week when at 2 PM on Monday Tiny disappeared from her little flock. Thinking that the day was upon us, I’d purposefully put the girls in my neighbor’s upper pasture. It’s a small space and I can see most of it from the house. All the better to keep an eye on my now middle-aged girl. The moment I realized I couldn’t see her from the porch any more, I hurried through the gate and walked the length of the area. One side of the pasture is bordered by a steep hillside that leads down to the Mason Ditch. That area is covered in wild honeysuckle and paradise trees. (For those of you who aren’t from this area, paradise trees were imported from China by the miners in Jerome; they are stinky, allelopathic, and invasive.) If Tiny was down there, I was pretty sure I was going to hurt myself getting to her, or at least end up swimming in the ditch.

When I didn’t find her on the lower hillside, I walked the pasture twice more before I found her. She’d gone up instead of down. The other side of the pasture includes an equally steep hillside that ends at a fence that borders the road. She had tucked herself between that fence and a pine tree.

By this time, Mari, Tiny’s eldest daughter was complaining from near the gate between the properties. This was very unusual. Mari, who was injured early in her life, has always been quiet and shy. It took me a moment to understand. With Tiny sequestered, Mari was next in line for the role as flock bellwether. And if Mari was going to be in charge, then goldarn it, she was going home so she could eat as many mulberries as she wanted.

Ignoring Mari, I climbed up the hill then crawled under the prickly pine boughs through a deep layer of even more prickly pine needles to sit next to Tiny. She didn’t pay any attention to me. Instead, she got up, circled once, then scratched at the ground before laying back down. That’s the sign of active labor.

Ack. If she needed help, this was the worst place for her to be. Not only was the tree in the way, but the top of the hillside is so narrow that I had one hand on the fence to keep from sliding back down. But how to move her when she’d already decided where she wanted to be?

I had no idea, but before anything else happened I was going to need soap and water. Sliding down the hill I went to the gate. The instant I opened it, Mari raced through and headed down to where the mulberries are piled so deeply that everything in the vicinity is stained a dark purple. Behind Mari were the rest of the girls. From the pine tree came an almost frantic bleat. Tiny came slip-sliding down the hill. I could see it in her eyes. As much as she liked that spot, she didn’t want to be too far from her family.

Perfect! Right beside the mulberry is the gate that leads to my neighbor’s middle pasture, a long flat stretch of grass with no pine trees but plenty of shade. Sure enough, when I opened the gate to that pasture, Tiny darted in, moving a few yards inside the fence. I drove the other girls in after her, and watched as she found herself a nice shady spot. Within an instant, she was on her side, her legs stretched out and her neck wrenched to the side as her whole body contracted in labor. A few minutes later, she did it again.

I checked her, looking for tiny little hooves, because that’s what comes first. There was nothing to see. Well, she was only fifteen minutes or so into what’s usually a thirty-five minute process. Still, after last year’s birthing debacle I was concerned. I also was determined not to interfere unless I absolutely had to.

I went to get a bucket of water and a bottle of soap and returned with them and Christina. Tiny was again on the ground, pushing with all her might.  When she returned to her feet, the water sack had finally appeared. She stood panting for a moment, then looked over her shoulder at me. “BAA!” she said forcefully, her gaze meeting mine.

This was not a plea for help, nor a cry of frustration. It was a command. Help me, dammit!

I blinked, shook my head, then said, “All right,” and soaped up my hands.

She stood perfectly still as I came up behind her. The water sack was now out and so was one of what should have been two tiny hooves. I stretched my fingers into the birth canal. Sure enough. The lamb had his/her second front leg folded, hoof tucked under its chin. I gently pushed the baby back the way it had come until I could catch the hoof with my finger. I straightened the leg and brought the hoof out to meet the other.

That was enough. Tiny contracted again. What should have pushed that baby out and onto the grass, didn’t. Instead, everything stopped again. 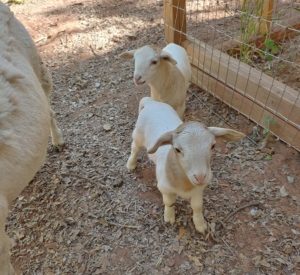 Tiny was watching me from over her shoulder. It was in her eyes. I was the answer to her problem. Clearly, she was waiting for me to solve her problem. So, once again, I gently pushed my hands into the birth canal. Aha. This was a very big baby with a very big head. Together, Tiny and I worked for a few minutes until her baby’s forehead had cleared the birth canal. Then I stepped back, Tiny gave a final push, and a little white and golden lamb with a pink nose and pink eyes dropped onto the grass.

Another albino! Now that was bad news. That pretty much said it was Tiny’s albino son who got to his mother. When and how that happened, I have no idea.

Tiny didn’t care how her lamb came into being. Giving sweet little grunts, she began cleaning her daughter. The little golden girl was on her feet in an instant. As she toddled unsteadily toward Tiny’s udder, Tiny gave a surprised grunt. Just like that, a  second albino lamb, this one much smaller and grayer, dropped to the ground. Her little boy was much more delicate than his sister.

Together, Tiny and I got the little guy’s nose cleared and waited anxiously for him to find his feet. By the time he was standing, his sister had given her first little bounce. 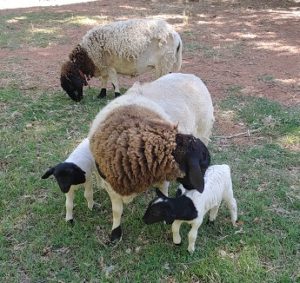 They’re a week old now and the golden girl is still dominating her brother. Three days ago, Rosie dropped two little girls without any help at all, God bless her. These are proper Dorpers, with black heads and white bodies.

It doesn’t matter that all these lambs are beautiful and healthy and strong. I can’t keep any of them for my flock, and that’s a hard lesson to take. Good breeding and good fences, along with carefully locked gates, are far more important than I ever imagined.

← Rabbit Coop Failure
Too Many Tomatoes? →