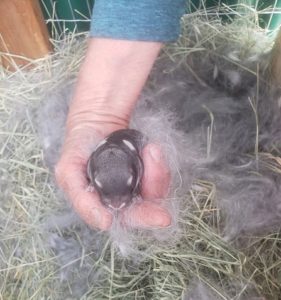 I know. An awful alliterative title but I just couldn’t resist. They are bitty and SO-O-O cute!

That’s right. My bunny girls are now bunny moms. They kindled (yes, that’s what bunny birthing is called and it’s so appropriate for me) on Thursday. Bitsy had two babies before dawn while Babs waited until Thursday night to drop her two babies.

While two babies doesn’t make for a huge litter, that Buddy produced four babies was a lifesaver for him. Literally.  I’ll hold off taking him to the guillotine until the next time his girls kindle when there better be more than two per litter.

According to my reference book, the girls can again visit Buddy in only two weeks. Think about it. Giving birth every six weeks. That is, as long as the weather doesn’t get too hot. Apparently, bucks go sterile when the temperature rises above 95 degrees. Huh, just like tomatoes, which won’t set when it’s over 95 degrees. I’m not sure what that means–that rabbits and tomatoes both go sterile at 95 degrees– but surely it must mean something.

For the moment, I’m enjoying watching the little bunnies in their furry nests. They are surprisingly vigorous. One of Bitsy’s babies wriggled itself right out to the doorway of her private area. Although I suspect she’d have taken the little one back herself, I couldn’t resist tucking the little guy into his or her furry hideyhole. It’s hard to believe that this tiny little thing is going to be ready to go–with its sibling and cousins– into its own bunny tractor in only two months. 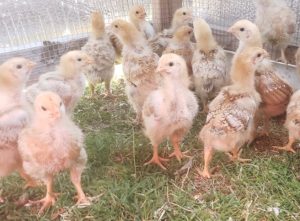 Since I’m on the subject of babies, I’m adding a picture of my Big Red chicks.  They’re only two weeks old but are rapidly adding feathers, reminding me of just how pretty a bird they are. In another few weeks it’s going to be time to open the coop door and let them do some free-ranging. IF I can open the door.

Who was the idjet who brought home a terrier? Now about knee-high,  Rupert has stopped growing. I think I’m right that he’s no Pit Bull, just a Jack Russell. As such, he should be a gopher hunter. Instead, he spends half his day crouched near the chicken tractor to watch with predator eyes as the little birds dart here and there.  He’s so persistent that the chicks stopped reacting to him.

How strange that neither he nor Radha act that way about the rabbits. As for Radha, she’s a year old and as if a switch has been flicked, she now knows her purpose. Radha keeps her eyes on the sky. She’s more than once driven off the Golden Eagle and has identified Ravens as trouble. Unfortunately, she’s also decided the same for the Blue Heron, which isn’t true, but I’m not messing with this trend right now. When she’s finished driving off the bad guys, she often returns to the nearest pen to sit beside it in “guard” position. She’s even stopped herself from chasing chickens, although it was clear just how hard she had to struggle to do it.  It was as if she was arguing with herself, “But I want to chase. No, I can’t do that any more. I have to protect! But I want to chase.”

So, here I am, enjoying a beautiful spring, filled with chicks and baby bunnies and better than good enough dogs. Must be time for Easter!