Once again, the dogs treed a cat, this time a bobcat.  I knew the bobcat was hunting this area for two reasons.  First, my artist-friend Jacquie had sent me a photo of the cat that she caught lounging near the creek after eating one of her chickens. She was surprised that it allowed her to get so close. I wasn’t. A predator near the top of the food chain is less skittish, figuring it can escape or kill you if need be.

Then, the cat came to hunt on my property.  She took two turkey hens before the dogs treed her. 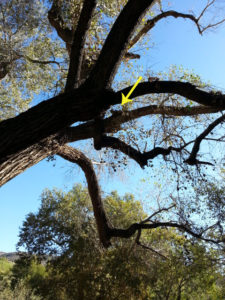 And where did the dogs tree her?  In the giant cottonwood at the back of my property.

This tree is HUGE.  It takes four people (plus a child) with arms outstretched to encircle that tree.  There’s an active honeybee hive in it, and yes I’m certain they are honeybees. The hive started out in a branch, which broke back in 2011 taking approximately 60,000 bees down with it and ultimately causing the death of my neighbor’s horse.  The beekeeper who came to kill the bees (I was sad, but I really had no choice about that) said the hive in that branch was the third largest he’d ever seen. Little did we know that what came down was only about half the hive. When the bees swarmed two years ago, the swarm was so loud I thought someone next door was using a chainsaw. I thought I took a picture of it, but (as typical for me) it seems I didn’t.  It was more than four feet long.  Well, since then the hive that produced that swarm has moved again, deep into the dying trunk after yet another branch broke off leaving a six foot tall hole. The bump in front of the cat’s nose in the picture is where that hole is. Needless to say, while I watched the trapped bobcat, I was also watching the bees buzzing around her, thinking “You really don’t want to be there, girlie.”

As near as I can figure the dogs had caught onto the bobcat by the death of hen number two. Both dogs long ago learned to decipher turkey calls and they recognize the difference between the call for sky predators, about which they can do nothing, and ground predators. Yesterday, the ground predator call rose up from the back barn and both boys were off and running.  A few moments later I heard Bear’s “I’ve got you and you’re never coming down” bark. 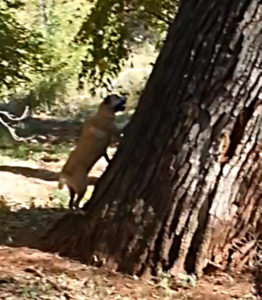 Down I went to see what they had. By the time I reached the dogs Bear was moaning and barking as he circled the tree.  Not Moosie.  He was flat out trying to climb it.  He would get about four feet up the side before falling back to the ground.  Each time he hit the ground, I could see he was holding up his right paw.

It took me a minute to find the cat.  Unlike the mountain lion who was Moosie-sized if you didn’t count her tail, this little critter was about forty pounds.  Given that, she (I’m not really certain she was a she, but I choose to believe she was) and I were both certain that if she came down to face the dogs, she was going to die. Yes, my dogs might be injured, but she would certainly be dead, dead, dead.

As I watched, she tried making her way to the far end of the branch, which stretches across the ditch, making contact with a large walnut on the opposite bank.  But cottonwoods are tricky things. I’m sure she could feel the thinner branches creaking and snapping even under her slight weight as she reached the little stuff. So she came back to the fork, found the bees and backed off again.  Then the piggy girls came down to see what we were doing. I’m not sure if the cat knew the difference between the dogs and the pigs, but I’m pretty sure she recognized the pigs as “bigger than me and I really need to get out of here.”

That’s when I realized I needed to get her out of that tree without 1) the dogs killing her and being hurt in the process, especially with Moosie already on the injured list and 2) me pulling my dogs in only to have her come down and take a turkey on her way to safety  Can’t shoot a bobcat without some kind of license, not that I’m necessarily capable of shooting well enough to hit a small cat sixty feet over my head.

I plumbed the Web and discovered there was no help available, so I called the vet’s office to let them know I’d be bringing Moosie by later. By the time I’d done that, I returned outside to find the dogs on the porch. Moosie was trembling and almost unable to walk. I locked him inside–because he’s a dog and a dog wants to go with you even if it means agony–and went down to check the tree.  Sure enough, the cat was gone. Then I counted my few remaining turkeys. They were still with me.

Here’s hoping she’s made the same decision that the mountain lion did and marked this property as not a good choice even with all the food that roams it. As for Moosie, the vet says he strained/sprained/tore/overused his shoulder muscles trying to climb that tree.

That means he’s on the injured list for a week, and that means I’m facing another “week from hell” as I try to keep him from racing off to confront some other critter.  He’s already gotten away from me once this morning. He’s pretty darn fast even with only three working legs. Sigh.