Yes, the little gilts have names now, thanks to my friend Ken Sanchez.  The bolder of the two is Boinker (bold oinker) while the shy girl is just Oinker.  Of the two, I can see that Oinker has the sweeter nature even though she hangs back and isn’t willing to let me touch her…yet.   I love the way they both make eye contact and want to connect verbally.  Both of them have already established that I’m the “food-delivery system”.  That makes me their favorite non-pig.

So, what have I learned thus far?  That too much stimulation isn’t any better for shoats than it is for toddlers, so keep the visitors to a minimum. Boinker was getting a little aggressive after this weekend.  My brother-in-law Courtney came up with his daughter Hannah and one of Hannah’s friends.  They left midday just as Ken and my writing pal Holly Thompson appeared.  Boinker was definitely thinking about nibbling at toes by then.  It turned out that Moosie’s toes were first on the list.  Much to his credit, Moosie exited from the orchard without so much as a blink of a reaction at this.  That was huge, considering that he had had them pegged as “prey” when they first arrived.

That both girls are fascinated with Bear’s fur.  Why, oh why, can I not be like the rest of the modern world and carry my cell phone with me?  (When I went to wake up Hannah and her friend Saturday morning, both girls were sound asleep with their hands curled around their phones.  Both brought their phones to their faces as they stirred.)  Bear went into the enclosure and laid down beneath the apple tree.  Both shoats went dashing over to him.  Boinker crawled along his back, snuffling in his fur, then climbed onto his side and stood there for an instant before sliding down between his paws where she started nibbling at his toes. That stirred the big dog into half-raising his head.

That little piggies really love taking naps.  I was worried the first few days when they both disappeared around eleven.  Then, the grass was still tall enough that I couldn’t see them nestled in their shady rolling coop.  The arched roof that covers the back two-thirds of it is just high enough to catch the breeze and, because it stays dark in there, I suspect the grass remains cool and moist all day long.  Then on the third day I caught Boinker snoring.  Mystery solved. 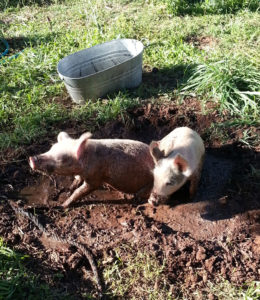 That it doesn’t matter how many tubs of water you give them, they’ll get into all of them for a quick dip, then roll in the mud they made after their first dip, only to go back and deposit said mud into their drinking water.

That an electrically charged line set at 12-18 inches absolutely keeps the two of them where I want them. I think they may have been familiar with that setup before they arrived, because they were very hesitant to get close to it when I first installed it.  This morning, Boinker decided to try it with her nose and shot backward, squealing at the top of her impressive lungs.  Boinker has a lot to say for herself.  Poor Oinker accidentally backed into the line and gave a choked cry that for all the world sounded like “Yike!”

On the other hand, electric strand fencing has not proved effective for containing the sheep even though I ran three strands to almost 3 feet in height.  Wool appears to be an insulator.  That said, both of the sheep did touch their noses to the lines the other day.  For the next four hours (which may be the limit of their memory) they avoided the lines and stayed where I wanted them.  After that, they disappeared from their bit of pasture.  I suspect they were grazing and, with their heads down, reached through the fence without connecting soft tissue to the line.  Because there was no zap, they just kept going.  Toby and Tiny seem to have bonded with the turkeys, because each time they’ve escaped, they’ve gone back to spend time with the birds.

Other things worthy of note…both sheep and shoats love the bind weed!  It’s their first choice for nibbling.  After that, the shoats will move on to the plantain while the sheep go for the lambsquarters (imagine that!)  All of them ignore the heavier, dense grasses and, thus far, the nightshade and the Italian Endive that I planted–no, not planted; I simply tossed out seeds–two years ago. Can’t say I blame them.  The nightshade is thorny and the Endive is very, very bitter, like Chicory.  It’s also incredibly persistent and is outperforming the nightshade.  Since I’ve been told that hogs will eat the nightshade, I’m hopeful that they might also come to enjoy the Endive as well.  The sheep like peaches, apricots, pluots and apples, especially if they’re a little soft.  So far, the shoats have turned up their snouts to the fruit.  I think this may be because they’re still taste-testing what’s being offered to them from the ground.

And, much to my neighbor’s astonishment, the little girls really do graze.  Although she’d been around hogs more than once in her lifetime, those pigs had always been kept in sties and fed table scraps and hay.  She didn’t believe me when I said I would put them in the pasture and they would eat grass.

As for feeding them, I started them on pig chow at the rate my book suggested for their age only to have huge wastage (well, not really, since I gave their leftover food to the turkeys…but if I hadn’t had turkeys, their discards would have gone into the compost).  I’ve since cut the amount in half and still had wastage.  Today, I gave them half of that half for breakfast and saved the second half for dinner.  If there’s leftovers again tomorrow, I’m cutting the amount back one more time.  This means they really are satisfying themselves on the grass!

So all in all, I think I can say my first week as the owner of these two gilts has been a roaring success.  More importantly, funny things are once again happening on the farm.  At last!

2 Responses to Boinker and Oinker