Toby, my Dorper sheep (technically a wether, or castrated male) went the way of the Thanksgiving turkeys unexpectedly this Saturday.  Unexpectedly, not because slaughtering him hadn’t been on my to-do list, but because I guess I hadn’t truly convinced myself that I was really going to do the dirty deed.

I may not have convinced myself, but I had apparently set the intention.  You don’t fool with intentions.  Nor do you forget that speaking an intention is as powerful as setting one. That’s what I did when when I began to ask around after someone willing to teach me how to slaughter Toby.

Funny how many local small farmers and homesteader-types I’ve met since I moved up here to farm six years ago. Or maybe not.  Those who have the same passion I do about nurturing life from the soil, whether through produce or livestock, are hungry to connect to others inflicted with the same insanity.  What we’re most hungry for, though, is the knowledge we don’t have and needed to know YESTERDAY.

Although a number of the folks in my new tribe suggested a local butcher, that wasn’t really what I wanted. I’m not sure how it happened but I’m haunted by a strange sense of responsibility for the animals I raise.  I feel that if I intend to eat them, then I need to be the one who takes their lives.  It’s not a path for everyone, nor do I expect it to be, but it is my path.

That said, I wasn’t as committed to butchering the animal after the fact. It was a case of knowing exactly what I didn’t know.  I’ve cut up two-legged critters for forty years because it’s cheaper to buy a whole chicken and cut it into pieces.  But, until yesterday, I knew exactly nothing about cutting up four-legged critters.

Despite my uncertainty, I almost instantly made the right connection (thereby forcing the issue–see above about setting intentions).  Of course, it turned out I already knew the person recommended to me.  I’d met Deidre a few years ago when I was still milking.  Come to find out, she not only keeps goats but slaughters when necessary.

Still, I didn’t make the call right away.  Like the turkeys, a sheep carcass needs to hang before being turned into meat, up to five days it turns out. Hanging the meat wasn’t the issue.  Sam Frey, the guy who used to own this house, had installed a hoist in the barn, no doubt to remove car engines. What I needed was for my barn to become a giant refrigerator and that requires the one thing that wasn’t happening: cold weather. Seriously?!  How could it still be over 60 degrees on Thanksgiving?

The day the temperature didn’t go above 45 was the day I made the call.  Deidre and I played phone tag (a result of my refusal to carry my cell phone with me at all times) for a while, then connected last Saturday, which, of course, was a balmy 60 degrees.  Certain the “heat wave” would break by mid-week, we set the date for this coming Thursday and hung up.

About 10 minutes later, Deidre called back. “What about today?  I’m off and have the time.  The weather’s a little warm, but it will cold enough tonight for the carcass.”

I drew a quick breath in trepidation.  Here it was–push come to shove.  Was I really committed to this?  Could I really kill something that I’d named and whose chin I’d scratched?  Well, I sure couldn’t just keep him as a pet.

“Okay,” I said before I could change my mind.

Since she lives just down the road, she was here in a few minutes.  We lured Toby into the orchard with “the bucket”. It doesn’t matter if the bucket is empty–once seen, it’s a magnet that draws every animal on the farm.  From there, we used the dog leashes to bring him into the barn.

Warning: graphic description follows.  If you’re someone who believes your meat grows from seeds placed on styrofoam platters in the back of the supermarket butcher shop, skip this part.

Butcher n. 1 a person who slaughters or dresses meat.

Oddly enough, neither of us were comfortable with the idea of shooting him.  Deidre said that the last few goats she and her husband had tried to shoot hadn’t died as expected and the result had been spiritually taxing.  As for me, despite my recent success with the .22, I have no confidence that I can actually hit anything even at point blank range.  That left us with no option but the one we were both most comfortable with–the biblical way; Deidre slit his throat.

Death is a taboo in our culture and that’s a terrible shame.  After all, death is the one thing that every one of us is guaranteed to experience and turning away from it doesn’t change that fact.

Once Toby was gone, we raised him on the hoist using Deidre’s gambrel.  I was surprised at how little time it took to remove his pelt.  Okay, not as fast as my plucker, but no longer than 10 minutes.  I wasn’t quite as surprised as Deidre by the amount of fat we removed from him.   That’s because last week I discovered that the sheep had been tag teaming my piggies–two to distract while one dodged in to grab bites of pig food,  I think they were getting more pig food than the pigs.  I’m still rendering fat today. Lamb fat makes really great fried potatoes, by the way.

Then it was time to remove his innards.  Again, I was surprised by how easy it was.  Yes, turkeys are smaller, but in this case bigger is easier.  After cutting him open, we gently guided his insides into a big metal garbage can, saving his heart for the dogs, his lungs for the pigs and the liver for me.   His kidneys were lost in the fat; I found them later.

That was pretty much it.  I thanked Deidre, who didn’t want to be paid but will get Toby’s neck as it’s her husband’s favorite piece.  Toby’s head, pelt and innards are presently buried under a deep layer of rotting wood and compost that will play host to new fruit trees next year.  Meanwhile, I wrapped his carcass in cheesecloth and left it hanging in the barn, which (thank you God!) maintained a temperature of about 42 degrees…

Butcher n. 2 a person who mangles, ruins or bungles something.

…until I noticed the weather report Monday morning.  WHAT?!! No way could it actually reach 65 degrees on the afternoon of December 5th! So much for my cool barn.

That left me no choice.  Ready or not, I was going to have to make meat out of that carcass immediately.  A while back a friend gave me a book about slaughtering and butchering livestock and game.  Armed with that, I brought the carcass up to the commercial kitchen.  Deidre’s husband had suggested a sawsall for cutting through bones, so I added that to my knife selection.  With my eyes on the illustrations in the book, I started cutting while my renter Derek ran to the store to buy what I called butcher’s paper and is actually called “freezer” paper (sorry, Derek) as well as vacuum seal bags.  I ended up opting for the vacuum bags. 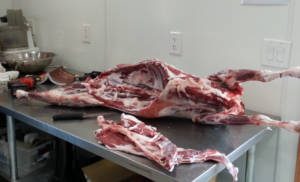 Oh, I so wasn’t ready. First, although I’ve eaten lamb over the years, the only parts I’ve chosen have been shoulder chops, lamb chops and de-boned leg of lamb.  I knew where those where, but what the heck is the rest of this stuff and what do I do with it?  I so needed someone who could name the parts, touch the carcass exactly where I needed to cut and tell me what to do with it after I’d cut it off.

No, what I really needed was a butcher’s saw.  The sawsall just didn’t cut it (sorry, couldn’t resist), most likely because of operator failure.

About an hour into the chore, I gave up on the book and went to Youtube.  What I found was a Brit butcher who took apart a whole lamb carcass in 30 minutes.  Yeah, right.  It took me almost 8 hours to accomplish the same thing.  Along the way I think I mangled as much as I cut.  I took heart from the Brit, who assured me that I could use the mashed bits for curries and lamb stew or even grind it for Shepherd’s Pie.  For the record, Shepherd’s Pie is made with lamb while Cottage Pie is made with ground beef.

Around 3:30, just before it was time to put critters to bed, I had finished everything except for a chunk of almost meatless rib bones still attached to the spine.  I looked at the sawsall and knew I couldn’t wrap my now-aching hand around it one more time.  That left one option: Bone Broth!

With no time to fuss, I threw the whole thing into the crockpot at high to brown the bones a little, then added a half gallon of water and the half an onion I’d left on the cutting board from lunch.  No salt, no pepper, no greens, just half an onion and water. Two hours later, the critters were locked away, the commercial kitchen was clean and I was starving.  By then, the smell of cooking lamb had filled the house.  Curious, I opened the crockpot and cut off a bit of the thin, fatty meat that clung to a bone.

OH MY GOSH!  I swear, it was the most amazing thing I’ve ever eaten!  For the next ten minutes I stood over the crockpot scavenging every last morsel from those bones.  That made all my work, however poorly done, worth it.  My goal had been that no scrap of Toby would be wasted, whether as compost, dog food and bones, meaty fat for the pigs or something I would eat.

Before too long, I’m going to have to do it all again when the time comes to take one of my porcine girls.  I’ll be ready by then.  I’m already studying the Brit’s video in which he does half a hog in twenty minutes.  Hmm, I should be able to handle it in about 6 hours  for sure.

But before I do that, I’m buying a butcher’s saw.