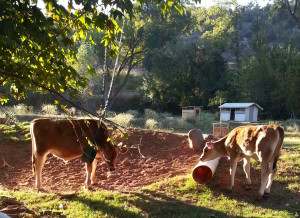 Little Hannah Mae is doing very well and growing like a weed (and now taking almost all of her mother’s milk–no cheese for me!).  I’ve learned some interesting things about a heifer over these past weeks.  For instance, the little girl cows don’t really liked being touched.  Until now, I’ve only known little bull calves.  Like Georgie, they’ve all been bold in their curiosity and quick to attach themselves to the human willing to give them a pat and a scratch. I guess this makes sense.  If they were wild, the bulls would all need to be aggressive in checking out the situation in case there was danger while the cows would back into a circle, waiting to see if the coast is clear.

Knowing that I will someday want to milk Hannah, I’ve been making sure I give her some pats and scratches every day.  It is NOT her favorite thing.  Walking slowly, I maneuver her around the corral until she’s cornered, then start with the horrid routine of rubbing her face, scratching her neck and ears, under the chin (she’s sort of fond of that) and then rub her tiny little teats.  The whole time she’s tense and her eyes are scrunched almost shut.  This morning I had a break-through because she simply backed into the corral fence and let me do it.  I could see it in her eyes: “Whatever, let’s just get this over with!”  Meanwhile, Georgie is following me around like a dog, to see if I have any pats and scratches for him.

But beyond that ordeal, she’s liking her life here.  After all, there is a big brother to chase and torment.  I watched them on the hillside last night.  She so tiny and light that she practically flitted up the rocky slope then danced like a mountain goat from outcropping to outcropping. Georgie was following her along the lower path, running for all he’s worth.  As they met, he half-kicked at her as she passed.  It was such a “boy” thing to do:  “Ha!  I could have gotten you if I wanted to.”

Yesterday, my relief milker came with his two children, who are 4ish and 2ish.  Hannah was fascinated.  She kept getting closer and closer to them, watching their every move.  I could see what she was thinking in her eyes:  “They’re just little like me!  Maybe we can play.”

Think I’m wrong about that?  Then you haven’t watched one of my four-legged babies play.  Dog or cow, they recognize a toy or a playmate when they see one.  The swing is a favorite.  Every calf that’s lived here long enough to discover it has developed his own game with it.  If you headbutt it just right, it’ll go swinging and twisting and hit your buddy in the back.  That’s the best fun!

So yesterday, I caught Georgie ‘splaining the rules of swings to Hannah.  She was unconvinced at that moment, but later when I got in it and started swinging, she actually came close to watch me.  It won’t be long before she’s dashing beneath it and sending it flailing at an unsuspecting Georgie.  I can see it in her eyes!