I apologize for the late post. For the past eight weeks I’ve been struggling with what the podiatrist (yes, I went to see a doctor; unbelievable, I know) diagnosed as a strained ligament. She also told me that I would take months to heal. In the meantime, it hurts to walk, even though I’m braced and salved and am wearing real shoes. According to my farm assistant’s pedometer, we figure I walk anywhere from 7 to 15 miles a day. By the end of the day, which, on Mondays, is when I usually sit down to write my post, I’m toast. So, until this thing heals, I’ve given myself permission to be sloppy about when my weekly story gets done. 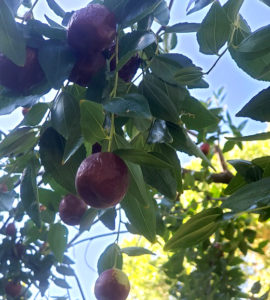 For all of you that have never heard of jujubes –not those sticky, overly sweet candies, but the actual fruit– they are more often referred to here in the US as Chinese dates. They’re low in calories and high in fiber and Vitamin C. They are a tiny apple-like fruit that starts out pale green, then darkens to a pretty reddish-brown. They’re ripe when they’ve lost about half their size and turned into a wrinkled little thing that sort of looks like a date. By that time the interior of the fruit has become soft and sticky-sweet. That’s when most people eat them, but not me, or my neighbor Elena, or Christina, my right-hand woman. We like them when they’re still crisp, half-green, half-brown. To us, they taste like caramel apples. Others have described them as being dry, not sweet enough, or like eating Styrofoam.

That so few others like them is just fine with me, since it means more fruit for those of us who do love them. And what’s not to love? They’re low in calories and high in Vitamin C and fiber. That’s a good thing since this time of year I stop and pick a couple–or three or four– fruit about ten times a day. If my sheep had their way, they’d pick the tree clean. Rupert likes them, but he likes everything. My chickens also like them, and so do all the wild birds. I was watching a Scarlet Tanager pick a tiny hole in each of a dozen fruit yesterday. Maybe he only likes the wrinkled ones.

Surprisingly, (or maybe not, since I still know relatively nothing about rabbits) my rabbits like them. Generally, Buddy, Babs, and Bitsy are pretty picky about what they eat. Arugula, turnips, radishes, no. Lettuce, honeysuckle, apple branches and leaves, yes. Their absolute favorite are branches from the tree that grew out of plum root stock. I actually encouraged this on purpose. I wanted a tree on the ditch bank that I didn’t care about, one that would hopefully distract the beaver that stole my nectarine and ate two of the three Elberta peaches I’d planted there. So I transplanted this little treelet, and it’s done great, maybe because the beaver’s moved on. The tree is now a good eight feet tall and, except for this year, has borne dozens of tiny sweet yellow and pink plums Apparently its bark and leaves taste as sweet to the bunnies as the fruit does to me. And to the sheep, but then sheep aren’t particularly discerning. After all, they’ll eat radish greens.

Since I was sharing the jujubes with all my other critters, I thought I’d let the rabbits try them. I dropped a fruit into all three of their homes. Bitsy sniffed at hers, then hopped back into her hideyhole. She apparently waited until I was gone to eat hers.  Buddy ignored his first few completely, far preferring his plum tree branch but now the fruit disappears by morning.

But Babs! She rolled hers around with her nose, then took a bite. Her eyes widened then she was nibbling like crazy. It’s weeks later and she now studies my hands when I open the top of her home, looking for her treat. I drop the fruit and she almost pounces on it. It’s gone in a flash.

Both she and I are going to miss our daily bit of sweet Styrofoam when the season is done. Next year will be even better. My five smaller jujubes are finally big enough to bear fruit!

The turkey came home to roost for Radha today and she most definitely earned it. As you may recall, I’ve been battling for months to get my hard-headed, dominant and determined, 1.5 year old Anatolian Shepherd to show me she can become some sort of livestock guardian dog (otherwise referred to as an LGD). Over… END_OF_DOCUMENT_TOKEN_TO_BE_REPLACED

The title of this post was supposed to be “An Ode to Cukes.” I actually considered writing an ode, but after some research on the format, which I vaguely remembered from high school English class, I decided I would only embarrass myself if I tried. Instead, I’m inserting a picture of Radha here, because…well, because… END_OF_DOCUMENT_TOKEN_TO_BE_REPLACED

Yeah, not that kind of edgy. Edge-y. As in sharpening knifes because last Saturday I had no sharp knives. None. Nada. Nil. It was that day that my friend Mike brought fourteen Buff Orpington roosters by to turn into food. I can hear all of you who know what a Buff Orpington is groaning at… END_OF_DOCUMENT_TOKEN_TO_BE_REPLACED

It’s still 64 degrees outside as I write this and even though I know the temperatures will be back near 100 degrees later in the week. Although it is still, albeit just barely, August it feels like Fall today. I know that later this week we’ll be back to almost 100 degrees, right now the… END_OF_DOCUMENT_TOKEN_TO_BE_REPLACED

Did you know a dog can be a hypochondriac? I didn’t. At least, I didn’t until last week. Okay, in all fairness to Rupert, he is a vaccine-injured dog. (He actually has an exemption from having vaccines until he’s 18 months old.) It’s entirely possible that the vaccine that temporarily paralyzed him also left his… END_OF_DOCUMENT_TOKEN_TO_BE_REPLACED

What happened to our Monsoon season? One storm that drops only enough water to dirty the truck is not going to cut it! I need my rain because, other than my ancient flood irrigation system that I keep patching up, I don’t have any way to satisfactorily water anything anywhere on the farm. What a… END_OF_DOCUMENT_TOKEN_TO_BE_REPLACED

Here we are again, starting into the dog days of August, and boy, oh boy has it been hot here. We had two days–maybe three; I can’t remember because the heat addles my brain–over 105 degrees. That’s really unusual for us, and it’s made worse by the very thing that usually makes this place livable:… END_OF_DOCUMENT_TOKEN_TO_BE_REPLACED

So Bear gave me a scare last week. It was my fault because somehow I managed to leave two creekside gates open overnight. I swear the heat pickles my brain, but I’m unwilling to give up garden time just because it’s 104 degrees. At any rate, the gates were open overnight and, to the best… END_OF_DOCUMENT_TOKEN_TO_BE_REPLACED

I know this will be hard to believe, but the impossible has happened. I have run out of baling twine to use for my building projects. Oh, the horror! What can I say? Every animal I own is grazing on pasture at the moment, so I’m not buying any hay. That may change in the… END_OF_DOCUMENT_TOKEN_TO_BE_REPLACED