Because I love to cook

Now here’s a title that ten years ago I would never have dreamed I’d use. To explain why I have to go into my genetics. You see, my maternal line comes out of Norway. In fact, although my maternal grandparents were born in the US, both of them spoke Norwegian as their first language. My grandmother wasn’t exposed to English until she left school after the 8th grade. (Her “yelly” definitely “yiggled.”) Even more importantly, the area in Norway from which my maternal line springs is the northernmost area of Scandinavia. One of my mother’s cousins has spent years researching our history and she believes we’re actually Laplanders.

This history, and the culture that comes with it, was far more influential in my upbringing than my more muddled paternal side, which consisted of Polish, Bavarian, and French Canadian ancestors. As with anyone, with the history comes food. Fans of Garrison Keillor may recall his many references to Scandinavian food as “carrier food,” meant to carry butter, sugar, or salt to the gullet. I can testify that this was the sort of cooking that went on in my mother’s kitchen. Worse, my father suffered from ulcers, which were then thought to be caused by eating food that was too spicy. So bland, white, carrier food is what I grew up on. The only peppers we had were green bell peppers. Vegetables didn’t stray too far from carrots, celery, canned corn, canned peas, and canned green beans, and lots and lots of mashed potatoes. Not much fish, though, but that may have had more to do with my mother growing up in a landlocked area of Wisconsin. Although, she was fond of peanut butter and sardines on crackers. Neither I nor my siblings could be convinced that this was delicious. My grandmother did her best to convince us of the same thing with Lutefisk, with the same result.

All of this is a long way of saying that until two years ago, I’d never so much as seen black-eyed peas much less considered eating them. As for collard greens, while I’d definitely heard of them, I had no idea what they were. I’d had cabbage, of course. I think cabbage has its own level in the carrier food group pyramid; shredded cabbage soaked in well-sugared mayonnaise is what passed for cole slaw in my grandmother’s house. I started growing chard when I first moved up, but frankly it took me a few years to actually eat it myself. Then I wondered why I’d waited so long. Apparently, chard is just another name for “spinach.” Now, I use chard in everything.

Given that experience, I now wonder why it took me so long to look at other foreign foods, black-eyed peas being a case in point. I bought my first bag of dried peas about a year and a half ago. I wanted black beans, which until then had been my staple bean for soups, chilis and even refried beans, but my local grocery store was sold out. Feeling reckless, I scanned the many different varieties of beans, and my gaze fell on the black-eye peas. The label promised ease of cooking, so I took them home only to discover that my new partner not only knew what they were but had eaten them often. With no excuses left, I cooked up my first pot and discovered they have a wonderful nutty taste. 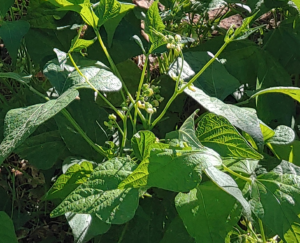 After that it was just a matter of coming up with dishes that used them. My favorite recipe book–the internet–offered up an Indian-flavored dish including turmeric and ginger, which I immediately bastardized by adding spicy Andouille sausage.  Everyone liked that well enough that the dish now makes a regular appearance on my table, and I was such a fan I knew I had to add the peas to my garden. I discovered by chance that I could use store-bought peas as seeds, when a pan of soaked  and drained peas ended up in the refrigerator for a couple of days. When I pulled them out, I had a whole pot of lovely pea sprouts.

So I took a good handful of peas out to the garden and put them into the ground and was stunned at how attractive a plant they are. Their blooms look like any pea blossom but they start out a pale waxy yellow and lighten into pure white. I’ve already decided these plants are going to show up even my rose gardens. They’ll make a great border plant. Pretty, tough, and fruitful, and unbelievable easy to grow. Drop a pea and a plant shows up. It doesn’t get better than that. 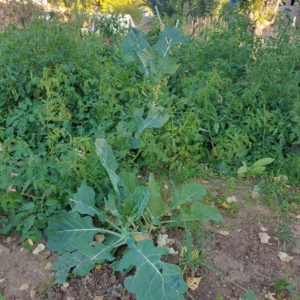 As for collard greens, well, I picked up a six pack at the local garden nursery in early spring and planted them with my yellow squash. They started out looking pretty healthy, then between the hot dry summer and cabbage loopers weakened so much I  considered pulling them. But every time I’d reach for them I’d see that they’d added a new leaf or become a little greener. After I replaced the dying squash plants with tomatoes, the collards immediately perked up. Maybe they don’t do well with squash?

Because I wasn’t expecting anything of them, I ignored them until I started planting a row of nasturtiums just beneath their bed. To my surprise the weak little plants had become three feet tall and were sporting large, very healthy looking leaves. Of course, I had to pick some leaves but I had no idea how to fix collard greens and I’d been told they were really tough. Everyone I spoke to agreed they were tough and that a pressure cooker was needed. Since I was already using the Insta-pot to cook the black-eyed peas, two weeks ago I took the plunge. I added a few slivered leaves to the peas in the Insta-pot.

And now I know why people eat them together. All I can say is that there’s something about that combination that just makes my stomach happy.

For what it’s worth, here’s my Way-Northern European take on Black-eyed Peas and Collard Greens.

Soak the peas for at least a few hours (up to 8) in 6 cups of water plus a 1/2 tablespoon of salt. Drain and rinse, then put peas in the Insta-pot. Add enough water or chicken broth to cover, bay leaf, salt, onion and collard greens. Use the “Manual” setting on the pot and set to cook for 20 minutes. While the pot does its magic, put the olive oil in a big saute pan over medium heat. Add the sausages, garlic, onions, turmeric and ginger and cook 5 minutes until onions soften. Add the peppers, and tomatoes.Season with salt and pepper. Cook another 5 minutes.  If it becomes too dry, you can add chicken broth or water, but it’s better to wait until the peas and greens are done, and use the water from them as part of the dish.

I don’t wait for the Insta-pot to count down and vent slowly. The minute the timer runs out, I vent the pot and remove the peas and greens, and add them to the pan. If you’ve guessed right, there’ll be just enough water left with the peas to loosen up your sausage mixture. Mix well, add the cilantro, and serve.

I was going to write about Rupert, who has become a swimming dog now that the temperatures have climbed into the 90s. He slides into the ditch and lets the current float him downstream for a bit, then paddles like heck, gets out and rolls in the grass…and, of course, then runs in joyful, cool,… END_OF_DOCUMENT_TOKEN_TO_BE_REPLACED

These days I make a lot of dog food. I guess that’s what happens when you have four dogs and are committed to feeding them unprocessed raw food, otherwise known as the BARF (bones and raw food) diet. Why would I go to all the trouble of such an inconvenience when there are hundreds of… END_OF_DOCUMENT_TOKEN_TO_BE_REPLACED

First, I would so like to report that I have a new calf. I can’t.  Although June is getting more serious about letting that baby go, she continues to bide her time. Obviously, her previous owner was incorrect about her due date. She may also have been incorrect about the Holstein bull being the father,… END_OF_DOCUMENT_TOKEN_TO_BE_REPLACED

It’s only been a few years since I last had dairy cows on the property, but in that short time I completely forgot how awful the flies are.  However, before I get into discussing the pestilence of flies, I need to get you caught up on general cow news. Who knew how annoying it was… END_OF_DOCUMENT_TOKEN_TO_BE_REPLACED

I wasn’t a helicopter parent with my kids, and I’m not a helicopter farmer when it comes to my animals. I’d rather watch and wait to treat something until I’m sure the animal can’t handle it on her own rather than dose proactively. A couple of weeks ago the moment for treating arrived for Tiny,… END_OF_DOCUMENT_TOKEN_TO_BE_REPLACED

Before I throw myself into this week’s post, I have to kvetch over the recent full moon. I know everyone was going on about it being this blue-blood-full-eclipse moon, but why didn’t someone warn me what that meant? Here I was, figuring this was a full moon like all the other full moons I suffer… END_OF_DOCUMENT_TOKEN_TO_BE_REPLACED

Nothing really funny has happened on the farm since the pigs became pork.  This is very frustrating for me. I mean, the high point of my day has been walking out during my breaks and observing the hi-jinks that always seemed to occur while I’m outside. Sigh. Not that I have a lot of time… END_OF_DOCUMENT_TOKEN_TO_BE_REPLACED

November.  That is not a month most folks connect with tomatoes ripening on the vine.  I sure wouldn’t have, but there seems to be a lovely little miracle occurring in my new hugelkulture garden. If you recall, back in July I planted San Marzano tomatoes as a reward to myself.  All those months ago I… END_OF_DOCUMENT_TOKEN_TO_BE_REPLACED

So before I throw myself into another recipe, I need to make a porcine update.  The day when I have one piggy instead of two is drawing rapidly closer, but I really thought I was going be short a pig two days ago. That morning I was drawn to the door by a strange squeaking… END_OF_DOCUMENT_TOKEN_TO_BE_REPLACED