Once again I choose a title that doesn’t reflect the total lack of lambs in my life.  OMG!  She’s driving me crazy!  Now that I’ve vented, I’ll tell the story the way I think it should be told.

First, this is what I wrote in my 2016 day planner for September 25th:  “Cinco is finally tall enough to reach her.  Tiny pregnant?” This is followed by several observations in early October that Cinco had tried to mount Tiny and was rejected.  I remember thinking then that she must have taken in late September.  Now, if it’s true that she took in or around the end of September (and let me say the term “hysterical pregnancy” has been bandied about lately), then she should produce lambs on February 25th…which just happens to be Day One of my vacation. Sigh.  Best laid plans and all that.

So why was I so convinced that she was delivering in January?  Because she was giving me all those “signs your sheep is about to deliver.”   That had me thinking that maybe Cinco HAD been able to reach her before I thought he was tall enough to do the deed. Sometimes the internet is a curse rather than a blessing.  And she does appear hugely pregnant.  The possibility of triplets, should this be a real pregnancy, looms.

Or maybe the lambs didn’t make it.  Maybe she’s resorbing them and there won’t be any lambs at all.

Whatever.  I’m ready to move on. And in that vein, I’m moving on to describe in more detail than last week this marvelous new chick coop I (sort of) built. 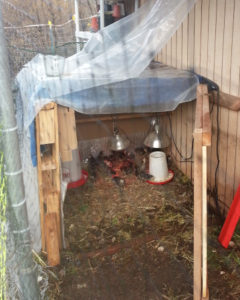 As you can see from the picture and if you read last week’s post, you know this is a true work of…um…bubblegum construction, from the pallets lined with padded aluminum insulation and cardboard, topped that with a tarp and greenhouse plastic.  Nonetheless, the baby girls love their new home and the chicken run that gives them safe access to the outdoors and the sunlight, something seriously lacking in their bathtub in the barn.

In case you missed last week’s post, the metal uprights that surround this new chick area were already in place, part of an early greenhouse system that turned out to be too hot to use even in the coldest months.  Why? Because that side of the barn faces due south and the trees don’t have leaves in the winter.  I’ve covered the uprights with shade cloth and grown lettuce there in July, though.  Now, I needed to find a way to keep my new babies safe from predators–both wild and domestic.  Moosie’s been eyeing them as the tasty little morsels they are.

That took me back behind the barn where I stash fencing I’ve used and reused a few dozen times.  I had just enough metal chicken wire to cover the lower half of their run.  That was perfect because I knew exactly what I wanted for the upper half: black bird netting.  That’ll stop just about any animal, even humans.  Even ravens and, believe me, they stop at nothing if there’s a chick or an egg to be had.  The stuff feels like spiderwebs and catches on every little edge.  Very creepy.

I covered the place where the two fabrics meet with plastic chicken “wire”.  I have tons of that stuff. I use it when I start seeds in a garden. After I plant, I lay this plastic fabric out over the soil to keep the cats from digging into what I’ve spent hours carefully turning, raking and planting.  As the seedlings grow I either remove the plastic mesh or cut into the open circles to accommodate the burgeoning stems. 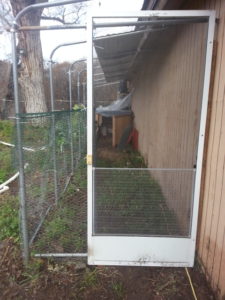 After the coop was enclosed, I needed a door.  That meant a quick trip to Restore.  I came back with a screen door that I rehinged and mounted all by myself.  (Good girl!)  That left only one thing to complete the job: the door to the coop.  I tried a couple of things and didn’t like either of them.  Then, two nights ago, I remembered that I had leftover snap-together knotty pine boards that had been used as a ceiling in one area of the house.  That was it.  I had my door.  Or rather, I had the idea and just the guy I needed to help that idea become reality.  Thank you, Derek!

He quickly assembled a box made from wood I rescued from a previous coop.  Together, we snapped together the plastic-coated knotty pine pieces and screwed them in place. Then, we traded off screwing in the hinges while the rain poured down our backs. That was okay as it gave me a chance to observe the coop in action.  I could hardly believe it stayed warm and dry inside, because Lucifer the hurricane dropped enough water to flood my septic tank.  (I don’t want to talk about that, double sigh.) 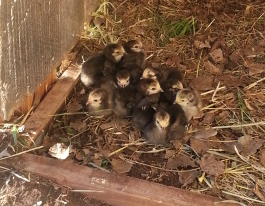 With the door in place, I hung the heat lamps, moved in the waterer and feeder, then scooped the chicks up from their bathtub into a bushel basket and carried them out to their new home.  They weren’t quite certain what to think.  They huddled under the heat lamps and listened to the rain pitter-pat on their roof.  The next day I opened the door for awhile even though it was still cold out.  A few of the braver girls came to look outside the door, but swiftly backed up.  Today, the sun came out.  I opened the door wide this time.  It’s like a game of “double dare”.  One or two dart outside, do a quick recon then dash back inside as the next pair take a gander at what’s outside in the big new world.

Me, I keep singing, “Here comes the sun and I say…it’s all right…”.  And it is.  Even if I don’t have any stinking lambs.