It’s almost Christmas on the farm and that means…nothing. I don’t decorate, not inside, not with indoor cats. A Christmas tree is nothing but a challenge to a cat. They race to the top, then challenge each other to see who can knock off the most ornaments. Put a pine bough and a sprig of evergreen Pyracantha (otherwise known as Fire Thorn–I hate the stuff but it refuses to die) on the mantelpiece and ten minutes later there are pine needles all over the floor and the bright red Pyracantha berries have become toys. Meanwhile, I step on the thorny branch and rediscover why this plant is called “fire thorn.”

So no decorations. And no food–no Spritz cookies, no Fattigman Bakkels or Julekage–Norwegian Christmas favorites from back when I had youngsters and lived closer to family. In case you’re wondering, I never developed a taste for Lutefisk and I’ve replaced Lefse with tortillas. My Mexican-born neighbor and I agree that the best way to eat fresh flour tortillas is spread with butter and sugar, then rolled up tight. Instead, this year I have one goal and only one goal–to start the new year with a de-cluttered house.

To understand why this is important to me, you have to know that I spent my life moving, first with my parents, then through two marriages. It got to the point that if I moved boxes more than three times and never opened them in between moves, I gave the unopened boxes away to charity. All that house shifting has turned me into a minimalist. I mean, what if tomorrow aliens invade and I have to take off for the border? Two big black garbage bags and I have everything I need. Somehow, this past year has resulted in at least two more black garbage bags worth of stuff appearing in my house.

The work began last week with cleaning the fridge. Then I re-canned the last of my jalapeno jelly into small, gift-sized jars. (Guess what my friends are getting for Christmas?) I’ve sorted through my precious wool socks and thrown away the ones with holes in the heels, because I refuse to darn. Worn sweaters? Gone! Shoes I wore last year and now have spiders living in their toes? Gone!

The last Hubbard squash that’s been on the deck since August? Almost not processed.

I remembered why I hadn’t processed it yet when I went out to bring it inside. Oh my goodness! It weighed at least 25 pounds.

Once I wrangled this behemoth into the house, I dropped it into the sink then eyeballed the oven. No way was it going to fit into the oven whole. I was going to have to cut it in half.

After washing it, I brought out my sharpest, heaviest knife. Whap! The blade bounced off the skin. Whap, whap, whap! I managed to make a small dent. Using the dent as a starting point I pushed the tip of the knife through the rind. It almost reached the meat.

That’s when the new guy in my life came to observe my efforts. He suggested we throw it down the stairs and see if that might break it. As that didn’t sound very appetizing to me, I suggested going down to the barn for a sawsall. By then I had worked that dent into a pretty good-sized steam vent. Because I didn’t want to walk all the way down to the barn just to cut a squash, I once again eyeballed the oven. What if?

Putting the rack on the lowest rung, I set my sheet pan on the rack. Back at the sink, I hoisted the squash in my arms, then wrangled it from the sink to the oven. Grunting, I dropped it onto the pan. One last little shove and it was suddenly and perfectly wedged firmly between the broiler element and the pan.

While I was doing that said new guy had found directions for cutting a Hubbard squash on the Web. The cook suggested a controlled drop from your waist to the floor in the hopes of cracking the squash. In the next line, the recipe writer added, “dropping the squash is easier than using a sawsall.” So there you go. I now know how to properly cut a 25 pound squash. 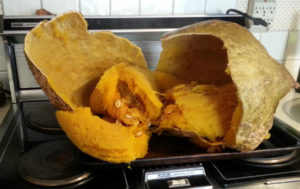 Since I had no intention of wrangling that thing back out of the oven, I set the temperature to 400 degrees. An hour and half later my knife slid easily through that once-hard rind and into the squash. For the record, cooking a squash does not change its initial weight. Grunting, I wrangled the pan onto the stove top, then stepped back and watched as the skin split. The squash meat fell away from the sides and dropped into a beautiful golden-orange pile. I’ll be spending the next half hour or so digging out the seeds, but it’s another chore done. Yay!

Once the soup is made, I think I’ll wash the windows. Merry Christmas everyone!