Today I bought collars and leashes for the puppies. I’ve hesitated to do this mostly because of Bear. He looks at a collar on any dog smaller than he is and thinks, “Oh good! They installed a handle on this toy for me!” He then lifts said dog and runs off with him, not noticing that he’s strangling his toy. It’s for this reason that Moosie goes naked, and the reason these puppies will be micro-chipped. 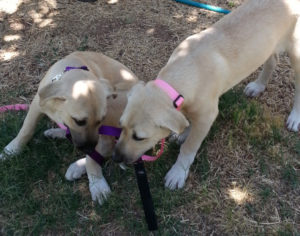 I’ll admit to wanting two pink collars, but the store didn’t have two so I settled for one purple collar and one pink one, then bought matching leashes. My girls are styling! Radha got purple and Kali got pink. When they’re wearing them we’ll be able to tell them apart with a glance, which won’t be all that often. Even though these collars were designed to grow with the puppy, I’m also not betting on them being big enough once the girls are adults. I swear these two are an inch taller every day! I’m now thinking they’ll top out at a hundred pounds each.

Perhaps I’ll need them for some of the lambs that will be arriving shortly. I used a dog collar for Peanut for a while, but he ended up so bonded that he followed me everywhere and I didn’t need a leash. He came when called, too.

So once their collars were on, I took them for their first official walk. Up until now, I’ve been controlling them with voice commands. They have “sit” down perfectly. They also know “NO!” but translate that to mean “I shouldn’t have done that, I think I better sit,” which works perfectly for me, since I usually only use “NO!” when puppies chase sheep or chickens. They also know “Come” but seriously dislike the meaning of that word, since it rightly indicates the end of playtime.

Actually, I’m only a part-time trainer. They’re learning best from interacting with Moosie and Bear. My boys are rarely ever on a leash and they almost always come when I call. What the boys do, the girls copy. The nicest part is that the boys have a limited tolerance for play time, Bear having far more than Moosie. When they’re done, they simply start back toward the orchard, leading the girls home. Nice!

Once on had their leashes attached, we started off across the pastures. Radha didn’t pull or resist the leash at all, just walked alongside and then a little ahead of me. Kali was more uncertain about this string attached to her neck, but when Radha didn’t react, she settled into walking at my heels. I was very impressed. We walked a while, then I let them cool off in the water, then took them past the sheep and chickens without incident. It’s almost too easy.  I’m sure they’ll give me fits later, but for the moment, they’re taking each other for walks in their pen. 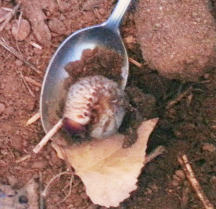 Now, onto the biggest dang Crawly Back I’ve ever seen in my life. First, if you don’t know, a crawly back is the larvae for the Green Fruit Beetle. It spends its early life in composty soil, crawling around on its back as it eats bits of organic matter. I think it uses its back because it has useless little feet on its sides and a segmented body with pretty good heft, so it’s easier to push itself through the soil with its back.

For the record, I totally approve of crawly backs in my compost but I don’t at all care for the adult version of this bug, the Green Fruit Beetle. Although this scarab beetle is a beautiful iridescent green and only about an inch and a quarter long, it can’t wait to get its mandibles onto my ripe fruit. I’ll find three or four all happily sharing a peach or plum. And they’re awkward flyers, more likely to bump into you than fly around you. The cats consider them toys, since once they’re on their backs they can’t easily right themselves. Kind of ironic, if you think about it.

This massive crawly back showed up in my Hugel, which has now decomposed nicely into a beautiful pile of dirt. I was planting pumpkins when my hoe turned him up. That’s a tablespoon he’s sitting in. This guy will be double or triple the size of a green fruit beetle when he morphs, able to take a whole peach in a single bite!  As much as I’d love to know what he is, I couldn’t leave him where he was, so I moved him to another composting area.

But I’ll be keeping my eye on that area. It won’t surprise me if one of those rhinoceros beetles comes walking onto the porch this summer. That is, if the chickens or cats don’t find him and decide he looks like a feast. I guess that’s okay, too.