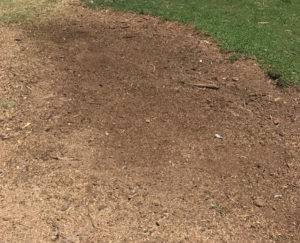 Yes, that is a picture of dirt. Well, not dirt.  It’s compost, specially made for me by piglets and chickens.  It started out as the contents of the turkey barn. That included manure (better known as poop), straw, turkey food, dirt and, most importantly, water.

The turkey barn roof leaks in a couple spots. These aren’t little leaks. These are “turn on the faucet” leaks.  Every time it rains, water hits the barn roof, channels to these low spots then gushes through the holes onto the barn floor. That would be okay if the barn floor were dirt. Instead, there’s a layer of cement plant conveyer belt, which is made from rubber, covering the dirt (not my first choice). I’m told the belt material comes from the cement plant up on the hill near Jerome. As near as I can tell, every old timer in the area has chunks of this stuff because all the locals have worked at the plant at one point or another.

But rubber on the ground means the water can’t soak through. Instead, it puddles on the rubber and creates a goopy mess that eventually rots. As long as it stays moist it’s a horrible stinky rotten mess. Then, once the weather gets hot enough to suck the moisture out of every living create, that gloppy mess because a crusty mess. Two months ago I confronted the three inches of crust with hoe, shovel and rake. Two days of work left the same three inches of crusty stuff about two feet outside the coop doorway, albeit broken up into shovel-sized pieces.

Oddly, while the birds ignored the stuff when it was in the barn, once it was outside they got interested.  Maybe that’s because it attracted flies. Although it attracted flies when it was inside the coop, too. That could be because this year is the year of the fly. I don’t know about anyone else, but I’ve seen one horse fly and a few bottle flies, lots of hover flies, but tons of those in-between sized guys.

So, the birds started working on this stuff, scratching and pecking.  After two months of effort they hadn’t made much of a dent in it. There were still pie-sized chunks of crust that would stink all over again when I irrigated.

Then came the piglets and their mama. With the piglets now old enough to graze, Mama has started taking them to the back pasture where they laze in the shade of the huge cottonwood, root through the soft red clay soil, graze on the thick bermuda near the fence and wallow in the muddy patch I’ve created for them. What a life!

Two weeks ago, when I again irrigated that field, I suddenly had a herd of pigs splashing and chasing in the water. That includes Mama. She’s feeling pretty good these days. Maybe because she’s only a year old herself–did you know a sow can live to be thirty (yikes!)?–she gets just as playful as her babies. While she’s not quite up to a game of tag and doesn’t care to worry sticks or clumps of weeds, she does love to run. And once she gets all 500 pounds of her to moving, she’ll add a quick skip. My sister Stephanie, who returned home on Sunday because I can walk again(!!), got to see her do it the other day. At a dead run, Oinker kicked her back legs out to the side and grunted in pure joy.

The seven of them were still there as the water began to soak into the ground. As had happened in previous irrigation cycles, the crusty stuff immediately began to stink.  And just like that seven snouts were in that layer of rotty moisty turkey food/poop stuff. To each their own, I say.

It became a free-for-all. Piglets turned dirt, hens darted in to steal the worms and grubs. Porcine heads swung to drive them away. That worked for the Brahmas, this year’s chicks. Not so the little black hens. Last year’s babies, a Jungle Fowl/Australorpe hybrid, are pretty unflappable (pun intended). If that ten pound piglet charged, offering a squeaky little grunt as she came, they just circled around and tried the back entrance.

Days. That’s all it took to turn what I’d been thinking of as a toxic dump into rich brown dirt ready to use for potting soil.  Oh my goodness!  It’s enough to make me consider going back into the coop and taking it down to the rubber lining. I love pigerators!