The weaning process continues, and continues to fail.  I’m pushing now for two days off, one day on.  Part of the reason I’m so unsuccessful (I think) is because the corral is all wrong.  Or was all wrong until today, many thanks to my friend Su Petersen of Verde Valley Alpacas (great roving and yarn for the knitters out there!)

The corral started out wrong.  The ground under it is fine clay, deposited over the millennium by Oak Creek.  It lacks any organic matter which means that although it can absorb water, the water it absorbs doesn’t go anywhere.  It puddles about 10 inches below the surface and stays there.  Worse, it’s clay.  So as the cows walk on the wet dirt it does what clay does and compacts beautifully.  Think adobe.  Think brick.  Think impenetrable.

Theoretically, what should have happened before we raised the corral was to build a bio-active base.  That means digging down about 4 feet, putting in some of the flood fall logs, then topping them with a thick layer of organic matter and topping that with bio-active soil (i.e. compost).  After that, we could have added the native clay.  Since that didn’t happen, I’ve got what I’ve got, as they say.

It isn’t so bad in the open area of the corral, where the sun hits even in the winter.  That area tends to dry out better.  But under the roof, where the stalls are, it simply doesn’t warm up enough to do anything but freeze, thaw, seep and freeze again.  This last week I acknowledged that I had to do something. I tried raking off the layers of straw I’ve been adding in an attempt to do…um, something, I’m not sure what.  No dice.  Where it was frozen, I couldn’t move it and where it wasn’t, it was so wet I couldn’t lift it. So I brought out the broadfork. 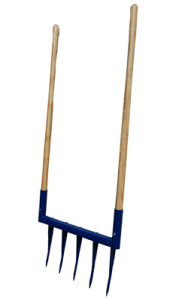 If you don’t know what a broadfork is here’s a photo.  Frankly, this is the best core strength building piece of equipment known to Mankind.  Thrust the tines into the soil, balance both feet on the bar while holding the handles and rock back and forth, driving the tines deeper.  Then step off and lift.  I worked both stalls three times this week.  I hit “bedrock” (that compacted clay) all three times, but succeeded in turning the top 7 or so inches of poop-filled, matted straw stuff.  The smell that followed told me clearly that I had lots of anaerobic bacteria.  There’s no stench quite like it.

That also told me what I had to do.  First, the calves couldn’t use the spare stall (the wettest one).  But it’s cold and they need at least a little protection from the weather. Ah-hah!  I’m no longer storing hay in one end of the bale storage area.  That meant I had the long narrow area between the stalls and the turkey coop for them to use.  Its placement means it’s warm (relatively) and dry. That’s why we’d been storing hay in it.  That also gave me an exclusive “calf” entrance to the corral, and that meant I could keep Hannah locked up away from Elsie without having to ward off Elsie.  Yay!  One problem solved.

But what about Elsie?  She can’t be using that stall with all that icky stuff beneath her feet.

That’s when the light bulb went off over my head.  I had five more pieces of pipe corral fencing.  All I needed to do was divide the corral in half.  Ta-da!  Two sides of the corral, Hannah on one, Elsie on the other, both of them with plenty of room to stand or lay where they want.  After that I’ll line the north side of the corral with the 30 bales of straw I just ordered.  That will give  Elsie a warm place to huddle outside of the stalls.

That’s where Su came in, helping me to carry and bolt the extra panels into place.  Then we reinstalled the plastic chicken wire between the bottom pipe and the pipe above it.  Why do that?  Because I’ve caught Hannah and Elsie lining up against the fence so Hannah can snack on milk.

As for Elsie’s stall, I went over it again with the broadfork, then added a thick layer of dried leaves.  Tomorrow, after the bales are in place,  I’ll saturate it with whey, and hopefully the composting will begin.  Even if she chooses to stand in it, she won’t be ankle deep in anaerobic bacteria and that’s a good thing.

And if she wants to spend time with her baby…well, they can lay back-to-back in either side of the fencing.  No more milk for Hannah!