So, it’s been another crazy week here on the farm. We’ve had storm after storm, most of them offering rain–enough that my grass is now knee-deep. And me with no time for mowing. Or for cutting up huge logs that crush my fence.

The storm three days ago included really high winds. As I made my post-storm walk, looking for damage I found that my back cottonwood had dropped a huge widowmaker, a massive branch that easily weighed in at a ton. My initial reaction was excitement. Whoo, it missed the fence! 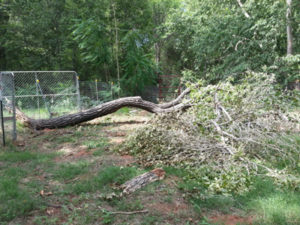 Then sense kicked in. The branch had come to rest leaf-side down, and stood upright, like a thirty-foot tall upside-down tree. Yes, the fences were intact for the moment, but that was only because the branch hadn’t finished falling. Two of its possible paths included a length of exterior fence.

Sure enough. When it finally came to rest, it was across the fence, crushing the fabric. I’ve erected two chain link panels as temporary fencing around the end of the branch to keep my critters enclosed and safe until I can begin whittling that thing down to size. As I watch today’s storm roll in, I’m hoping nothing else comes down for a while. I don’t have that many chain link panels left.

Now onto how my pigs are creating family where none exists.

I’ve mentioned this before but it’s worth stating again. Some ten years ago or so I was listening to an NPR article about a guy who’d started a pig rescue. His rescues were mostly pot-bellied pigs who had outgrown their owners’ homes and expectations. At the end of the article, he said, “You know, cats have staff and dogs have masters, but a pig thinks everything is a pig.” As near as I can tell, that’s the God’s honest truth. Although my now much larger weaner pigs spend much of their day in the back pasture, I’m still feeding then in my fenced orchard. This is because they need to be accustomed to near the front barn. As December closes in I’ll begin inviting them ever closer to that barn and their ultimate end. However, feeding the pigs in the orchard means there’s always a few crumbs of their food left when they’re done. This is something June the Cow has not only noted but come to enjoy. She thinks pig food is pretty darn tasty and I allow her to clean up after the pigs because pig food dust isn’t going to mess with her digestive tract.

Apparently, not everyone on the farm is as copacetic with this arrangement as I am. The biggest of my gilts (girl pigs) has designated herself the future Head Sow. In her little piggy mind, that makes it her job to take umbrage with a cow getting even tiny particles of a meal meant for hogs.

The other day I took a bucket of fallen fruit to the back pasture where I had all my critters that day. The pigs were on the fruit in a heartbeat with June following close after. The sheep, who are more cautious by nature, stayed on the periphery, not really wanting to get involved in the scrum of chickens, turkeys, five pigs, and a cow.

As I watched, Head Sow put her snout on June’s forehead and in a deep piggy voice went, “ha-ha-ha-ha-ha.” That’s hog-speak for “You’re trespassing in our food again and I’m going to take you out of this world when I get a little bigger.”

I expected June to swing her massive head and send that piggy girl flying. Instead, she very gently pressed her head against Head Sow’s snout and carefully shifted the maybe 70 pound gilt to the side. Translation: “You and what army?”

As this was going on at the front of the cow, one of the other little gilts became fascinated with June’s leg. Pressing her snout against the leg, she snuffled her way up then down, ruffling cow hair as she went. June froze where she stood, her head still lowered. Her eyes drifted to half-shut and her face softened in what was clearly pleasure. Up and down the gilt snuffled, then she shifted and put her mouth on the triangular bit of horn at the back of June’s leg. That rough bit of keratin is the toenail of what is now one of a cow’s two vestigial toes. They started with four and over time it became two.

I couldn’t believe it, but that pig was eating toenail! June remained where she was, eyes half-closed. I looked closer at the back of her leg and noticed that the opposite “toenail” had already been chewed to almost flat.

So this wasn’t the first time that my cow had stood still for a pig-pedicure. The gilt shifted under June and went to work on another toenail. All of a sudden, June gave a tiny flinch then carefully stepped over her porcine groomer and went off to graze. I’m guessing the gilt had gone as deep as she could. That reminded me of the day I caught two of my previous gilts sitting on either side of Peanut as he chewed his cud. Each pig was gently running one of the lamb’s ears through her mouth. Like June, Peanut also had a blissful look on his face.

The moral of this story? I’ve lost a fortune on Youtube because I cannot remember to bring my camera or phone with me when I leave the house. Well, that and there’s something special about living in a place where everything’s a pig.