It appears from this title that I am on a “D-D” kick.  Perhaps this is apropos as my initials are “D.D.”  Over the years a few people have tried to call me Deedee, but I’m really not a Deedee.  I am Denise, named for a villainess in a Frank Yerby novel. (Hmm, do you think that steered me into authoring historical novels?)  My father tried to soften the somewhat awkward name by calling me Den-den. No one else was ever allowed to call me that. It’s even worse than Deedee. Enough about me. Let’s talk ducks.

I have wanted to raise ducks for years.  If you, my plucky readers recall, I took on three of a friend’s Rouen ducks in 2016 (back when I didn’t know the difference between Welsh Harlequins and Rouen ducks). It did not go well. Both drakes disappeared and the hen went back to Su’s house to become an owl meal. I thought both drakes were dead, but that may not be the case. 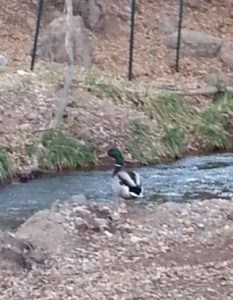 About two weeks ago a drake and a hen appeared in my pond. The difference between Rouen ducks and Mallards is pretty subtle, but these guys made it instantly clear that they knew what a farmyard was.  When my turkey hens took umbrage at their presence–parading up and down the edge of the pond, their feathers spread in threat–the two ducks floated calmly to the middle of the pond as if to say, “Yeah, right. Come and get us, if you dare!” Then they waited until the turkeys lost interest, came out of the water and began to look for the seeds I’d earlier tossed to my flock.  These ducks know dogs and recognize the possibility of human-carried buckets. They’re cautious but not afraid. Oh yeah, someone once owned these ducks, or at least one of them. Could this be one of Su’s drakes, bringing his wild girl home during the hungry season?

Whether Su’s or someone else’s lost ducks, these two swiftly figured out my routine and began to show up just before feeding time. They wait in the pond, watching me in expectation. If the turkey pressure is too high, they float down the ditch to wait behind the turkey barn. Their hope is so charming that they now get what they want. These days, I add a few more handfuls to my scratch bucket just for them.

Feeding them has required Moosie work. For a full week, every time he and I walked past them, I’d point them out and say, “Those are my ducks, Moosie. You cannot kill them.” He pouted for a few days, but appears to have accepted my edict. Now, Bear on the other hand, is not nearly as trainable but neither is he as lethal. No, my big beautiful boy is just looking for some fun and these newcomers don’t know just what a big pushover he is. So, when he sees them, he bounces at them, hoping to startle them. It’s his favorite prank to pull on the farm fowl.

Sigh. I miss Gabby Gray. Bear tried that on her and got a face full of angry turkey. Even at his size, that’s intimidating. Ask the Black Hawk. 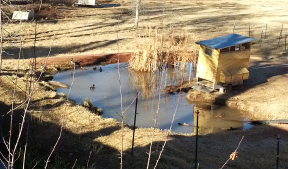 After more than a week of encouraging these ducks, there was a strange development. One day, the pair showed up with another hen. The next day, they came with another drake. Day three and there were now two pairs waiting to be fed.

Huh! They were so certain of me that they were inviting their friends to join them.  Then on day four there were three couples. Hoky smokes, Bullwinkle!

These new couples are clearly wild ducks and aren’t nearly as comfortable with me and my dogs, but they deftly handle the turkey threat by moving into the ditch until the hens give up. As soon as the bigger birds have moved on they return to look for the seeds the chickens and turkeys missed.

What a pretty picture they make as a flock!  As far as I’m concerned, the smorgasbord is open when it comes to dandy ducks.