Here on the farm, I am officially suffering the Dog Days of summer.  Not because we haven’t had one worthwhile Monsoon storm, not one decent roll of thunder or cooling spate of rain. And not just because we’re in the 30 to 60-odd day stretch that has been known as the Dog Days almost since humans have been able to write. Indulge me for a minute before I get to this week’s story.

When I wrote the title for this post, I realized I didn’t actually know how mid-July through mid-September got to be known as the Dog Days. Until a few minutes ago all I knew was the Medieval designation Dies Mali, Latin for “bad days,” which was used for this period of the year.  I’ve used that Latin phrase in my novels more than once because in the Middle Ages it was the go-to excuse for anything that went wrong during late summer. It’s August and the milk soured (because you didn’t put it back in the ice house)? Dies Mali.  It’s late July and you didn’t make it to mass (because you overslept)? Dies Mali. The tablecloth didn’t come out as white as your mistress wanted (because you didn’t take the time to scrub out the stains)? Dies Mali.

Enough of that. Here’s our history lesson for the day.

It’s the star Sirius that gives the Dog Days their name. Also known as Canis Major, or Big Dog, Sirius and his buddy dog, Canis Minor (Little Dog) follow Orion the Hunter through the sky. It just so happens that Sirius rises around July 19th, about the same time that 1) the Nile floods, bringing new fertility, and 2) the onset of a couple months of sweltering weather in the Northern Hemisphere in general and Western Europe in particular.

The Greeks were among the first to make note of their complaints about this stretch of the year, most likely because it messed with their wine making. The pundits of the time highly recommended that vintners get their wines in casks before Sirius rose. As for the weather, they warned that there would either be sudden thunderstorms (not good for grain farmers) or scorching drought. Sort of like it’s been here here in Northern Arizona this year.

One Greek poet suggests the Dog Days have an effect on plants, animals, men and women:

…in the season of wearisome heat, then goats are plumpest and wine sweetest; women are most wanton, but men are feeblest, because Sirius parches head and knees and the skin is dry through heat.

Huh. That explains a lot. It’s definitely Dies Mali if the women are wanton but the men are at their feeblest.

To finish up this lesson, I’ll include a snippet from Homer’s Iliad, in which the Dog Days are used as a metaphor to describe the approach of Achilles to Troy:

Priam saw him first, with his old man’s eyes,
A single point of light on Troy’s dusty plain.
Sirius rises late in the dark, liquid sky
On summer nights, star of stars,
Orion’s Dog they call it, brightest
Of all, but an evil portent, bringing heat
And fevers to suffering humanity.
Achilles’ bronze gleamed like this as he ran.

Now as to my particular Dog Days and Dies Mali or rather Diem Malum (bad day) story. Today, the puppies killed a chicken. They not only killed it, they consumed it, eating out its innards but leaving the still-feathered “good” meat. Maybe they didn’t care for the taste of the feathers. She was still warm when I found her, but there wasn’t a drop of blood left to her, just a dry, bony carcass. Suffice it to say both pups are now wearing their training collars.

These are the same collars–or collar, as I only used one for Moosie– that I bought to keep Moosie from killing chickens. By the time I got that collar on him, he’d done in nearly forty chickens and God only knows how many turkeys. That collar saved him and me, since I don’t know what I’d do without Midwife Moosie in my life. I’m not certain I ever broke him of the turkey killing habit. Instead, we came to detente. I put away the turkeys before dark and he doesn’t kill them during the day. Out after dark, unless they’re sitting on eggs, and he kills them. 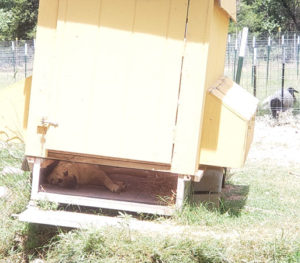 I’m committed to getting the same result with the girls, but doing it this time after losing no more than three birds. (I’m giving myself some leeway on this goal.) Let me say this about those puppies, now that they’re almost as big as Moosie. I watched them as they moved along the fence line today. They are truly magnificent animals, sleek, muscular, and crazy fast. And definitely lethal, or so they proved this morning. Once I get them in line and they settle into their purpose here, I pity the predator–any predator–that crosses my fence.

As for my own Diem Malum, the turkey eggs began to hatch today. By noon I had five new hatchlings. By 1 PM, two of the hatchlings had been pecked to death.

When I found the first dead baby, I blamed the two chickens who happened to hanging out with Tom today. These two keep flying over the new fence to come up to the house. That’s because they found the food I keep here for Tom and the sitting girls. They were natural suspects in this murder because chickens are by their natures killers, little Tyrannosaurs. They’ll kill, and eat, another hen’s babies without batting an eyelash, or a feather. If you see an egg carton marked “Vegetarian Fed,” know that’s an unnatural diet for a chicken.

So I chased those two girls back down to the pastures and thought the matter resolved. Instead, I came back an hour later to see how many were now in the nest and found another murdered baby. Being a mystery writer that left me to deduce that the only possible culprits were the two half-grown turkey poults left from this hen’s last set of hatchlings. It took me an hour but I got the two of them locked into the brooder coop next to the barn. 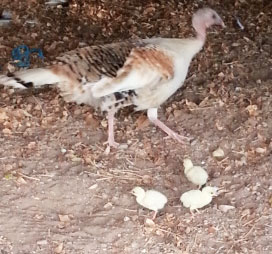 My goodness, how I love that brooder coop! I should have built it eight years ago. I would have saved myself so much hassle and work. The only reason the coop was available at the moment is because my new meat birds don’t arrive until next week and I slaughtered all thirty of my grown meat birds on Saturday. Don’t they look pretty, all bagged up and purple-stained!

As I always do when slaughtering birds, I gave the chickens their last meal at noon before D-Day. That makes it much less likely that there will food in their crops or intestines, although there’s always something in their gizzards. To keep them from grazing Saturday morning, thus adding anything to their tummies, I didn’t open the brooder coop…

…Into which I had dumped two wheelbarrow-loads of dried mulberries last month. These were berries I’d swept up from my barn driveway. I didn’t think about it because those birds hadn’t once touched the dried, crumbly purple bits. But these chickens were unstoppable eating machines, ravenous, ever-empty walking stomachs. Apparently that last twenty hours without food left them hungry enough to that they ate the dried mulberries, which then reconstituted in their digestive tracks and I released during the slaughtering process. Purple streaked their flesh, my hands, my clothes…everything. Diem Malum.