Here we are again, starting into the dog days of August, and boy, oh boy has it been hot here. We had two days–maybe three; I can’t remember because the heat addles my brain–over 105 degrees. That’s really unusual for us, and it’s made worse by the very thing that usually makes this place livable: water. I don’t care what anyone says. 109 degrees and humid is awful, even if the humidity is only 60 percent. Everyone, from the chickens to the poor, plush-furred rabbits to the woolly llamas, are hot. (The sheep don’t seem to be bothered too much, though.) Kali allows me to hose him down. Scout isn’t having anything to do with that.

Speaking of Scout, he’s doing much better in his new pasture. I watch him make his way around the space, tottering a little over unexpected berms and logs, but not falling. He’s begun munching on whatever leaves are at his nose level, with walnut leaves being his particular favorite. He must like their lemony smell as much as I do. And walnut is a great dewormer, in case he has such a gut problem.

But back to the heat. The only things that seems to be enjoying this hot, humid weather are the plants in my gardens. My pepper plants are five feet tall, I have zucchini coming on strong (the chickens love it, so I really can never have enough). As for melons, I’ve got ’em although I’m going to have to read my earlier posts so I know which ones are which. The San Marzanos–the seedlings tomatoes I planted last–have beat out all my other seedling tomatoes, and are putting on berries as fast as their flowers open. That said, I do have baby Cherokee purples on a few of my home-grown plants. There are also some monster tomatoes ripening on the Cherokees transplants I purchased.

There’s spaghetti squash, butternut squash, pumpkins, cucumbers galore, and I’ve already made a couple of quarts of a very tasty refrigerator pickle. Then I found a half dozen of over-ripe cucumbers that I’d somehow missed in the jungle of their vines. Research suggest these make great relish or a cubed pickle that taste much like pickled watermelon rind, which just happens to be my–and my grandmother’s– favorite treat. It’s her recipe I use to make them. Funny, I don’t really like watermelon that much. The only thing standing in my way is that I can’t find any Mason jars at the moment. It seems everyone’s taken up canning this year. I guess I’m going to have to open the boxes I packed when I was planning to move two years ago. I think I’ve got canned goods from 2012 that I can dump and reclaim those jars. 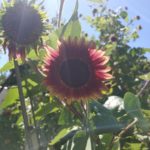 Every three days or so I pick a pound and a half of Blue Lake green beans while my Blue Lake pole beans, which are now a land race plant for me, having grown on the property for seven years, are so heavy with pods that they’re bringing down their supports. That would be a wall of sunflowers I grew just for them. I definitely didn’t plant enough Black-eyed peas, but I now have enough seeds to do it right next year. That said, these successes come with a real disappointment. Neither my Scarlet Runner beans nor my Aztec Long beans are setting on. I looked up pole beans to see if I could figure out what went wrong and the advice was pretty useless. Could be too much water or not enough water, too much heat, not enough heat. Or not enough pollinators. That’s definitely not the problem. All my plants are crawling with everything that loves nectar, including honeybees. It seems my previous wild hive didn’t move far when they left the massive, ancient cottonwood at the back of the property. 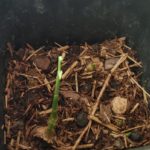 I’ve even got ginger starting! The root sprouted in the house and, despite my failure at growing it couple of years ago, I thought I’d give it another try. The problem wasn’t sprouting them or getting them to leaf out. The problem arose when I tried to overwinter them. You see, I kill houseplants. I’m don’t know how that possible, but it’s true. I just don’t get houseplants. Maybe it’s the pots. I’m used to rough and tough plants, ones that scrabble to draw what they need from my barely adequate soil. Maybe indoor plants are just too finicky. Whatever that prejudice is, I’m going to have to put it aside and make this happens. I want to grow my own ginger!

Until then, stay cool and may dirt lodge permanently under your fingernails (as it has mine).