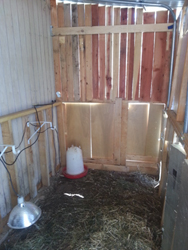 Before I get to the dog part of this story, I thought I’d update you all on my newly completed brooder coop. At last, after sorting through all the many bits and pieces of this and that cluttering my barn, buying as little as possible and when necessary from Restore, the coop is done and the barn is clean. Well, the barn is clean for the moment. My project du jour is in the back barn. Now that I’ve ordered 32 hen chicks, I’m turning the big turkey barn into a nesting area for both the chickens and my three turkeys. The south and central portions of the pole barn will become their fenced roosting area. All of this to outsmart the ravens, something I’m not entirely certain I’m smart enough to do. When that’s complete, I’ll go back to the front barn and begin moving my commercial kitchen equipment from the house to what used to be the barn’s fodder room. Ah, the life of someone suffering from (Non-Attention Deficit) Hyperactive Disorder.

Now onto the dogs. I think I’ve mentioned that Bear, my 135 pound Hungarian Kuvasz suffers from arthritis. Although he was never a dog to come running when called–in fact, he likes to take a few moments after I call to consider if it’s worth his while to respond–last year saw his mobility degenerate to a snail’s pace. He also stopped playing with Moosie. I took him to the vet who reminded me that Bear was then going on seven– almost 50 in human years–and suggested glucosamine, which I tried to no avail. After that I tried CBD oil in various strengths. I upped his fermented foods, tried turmeric, tried garlic. Still no luck. Then while walking up an aisle at the health food store my gaze came to a stop on the Wobenzymes. I’d taken this supplement years ago for my rheumatoid arthritis after the Mayo Clinic politely asked me to take my business elsewhere since they couldn’t help me.

With nothing to lose and hope springing eternal, I took them home and, voila! After two weeks on the supplement, Bear not only recovered his ability to run, he was back to playing with everyone. All the time. Unfortunately. I’d name it a a miracle but he still doesn’t come when called.

Happy that I again had two functioning dogs and didn’t need to face the prospect of buying a puppy to replace one of them, I came out for morning chores yesterday and found Moosie walking on three legs. He had his left front leg held high and his face said he was really hurting. Worried (and grateful it was Sunday as my vet is open on Sundays) I brought him inside and checked his leg. There was nothing embedded in his paw and his bones were all solid. He crawled onto the couch in my writing area and went to sleep, poor thing. That’s when I remembered that my new ranch manager Christina had just taken a course in animal massage. She came by a little later and found the problem.

Moosie’s been climbing trees again. Or rather, my (Non-Attention Deficit) Hyperactive Disorder dog has once again been TRYING to climb trees.

That dog spent too much puppy-time around the cats. In his first year here he noticed one day that the cats all walked along the retaining wall behind my pump house. In the spirit of “I can do better than you,” he jumped onto that narrow wall and followed them. He still walks that wall today. When he saw the cats climbing trees, he also gave it his best shot. His interest in climbing might have faded with time and failure except he discovered that raccoons and squirrels could escape him by climbing trees, and the challenge was on. 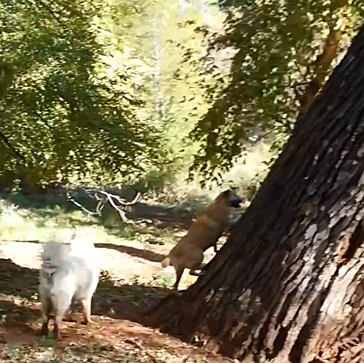 This photo is from October of 2017 when he and Bear had treed a bobcat. I watched him go almost six feet up that trunk on sheer willpower…and took him to the vet the next day because he had wrenched his shoulder. That’s what Christina found. Moosie had once again overworked his left shoulder, no doubt trying to climb a tree after some varmint.

Seriously dog, you’re seven now. Stop thinking you can do things as if you were 2! Down, Moosie!

Oh, wait a minute. If I tell him that, he’ll turn around and tell me “Down, Denise!” Then what will we do with all our excess energy? Climb, Moosie. Climb.

2 Responses to Down, Moosie!