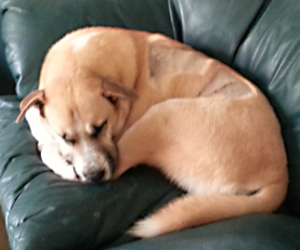 This post started out about the bees but then my two way-too-big helper pigs appeared and I couldn’t resist adding them to the story.  But first, a Moosie update.  His stitches were removed yesterday.  THANK HEAVENS.  That dog turned out to be a terrible patient, mostly because he has no patience with being injured.

It started with the doctor’s order to keep him quiet and confined. Yeah, right.  I put him in the big bathroom near the commercial kitchen (handicap accessible).  It has a tile floor so I could hear him pacing and turning, then scratching at the door.  I settled for letting him sleep on my new-to-me leather couch in the front room and in my bedroom at night.  Not even that kept him quiet. By the end of the first week, I’d given up on keeping him inside during the day, and was instead allowing him to sleep on HIS blanket outside on the porch.  He was actually quieter there because he and Bear could be together.

Then there were those antibiotic pills, to be taken 3 times a day.  He took the first three, then began eating the good stuff in which I was hiding the pill (much to my surprise he likes the Pill Pockets–he usually doesn’t like conventional treats) and spitting out the pill.  Which Bear then immediately ate.  Since that wasn’t really the intention, I gave up.  He’s a healthy dog and didn’t have a trace of infection.

And what about that t-shirt he was supposed to wear to keep him from scratching at his stitches, you might ask.  The second morning I found the dog on the couch and the t-shirt on the floor.  Thinking I had lost my marbles (this is happening slowly, marble by marble), I figured I’d left his shirt off when I checked his stitches that first night. Angry at myself, I restored the beer-sloganed shirt/rag that my renter had donated to the cause.  That afternoon, Moosie was once again naked.  Now intrigued, I again restored the shirt, then kept checking on my too-smart-for-his-own-good dog.  Sure enough, a little while later he slinked off into my bedroom.  I found him with his back feet pressed into the t-shirt hem while he was thrusting his head and shoulders out of the neck and sleeves.  This definitely wasn’t good, since he was yanking and pulling the shirt off over his stitches.  I considered running for my phone and recording it, but I couldn’t bear that he might hurt himself, so you’ll just have to believe me when I tell you that’s what he did. The result?  I set aside the shirt permanently and instead kept an eye on Moosie, warning him not to scratch whenever I caught him lifting a paw.  It worked.  He has healed beautifully, although he now sports a pretty funny looking haircut.

Onto the bees.  There are two times of the year that the sixty thousand or so bees that live in my back Cottonwood tree become a problem for me: early Spring and mid-Autumn.  In early Spring, the bees wake up from their Winter snooze and hurry out, only to discover that not much is blooming other than arugula.  However, there’s plenty of turkey and/or chicken food.  All of a sudden, I find my birds sidling and shuffling around their feed, eying the hordes of buzzing bees with substantial caution.  Birds get stung too.

Although the bees aren’t very aggressive in the spring, this isn’t true for Autumn.  This time of year, as the overripe fruit drops, the bees zoom in to bury themselves in the sweet pulp.  Lost in ecstasy, they carve big holes in the fallen fruit, each hole scored with perfectly straight mandible lines.  But here’s the problem.  The fruit isn’t just sweet, it’s fermented.  That’s right, the bees are getting tipsy. Put a little alcohol in ’em and my usually mild-mannered bees get feisty.

Dang, not feisty.  Diana Galbaldon ruined that word for me when she told me it was Lowland Scots for “farty”.   But you get the idea.  I was stung twice last week picking up apples because the bee wasn’t about to give up her precious booze.  Never mind that this cost her her life and only made me uncomfortable.  All of us–the sheep, the turkeys, me and the gilts–are eying the fruit on the ground very carefully.

Speaking of the gilts, my little girls aren’t so little any more and are beginning to do some of the destructive things that hogs are famous for, such as breaking through the chain link panels that surround their little house.  Boinker is culprit in this case.  Given that she’s a little smaller than Oinker, she can still slip through the head-sized hole she opens in the chain link, leaving Oinker stuck inside the pen.  This causes some riotous, blood-curdling squealing as I approach the back field with their breakfast.  Oinker is terrified that Boinker might get to the food first, which, actually, Boinker usually does despite her smaller size.  I’m sure my neighbors are thrilled with this dawn serenade. 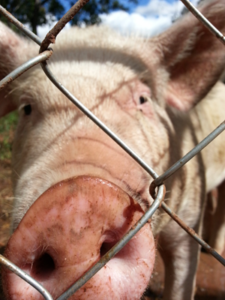 My solution has been to “sew” the chain link back into its metal frame using bailing twine, which is plasticized and pretty darn strong. Yesterday, I sewed the third panel, including cinder blocks in this repair since Oinker had followed Boinker through and really torqued the mesh.

This has not been easy to do, let me tell you.  Hogs are, indeed, like dogs and they have bonded to me, accepting me as another pig in the herd as it were.  This means they insist on knowing what I’m doing and why and if they can help and if they can’t help, can they at least watch from about a micron’s distance? I have had to lock myself inside the pen and finagle my fingers and the twine around snouts pressed to the metal from the opposite side of the panel.

So far my repairs are holding, but I think the twine won’t last forever.  It’s time to consider rebuilding the enclosure with hog panels.  Hah!  I’ve got you now, my pretties!