The Mason Ditch, which runs like a stream through the middle of my farm, has been empty for much longer than anyone who depended on this water liked. Well, sort of empty. Water always finds its way, even when everything is shut off. Mostly, that’s Page Springs leaking, whether on purpose or because something’s on the verge of breaking. Suffice it to say that over the past month the Mason Ditch dried out until it was nothing but a series of puddles, the deepest of which was just beyond the bridge at the front of my property.

A month was all it took. The ducks became accustomed to sliding down in that deepest puddle, then waddling downstream through the series of damp spots toward the middle bridge, where there was a little more water. From there, they’d head back to where the water completely disappeared. It was in this spot that one of the duckie-girls began to lay her eggs. She had been trying to hide her eggs in the thickest stand of irises on the pasture side of the bank. But Radha quickly discovered that spot. That’s when the hen discovered the area where we’d put our mushroom logs. She made a nest deep in a tangle of blackberries. This served to daunt Radha and left me pricked and poked when I picked up eggs.

I have no idea where she’s laying now because two days ago the water returned to the ditch.

What I expected to be an exciting moment for the ducks has collapsed like a souffle. The water made its reappearance late in the day, after the ducks’ usual 3:00 P.M. retreat to their coop. It started with a trickle, then, rushing and tumbling, it swiftly rose a little above its usual height, a point about halfway up the banks. 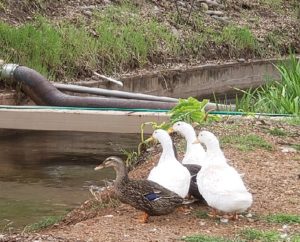 The next morning, I hurried to open the duck coop. I watched with a smile as the ducks raced to the edge of the ditch. There they stopped. The five of them stood in a line, staring at the fast-moving water below them. Much quacking and neck-craning followed as they discussed this unexpected change. One of them–I think it was the same Messenger Duck from last week–disappeared over the edge of the bank only to reappear an instant later. More quacking and neck-craning followed. Turning their back on the ditch, they retreated to their coop and stood in its doorway for a moment.

Once again, they hurried toward the ditch. Again, they stood there in a line, studying the rushing water. Nope, it hadn’t changed. This time, they crossed the pasture to look at Oak Creek. They discussed the power of the creek for a moment, then grazed their way back to the ditch to survey the water. They did this again and again over the course of the day.

Thinking they needed some encouragement, I chased them into the water. They all hit the surface, then instantly raced back up the bank, their wings lifted as if they were afraid of getting burnt. After that, I left them alone. They wandered the orchard pasture all day, only going far enough into the ditch to wet their beaks.

This morning I opened their coop door, hoping they might have changed their minds. They haven’t. They’re once again grazing in the orchard–and stealing chicken food, I might mention. At least it’s raining today, so they don’t have to risk life and wing going down into that big, scary stream to dampen their noses.

Huh. I have no idea what to do about this. One thing’s for certain. They aren’t getting their pond back, not now that I’ve become fond of duck egg omelets. They’re just going to have to remember that they used to like fast moving water. Bird brains!