It’s the time of year again, the short period when the Mason Ditch shuts down for maintenance. That means it’s time for chickens to feast! As the water drops to a trickle, my hens move into the mucky channel, all of them making happy little purring sounds. Every worm, every strange looking bug or dragonfly nymph stuck in a small puddle, is fair game.  I make my own happy little purring sound as I watch them eat. Every bug means they eat less purchased food. Nice! 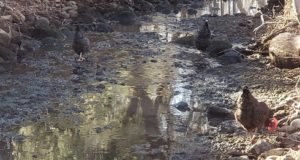 Today, as the water slowed to a trickle, I moved from the bridge where the ditch enters the property to the bridge where the ditch exits to install my animal-retention devices. (These are otherwise known as a rusty old gate and a pair of handy panels.) Once they were in place Christina and I made our way slowly back up the ditch, checking each puddle for interesting life. I found what I consider a good sized crawdad and offered it to one of my girls. She snatched it from me and raced away, carrying at least some portion of the crustacean in her mouth.

This is normal chicken behavior when a hen finds something truly delicious. That’s because chickens are terrible thieves. If the other hens notice the girl with the goods, pursuit ensues, becoming a crazy game of bumper cars, the morsel moving from one beak to another until someone manages to swallow.  In this case, no one followed. Why, when there are more tasty morsels than any hen has ever dreamed of, just waiting at their toes?

As we reached the middle of the property, we discovered Rupert on the opposite, usually unreachable, side of the almost empty ditch. He was whining piteously. Some time ago, he slid into the ditch and was caught by the strong current. Although he managed not to be swept downstream, he apparently hasn’t forgiven the water for terrifying him. Today, with nothing but a puddle between him and us, he refused to put his paws in it. After much encouragement, he screwed up his courage and leapt over the muck. 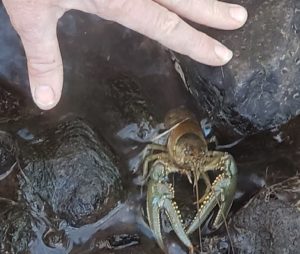 That’s when Christina spotted them. Two absolutely massive crawdads. I’ve never in my life seen them that big! Even though they might have been big enough to make for a decent appetizer, I wasn’t going to brave those claws. (I don’t like the taste of them anyway.)

It was as we caught this picture that Rupert noticed what we’d found. All of a sudden, the danger of Mason Ditch puddles was forgotten. He dashed into the water and grabbed the big guy. An epic battle and some thievery followed, claws and jaws snapping. Radha got her mouth pinched. Rupert kept rolling the crustacean on its back, trying to get his teeth into it before it got him.

Amazingly enough, the puppies lost and the crawdad made its way back into the water, all limbs intact. But for how long? Although clearly this crawdad has managed to survive a good long time and is far too big for any of my birds to tackle, chickens aren’t the only hunters looking for easy peckings while the ditch is down. In a few days the raptors will show up, feasting on the catfish, baby carp, and occasional small trout that get trapped in the bigger puddles.

Keep an eye on the sky, big guy! You’re just the right size for an eagle snack.

← Still Working on the Creek
Another 31 Days →