Now, onto my persistent egg dreams. For the first time in seven years I have no chickens and no fresh eggs except for those I buy from my local farm buddies. Having to bridge the gap between those I buy locally with the occasional store-bought dozen is causing me serious stress. Each time I reach for a carton of eggs in the supermarket, I cringe. They just aren’t the same!

How could I have even imagined I could go without chickens for a year? It’s not possible. That’s driven me into dreaming of the day when I again chase chickens into their coop at night. It’s hopeless. I’ve even started to (virtually) flip through hatchery catalogs, perusing the many different breeds of chickens available.

For all of you gardeners out there, this is very much like slavering over seed varieties. I see one breed that I love, then flip to the next breed and change my mind. Or worse, think I want them both–or all.

That’s something I’m pretty committed NOT to doing. The wisest thing I’ve learned since getting my first three chickens is that you should buy a different breed of chicken each year so you always know how old they are. Otherwise, you end up slaughtering your best layer instead of her grandmother.

So what breed of chicken calls to me this year? I know I’m not going back to the Brahmas.  As sweet-natured as they were, they were too big.  I think chickens must be like dogs, the larger breeds (like Bear) aging faster than the little breeds because those Brahmas looked like ancient hens after they came out of the plucker. Over the years I’ve had quite the assortment, birds that lay white eggs, birds that lay blue eggs, brown egg layers and even a hybrid that laid khaki green eggs. There’ve been Buckeyes, Astralorpes, Ameraucanas, Barred Rocks, Rhode Island Reds, Speckled Sussex, Orpingtons, and that nasty Jungle Fowl/Astralorpe rooster that killed my best laying hen. He didn’t last an hour after he did that, but his sisters turned out to be really good egg layers.

I’m sure I don’t want Bantams. Their eggs are too small and with a Blackhawk nesting in the corner of the property, they’d be gone in a season. And I don’t want those foolish Polish things with the feathers in their eyes, nor do I want the Turken. Although the one Turken hen I had was very nice, I just couldn’t get used to that naked neck. (This is coming from someone who thinks turkeys are beautiful.) The Orpingtons were broody, the Rhode Island Reds pretty aggressive with the other birds. The one Speckled Sussex rooster I had was calm and mild-mannered.

I’d love to do the Buckeyes again. Talk about steady and easy! They’re good in the heat and good in the cold, and they have the added benefit of looking a lot like baby Eagles as they’re fledging, which I thought was pretty cool. On top of that, they’re the only breed developed by a woman. The only problem I have is the hatchery I use doesn’t raise them and I won’t buy from a private grower again. Talk about difficult! 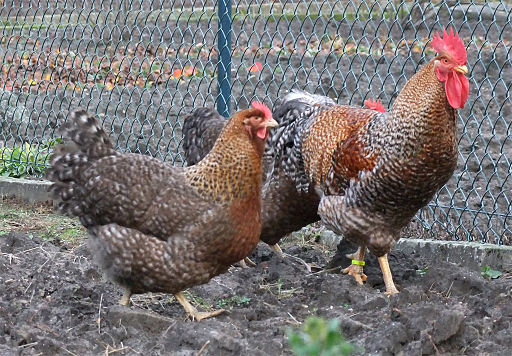 Oh, this is just too hard. Someone told me the Welsummers are great but a breed called the Bielefelder just caught my eye. It’s about the size of a Rhode Island Red: “This fairly new breed is making a huge splash in the poultry world with their dark, chocolate-colored brown eggs, large size, and docile temperament.”

Chocolate brown eggs. I’ve never had those before. Hmm. Back to flipping those virtual pages.