Oh, but this is a sad post to write. Even knowing the possibility of losing Moosie loomed didn’t make it any easier when the moment came. Worst of all, the day came much more quickly than I’d hoped for the very best dog in the world.

Moosie, as I have mentioned in previous posts, had tangled with a javelina some years ago. But only this year did I learn he’d broken his scapula in that battle. The bone healed incorrectly and his whole shoulder was now misaligned. Add to that Moosie’s utter determination to climb trees, clawing with his injured leg, to reach whatever varmint he’d chased into it, and it was a recipe for muscle, tendon and bone disaster.

By the time he could no longer put his left front paw on the ground, the destruction of his leg was more or less complete. I knew right then I was going to lose the best dog in the world.

From the very beginning Moosie was my dog–his choice more than mine as I was still pretty much a confirmed cat addict when he came into my life. Our connection grew steadily stronger as the years passed and we ultimately became partners in farm work rather than owner and pet. He walked with me every day as I did my chores, leading me to the next job on the list and reminding me when I missed something. His eyes were always on me, waiting to see if there was anything else that needed doing. If a critter needed me, he would find me. When one of my four-footers gave birth, he was there, ready to help clean the baby and bring it to its feet.

The calves belonged to him from their first breath, and woe to any cow who thought otherwise. Poor Elsie! When he came to take her heifer Hannah for a walk, she charged him. He not only stood his ground but barked so viciously that she instantly backed off. And then he took Hannah off to teach her to dig for gophers, just as he’d done for all my other calves.

And yet, he was a killer extraordinaire. At least thirty-nine raccoons, more than twenty skunks, otters, beaver, countless gophers and mice…and probably close to forty turkeys and more than thirty chickens. We finally came to an agreement. I locked all the two-footers up at night, he didn’t kill them during the day.

For the past three years he had the occasional shoulder issue, almost always following an attempt to climb a tree. Each time, I’d force him to stay on the porch for a few days and sneak him a few pain killers. A few was all he every took. He disliked feeling dopey (pun sort of intended) and understood pretty quickly that the pills were hidden in his food.  He’d eat his food and spit out the pill which Bear almost always ate, just because.  After a few days of rest, he’d be back to his usual self.

And then he wasn’t.

That’s when the vet discovered the permanent and unfixable damage to his shoulder. We talked then about the possible outcomes, which including him becoming a house dog (impossible), amputation (equally impossible), and of course, that last one. I told her then that the last one was the only viable option for this dog. Moosie might physically survive the loss of his ability to move or his leg but his soul would never survive his loss of freedom. He lived to work the farm. All his joy came from protecting the property from those things he loved to kill.

The weeks passed and nothing we tried gave him any long-term relief from what was clearly becoming wracking pain. This was because the instant there was the slightest improvement of mobility he’d be off at a dead run, destroying what little gain he’d made. Then, aching again, he’d mope sadly on the porch, spitting out pain killers as he watched Bear, his best friend forever, play with Radha.

Two weeks ago, I noticed that the muscles in his left hip began to spasm on and off. By favoring that left front leg, he’d been overworking his left hip, causing yet more physical damage. That’s when I told the vet that turning Moosie into half a dog would kill him just as surely as the permanent solution. Having gotten to know him, she agreed with me but suggested I try one more option. So I started adding Hyaluronic Acid to his food.

Hope stirred when after a week he began to look and act like his old self. He played with Bear and the puppies in the evening. He walked the property with me in the morning. At two weeks of treatment, I had my dog back. Breathing in relief, I left Bear on the porch with Moosie for the night so they could again patrol the property together as they’d done every night for the past five years. Moosie was in his glory. They were both barking at the back fence at midnight. 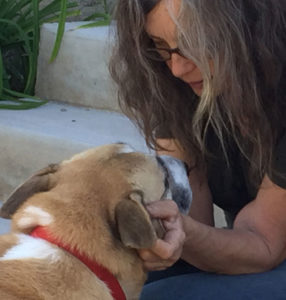 The next morning he was limping. By that afternoon he was clearly in agony. Christina, my ranch manager and pet massage therapist, offered to work on his shoulder. As she reached for him, he put his mouth on her hand, something he only did if he thought her touch would hurt more than help. She pointed out a swollen area across his shoulder. His hip muscles were spasming.

That’s when I knew.  I called the vet to come. When she arrived she confirmed my worst fears. He’d torn both muscles and tendons and might even have rebroken his scapula.

He was in my lap as he went. He’ll be in my heart forever.

4 Responses to Farewell to Moosie