Thank goodness for Gabby Gray.  Without her, I’d have no reason to laugh around here any more. 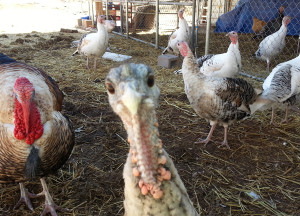 Gabby Gray is one of my two oldest hens.  She and Gabby White were actually raised together here on the farm, only to be parted for a while before Gray finally returned.  Gray is a Narragansett–as you can sort of see from the picture she’s gray, black and white, while White is a Royal Palm, mostly white with black trim.  You can see her behind the grayish-brown hen between White and Gray.  I call them both Gabby because when the two of them see me coming, they make their way to me almost faster than Tom, then talk to me.  Yerp-yerp-yerp-CHEurp-rrrwROWrrrrr???

It’s always framed as a question and is usually uttered with them peering up into my face. I think that means, “As glad as we are that you feed us, we have to tell you that you really are the ugliest looking thing we’ve ever seen.  But that’s okay, we feel sorry for you and like you anyway.”

Both Gray and White started their lives here as 2-day-old poults, although they weren’t my birds when they arrived.  Instead, my friends Mike and Gary had purchased ten Narrangansetts for themselves, but didn’t have the space or equipment to take on newborn poults.  So, they added a few Royal Palms to their order as a gift to me, then talked me into raising the babies for them.  That was back when Tom was only 1 year old and still had his matching hen–we’ll just call her No-name.  Shortly after Gray and White arrived via US Post Office, No-name was taken by a coyote while she nested outside of the safe zone.  Up until that point, I really hadn’t thought much about getting more turkeys. Instead, I was just going to take whatever happened with No-name’s eggs.  Obviously, after she died, nothing happened since the eggs weren’t quite ready to hatch and I didn’t have an incubator.

So, a lonely Tom came to live on the porch with the dogs while the new baby turkeys stayed down in the barn in their giant-economy sized, coffin-shaped brooder that the ex built.  It was always touch and go with that thing.  After accusing me of being careless with the babies when I dragged the bulky and enormously heavy brooder with the attaching pen over one poult’s little leg (not on purpose and it was only bruised), he managed to drop one of the hinged doors on another and killed it.  So there :-b  (That’s a tongue sticking out for all of you who don’t “read” emoticon.)

Four months later, the surviving eight Narrangansetts went to live with Mike and Gary, while the surviving six Royal Palms stayed here.  Three turned into Toms and were eaten when they ganged up on Tom one day.  The other three were hens and the next year they produced forty babies between them.  That was back before the big turkey coop was finished, so I ended up with all the moms and babies living under my bedroom which juts out of the side of the house and is held up on stilts.  I do not under any circumstances recommend keeping turkeys anywhere near where you’d like to sleep.  Over the course of that summer/autumn, I managed to convince them to roost on the greenhouse ribs, which was a little quieter.  They only agreed after the Magnolia branch they had originally chosen broke under the weight of 3 hens and the remaining 30-odd half grown poults.  I think more than a couple of the little guys floated away in the ditch when that happened.

Meanwhile, by then Mike and Gary had almost 20 birds, and one mean Thomas.  (They named him Thomas so we didn’t get confused when we talked about our ‘best boys’.)  Their bad boy had fashion sense as well as a temper, and seriously disliked plaids and colorful patterns.  Woe be to anyone who tried to wear them while on that farm!  As their birds got bigger, the flock discovered the garden.  That’s almost an acre of hand-raised, carefully cultivated high-end veggies.  It was when the tomatoes started disappearing under the ravaging horde that I got the call.

“We can’t keep them all,” Mike said.  “They’re destroying the garden.  Can we bring you ten?  You can keep them for us.”

My philosophy is pretty much always “In for a penny, in for a pound”, which loosely translates to “Why not?”  So, I set up an isolation pen where Gabby Gray and two of her sisters plus eight babies were to live for their first week back on the property.  Even with chain link between the two flocks, it was an all out hen-war, the Whites against the Grays, with Tom trying to be a peacemaker by pushing his way between his original hens and the fencing.  One week became two and things still hadn’t improved much, so I figured it was Darwin-time.  Survival of the fittest.  I freed the more aggressive Narrangansetts and, even though there were more Royal Palms, for weeks feathers flew with no advantage gained on either side.  After many a twisted snood and bloodied head, someone came to their senses and declared a truce.  The results were that the Grays still kept to themselves, roosting with their own color, while the Whites strutted around as if they had bragging rights. False bravada!  Even I could see that if Mike had brought just one more Gray, every last White would have been driven into hiding.

Then Thanksgiving came and Mike and Gary took back the young turkeys as meals while I kept the three hens, Gabby Gray among them. As for me, I culled my original flock down to fifteen, a mix of Royal Palms and first generation hybrids of Tom and the Palms.  After a winter of huddling together, the Grays still keeping to their own color, spring came and the miracle happened.  Gabby Gray and Gabby White both wanted the prime nesting spot–at the back of a pile of hale bales by the cow stalls.  Day after day, they laid their eggs in the same spot.  So did one of the Australorp chickens.  Then, with no one willing to give up the spot, they all three chose to sit together on their eggs.  On the days when the two turkey hens would take a break, leaving the smaller chicken in charge, the little black girl would spread her wings and flatten her body trying to cover all of the much larger turkey eggs; it was a lot of work for the single chick she got out of the deal.

The Gabbys were the first to hatch out their eggs and, much to my surprise, neither one of them paid any attention to what color the babies were.  Maybe that’s because there were so many different colors.  Some of the poults were the bright yellow of the Royal Palm, some the brown and gold of the Narrangansetts while most of them were the beautiful mottled golden brown that marked them as Tom-hybrids.  I can already see this year that they intend to do the same thing again, only this time I think they’re inviting me to join them.

I think that’s the point of the urgent conversations they direct toward me.  I’m now in their special club.  Although White follows me as I go about my turkey-related chores, Gabby Gray has become really bold about trying to persuade me.  A couple of days ago I was sitting on the far barn’s concrete footing, my back to the fencing that encloses the new nesting area.  Gray came up next to me and yerped for a while.  When she’d said it all, she pushed behind me, her wing against my back.  Not even Tom does that. 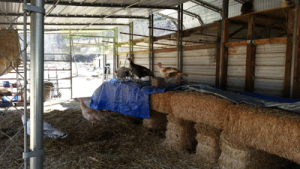 Uncertain how she might react–and lordy, I know what she can do with that beak!–I reached out and stroked her back.  She stood perfectly still and enjoyed it until I finally got up.  Then I took out my phone, intending to take a picture of the new nesting area.  But, the minute the phone with its bright orange case was out, there Gray was, asking me what I was doing.  I pointed and clicked.  Farm-Bomb!

By the way, here’s that new, highly suggested nesting area…and I do have turkeys laying eggs there!