It’s only been a few years since I last had dairy cows on the property, but in that short time I completely forgot how awful the flies are.  However, before I get into discussing the pestilence of flies, I need to get you caught up on general cow news.

Who knew how annoying it was to be a cow’s bestest ever best friend? I sure didn’t, but Miss June is doing her absolute utmost to teach me. She cries when she can’t see me. She cries when she sees me walking away from her. She bounces after me when I reappear. And, like Tom, she seriously likes my friend Laurie. Tom now knows the sound of Laurie’s car. Within minutes of her arrival, he starts making his way toward the house, gobbling in invitation for her to greet him. As for June, I suspect her first human, the one with whom she bonded, was blonde, as is Laurie. Let me just add, I’m not adverse to letting June pour out her big heart on someone else for a while.

After deciding instantaneously upon seeing June that she was pregnant, once I got her home I began to worry. This is most likely because she lost weight over that first week while she was still viewing the idea of grazing as abhorrent. That’s changed now. She spent all of last week with her nose to the ground, grazing for hours. And this week I’ve watched in relief as her udder slowly and steadily begins to swell. That’s not something that dry and/or barren cows do. It only happens when there’s a baby on board.

That said, it’s also not something pregnant cows do when their baby isn’t due for another 3 months. Of course, I didn’t ask exactly when she was exposed to the bull. Knowing she was due in September was enough, because I tend to drive myself crazy wondering if this day is IT once we hit 270 days.

Now that you know I’m second-guessing myself about owning this particular cow, I’ll move on to the fly situation. Flies love cows. Flies love cows so much that you sometimes wonder how the cows survive being covered in flies. They’re on her back, her legs, her belly, but they especially love to crawl around her eyes. Getting close to her means the flies move from her to me. Ugh. Just ugh.

I bought a (small horse-sized) fly mask for her, which she absolutely refuses to let me strap over her nose. I guess I can’t blame her. Wearing netting over my eyes would drive me crazy as well. Because none of my previous cows were any more excited about fly masks, I  also bought a fly spray. Being me, any conventional pesticide-laced spray is out, as that would send me to the hospital. So I opted for a natural spray, which contains essential oils, including citronella, clove, mint, and thyme.

It worked a little, meaning there were somewhat fewer flies in her eyes, but she hated it. The minute I showed up with the sprayer, off she’d go. It’s the only time I was chasing her instead of she chasing me. So I asked Laurie, who works with essential oils on a daily basis. Peppermint, she thought.

Well that’s easy enough. I have an almost unlimited supply of peppermint on the property. Someone, many years ago, planted peppermint along Oak Creek upstream from me. If you’ve ever planted mint, you know what happened after that. Let’s just say it smells like peppermint with every step I take along the creek bank. I harvested an armful of peppermint and made a very strong tea out of it as my spray base, then added some lavender oil because I didn’t have the rosemary, clove, thyme or other oils my recipe book (Google) suggested. 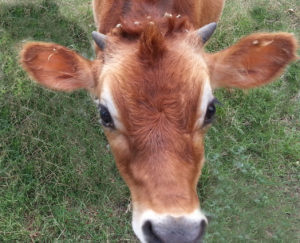 I was completely underwhelmed by the results. I consulted Laurie again, who suggested weaving a wreath of peppermint and putting it around June’s neck. Oddly, that instantly took me to an image of a Medieval illuminated manuscript I once saw. It showed a pair of oxen pulling a cart. Both oxen were wearing wreaths around their necks. The lightbulb went on over my head. Not some festive decoration, then! This was our ancestors trying to keep the flies off their livestock and, by extension, themselves. I have a bay tree. I wonder if a bay wreath would do the trick? This picture is of Brighty’s calf Georgie, who is wearing a crown of Horehound blossoms. That’s a possibility for fly relief as well, or it would be if the sheep hadn’t eaten all the Horehound on the property.

Of course, the real trick would be getting June to wear a bay wreath. Somehow I doubt she’d be willing to go there.

After the peppermint spray failed Laurie got creative. What finally worked was coconut oil mixed with a blend of essential oils: jojoba, lemon-scented ironbark (a type of eucalyptus), geranium, rosemary, jasmine sambak, and black pepper. Laurie spread a little on June’s forehead, on her spine and on her ears. I went out a few hours later and there were no flies on that cow. And she smelled good!

Then, because I had a pile of dried rosemary hanging out on my patio table, I made rosemary tea, thinking to use that as a base for another attempt at fly spray. Instead, I learned that boiling fresh rosemary in plain water is a wonderful way to freshen the air in your house. That, and it makes a great hair rinse. Ask Moosie, I’m sure he’ll agree.  That #@$% dog rolled in the guts of something long dead and ended up in my bathtub. I figured the rosemary might work like fleabane, so I doused him with it after I’d finished scrubbing him. He smells much better and is presently fly-free.

As am I. Whew. But now I have to clean my bathroom. Ugh. Just ugh.