Most of the time I love living next to Oak Creek. The water tumbles merrily in the cool shade of the tall trees as the otters hunt for crayfish. On a hot summer day, I can walk down the creek about a half a mile to where the bank rises about ten feet above my head. It’s basalt here but the stone is ancient and crumbling. Springs seeps out of the cracks and brilliant green moss covers the stone face. Giant tadpoles, the spawn of bullfrogs, swim around my legs while I push through towering cattails. With every step I smell peppermint. (Some early settler must have planted mint along the creek; it’s everywhere.)

But this month has shown me a different face of the creek. Our first flood two weeks ago brought the creek up about nine feet, which was impressive but surprisingly benign. It barely uprooted some of the temporary fencing I keep along the creek so my sheep can graze near the water. Within a day or two, I’d reset the step-in posts and the sheep were leaving their footprints on the thick new layer of silt. I breathed a sigh of relief, grateful to have dodged the bullet. 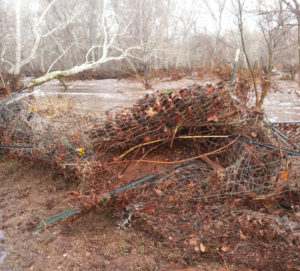 I breathed too soon. The rain started around Monday, then stayed steady. I gritted my teeth and kept my fingers crossed, only to gag on Wednesday when I saw the USGS (United States Geological Survey) warning predicting 13 feet Thursday night/Friday morning. That put the water level over the top of my middle pasture fencing! I spent the day pulling up all the temporary fence I could, then went to bed praying the government had gotten it wrong.

I woke up at 2 AM on Friday morning and heard the roar. It was bad. Really bad. The USGS was right on. The water crested at 13 feet at 14,000 cubic feet per second. 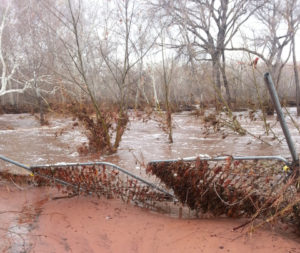 The water was still over 10 feet at 7 AM when I went out to feed. The whole back of my property had been underwater at some time during the night, the water reaching almost to the turkey barn. The surge had been so powerful it had uprooted six-foot-tall metal “T” posts and torn four-foot-tall mesh horse fencing to pieces. I found mesh fencing tangled into little balls. Several “T” posts had been bent around tree trunks. Gates were metal knots. No fencing was left upright from the huge sycamore at the middle of my property to the far fence which was half gone. That sycamore is also in trouble. It sits at the point where the creek turns and its roots are now hanging in midair. If it falls over the creek, I’ll have a new bridge. If it falls back on the property, I’ll have a new wooden fence of sorts, since it will knock over its nearby sister as it falls.

It wasn’t until the water finally fell below five feet that I realized why my property flooded. Until then, I couldn’t see the opposite side of the creek. A thick line of trees fills that bank and over the course of the flood the water had woven whole trees and giant branches between them until it looks like a wall made of basketry, then coated everything with piles of silt. The opposite bank is now 15 feet taller than my side of the creek. That left the water nowhere else to go except onto my pastures.

And that’s where it will go again next week. The new guy in my life persists in informing me that the USGS is again predicting a flood. Each time he tells me that, I put my fingers in my ears and say, “La-la-la.” I’m taking hope from the locals who assure me this last flood, which is the 4th highest in recent history, won’t be repeated any time soon. I have to believe! My fences are already back up again.