When I say “free water” I do not mean the stuff that’s been falling from the skies so copiously of late.  Although that free water is really nice and has saved me much time dragging hoses and running sprinklers this summer, the free water I’m talking about is the water that comes from the spring, my drinking water.  Having that sort of free water is the kind of thing that makes real estate agents sing. They might tell me things like “You will have more water than you know what to do with” and “You’ll have water forever.”

And yes, that’s actually, sort of, true. Page Springs, which is the source of my water, runs all day, every day, and produces almost 15 million gallons a day. (Yes, this is Arizona.) According to a geologist with whom I spoke, the spring will do this in perpetuity. Doesn’t that sound amazing?

But like any other real estate claim, this one needed to be taken with a great big grain of salt and a few arsenic filters. Take, for example, the fact that I am not on any water delivery system and I have to maintain my own water treatment and delivery plant, which includes a sand filter, a charcoal filter, a pair of arsenic filters, a paper mud-collecting filter, and two UV lights.  I don’t do well with chlorine.

Water that technically doesn’t cost me anything has turned out to be pretty costly, and it cost me again yesterday. This time the cost wasn’t in equipment but in time and effort.

Sunday is my chore day and right in the middle of cleaning the chicken coop I took a detour to bring some fallen apples and branches to the sheep who are unhappily grazing on my wild hillside right now.

That was my resolution to last week’s Cinco attack, to move them up onto that hillside where he’s fenced away from everyone, including me. Actually, it’s perfect for them right now because of all the free water that’s been falling from the skies. The blackberries have gone crazy.  The alder trees have branches reaching to the ground–they love the alder leaves.  The grass is coming in fresh and green. However perfect for them does not equate to them loving the hillside. There’s been lots of complaining, mostly because they can’t get to the pig food.  Dorper sheep are supposed to gain 100% of their weight on grass but no one asked them what they prefer, and it’s definitely pig food.

Bear isn’t really thrilled about their move either. Because they’re fenced into that area, making it dog-inaccessible, he’s had to spend his nights with them instead of on the porch.  I tried putting Moosie over there with him, but Moose knows every gap and hole, and just makes his way back to the porch.  I let that go, figuring if he knows how to get out, he also knows how to get in. If Bear needs him, he’ll show up.

Bear tried to complain the other night when the rain started to come down. I considered showing him the picture I took of him sitting in the rain two weeks ago. Mr. Almost Impervious to Inclement Weather hasn’t a leg to stand on when it comes to complaining about the weather. That’s especially true at the moment as his fur has almost grown out.  Time for another buzz cut.

Anyway, back to my “free” water. So on this detour I came across an unexpected lake, right at the pump house foundation. Crap! I immediately returned to the barn and gathered up shovels, a pick axe and my pvc plumbing bucket. This is how I organize for chores. I have a bucket filled with fencing repair tools, one for plumbing tools, etc. The idea is to keep me from having to walk back the length of a football field to the front barn for that one tool I needed and forgot. It’s a good idea, but it rarely works out that way.

Silly me.  That’ll teach me to say out loud that I really needed to do something physical after being stuck in my chair at the computer all week. I’ll be careful to mind my tongue next weekend.

I did have warning that this was coming, but didn’t realize what my pressure pump, which speaks in icons, was trying to tell me. Back on Friday my pressure pump indicated that I had a leak. I went through the jungle of piping, checking valve handles.  All of them were where they were supposed to be. I went through the house and checked every faucet and toilet. No leaks there.  Now, on Sunday, it was obvious that whatever the pressure pump was trying to tell me was leaking was right below the pump house.

The first place I went to check was to the pipe that my neighbor and I had kluged together a year and a half ago. Very surprisingly our rubber coupling continues to hold water. It’s on my list to dig out that whole area and remove the defunct sprinkler pipes, then reset that pipe, which carries water from the tank back into the pump house to go through all the treatments before hitting the house.

Following the water, I finally found the culprit.  The walnut tree next to the pump house (Who let that grow there some twenty-odd years ago, huh?) had sent a root into a pvc coupling on a pipe that ran right by its trunk before turning to enter the pump house. Or so I thought that was where that pipe went.

With my handy-dandy bucket at the ready, I sat in the mud and cut out the broken coupling.  Water dribbled steadily from the pipe. Well, that had me scratching my head. Still, I walked back down to the barn and got a length of 1.5 inch pvc pipe, all three of my 1.5 inch couplings and headed back up to the pump house. Water was still dribbling from that pipe.

The last thing I wanted to do was cut and paste in pvc while the water was still running, so I called for my neighbor Al. He came with his wife Elana, whose job is to supervise and see that neither Al nor I killed ourselves. We discussed the water for awhile, then he went back to his place and came back with a screw-on coupling as well as a rubber coupling similar to the one we’d used on our previous fix.

We started with the pvc screw-on coupling and fit it into place, then I went through the pump house turning everything back on. I wasn’t until I hit the “on” button for the pressure pump that I realized why the water hadn’t stopped dribbling from that pipe. All of a sudden I could hear water rushing through our newly fixed pipe.  That line didn’t go into the pump house, it was bringing water out of the pump house and sending it into the house. That dribble was my house draining back to the pump house. What?!  Why would you put the out-pipe on the far side of the pump house?  Go figure. 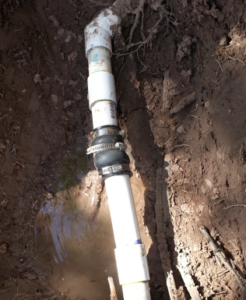 We three all stood and watched the new coupling. It was holding, so we congratulated ourselves on a job well done, and they went home for lunch.  I stayed a little longer, just in case. Which turned out to be a good thing because about five minutes later the screw-on coupling popped.  So, I turned everything back off again, and undid the coupling.  Because I had everything I needed, I now cut out the old pipe, which proved to be very brittle, and started building the new piece I wanted to insert.  When it came time to put it together, I suddenly discovered I didn’t quite have the arm strength to get it in place.  So, back I walked to my neighbor’s house, this time asking if I could have that rubber coupling. Elana found it for me and back I walked to my house (at least another two football field lengths) and started to put that coupling in place. I had it almost screwed on when Al appeared. We watched together as I turned all the pumps and valves back to the “on” position.

Battle of the Bulge

It didn’t make five minutes before the pressure in the pipe had water squirting everywhere. Now it was Al’s turn.  He took my insert piece, cut it in half, coupled/glued the two pieces to the existing pipe ends. They fit so the two cut ends butted together. After that, he powered on the rubber coupling to hold those two ends together. After screwing it in place, we turned all the equipment back on and…Voila! It held. It bulged but it held.  Just in case, Al added another hose clamp to the center of the coupling. And once again we congratulated ourselves on a job well done.

It lasted until this morning.  The bulge ended up pushing one of the pipe ends out of alignment. This time Al came back with the perfect coupling (I hope). We dug again for a little bit, he cut, he fitted, I pushed pipes this way and that, until, once again…Voila! The fix is holding.

I am not filling in the hole for a week, just in case. Maybe, if I leave it all open for a bit and leave my plumbing bucket in the pump house, I’ll be motivated to cut away all that old piping and fix the other line while everything’s exposed.