Yeah, not that kind of edgy. Edge-y. As in sharpening knifes because last Saturday I had no sharp knives. None. Nada. Nil.

It was that day that my friend Mike brought fourteen Buff Orpington roosters by to turn into food. I can hear all of you who know what a Buff Orpington is groaning at that. Trust me, I’ve told Mike more than once that there’s no such thing as a “dual-use” chicken. There are only two types of chickens: meat birds or egg-laying birds, and never the twain shall substitute for the other.

But he bought a straight run of Orpington chicks with the idea of raising his own Orps, knowing that he’d get more roosters than he could keep. Indeed, he ended up with eight hens and fifteen roosters. He kept the gentlest rooster for his hens–wise move!–and brought the other boys here. If he was hoping for roasters, he was disappointed.

Let me say, they were worlds different from my Cornish hens that I’d done the previous week. I really liked those birds a lot , so much that I’ve ordered another batch to arrive at the end of September. Yes, those are, or are supposed to be the tiny little single-serving sized chickens. However, when I read that they make a great roasting hen, I let them grow an additional month and they exceeded all my expectations, coming in at around eight pounds each. More importantly and unlike the Cornish Cross, which are your standard supermarket chicken, they did a lot of grazing. saving me money on feed.

Mike’s Orp boys looked big enough with all their feathers intact, but once plucked it was clear that they were mostly bone, and not much flesh. That is, except on their legs. I’ve never seen Orps that tall! The upside to nice, thick bones is that they’re sure to make really good soup. I’ll be packaging them tomorrow and am a little worried that they won’t fit into the bags I use for my birds.

Hmm, note to self: order some turkey-sized bags just to have on hand. (I’d better order both small and large turkey bags because those Blue Slate toms of mine are also exceeding expectation. I tried to lift one the other day as I was “rescuing” them from a place they weren’t supposed to be. Yikes! He was over twenty pounds for certain and it’s only just September.)

Happily, Christina and my friend Laurie showed up to help with the Orps. That’s because both women are determined to nail the process. As Laurie started her first bird, she dropped her knife–a nice Chicago Cutlery fillet knife that I found at a thrift shop for pennies–in disgust. “It’s not sharp,” she complained.

It’s the same complaint I’ve had for all my knives over the last month. My life has gotten so busy that I haven’t had time to do lots of little jobs, like sharpen blades. In fact, in the kitchen I’m down to using a knife I don’t like because it is the only sharp knife left in my drawer. Time is the only excuse I’ve got for letting everything get so dull. (You may read that sentence any way you like.)  After all, I have all the equipment I need: four nice stones, several steels, one hand-held thing with a slot that’s supposed to sharpen an edge, and a Ken Onion knife sharpening machine.

For the record I have no idea who Ken Onion is, or why he uses a Halloween font to inscribe his name on the front of his little machine. Also for the record, I’ve had that machine for maybe seven years and have yet to take the time to figure out how to use it correctly.  Still, I plugged it in and showed it to Laurie, who immediately ran her knife across the belt only to discover that this made the edge even more dull.

Dang. We handed Mike the stone and gave him the task of keeping some edge on the knives while we got the job done. He did his part well enough that we were finished in record time. As we were cleaning up, Christina took a look at the little knife-sharpening machine, then revealed something astonishing. She actually knows how to sharpen knives! 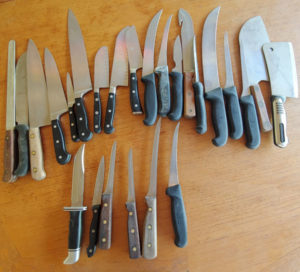 I almost dropped to my knees in relief. At last, someone who could teach me what I most need to know!

Sunday, she brought the set-up up to the porch along with the five knives she thought were “all” my slaughtering knives. We read the instructions together and she explained all the things I didn’t understand. It’s amazing the difference that makes. The five knives she did are wonderful.

Now that I know what to do I have no more excuses. Witness the knives I need to do and take heed. I’m setting it in stone–or perhaps steel. This week, I’m getting edge-y. By next week’s post, all my knives are going to be sharp.

Then I’m going to start on my tools, because apparently the machine does tools as well!